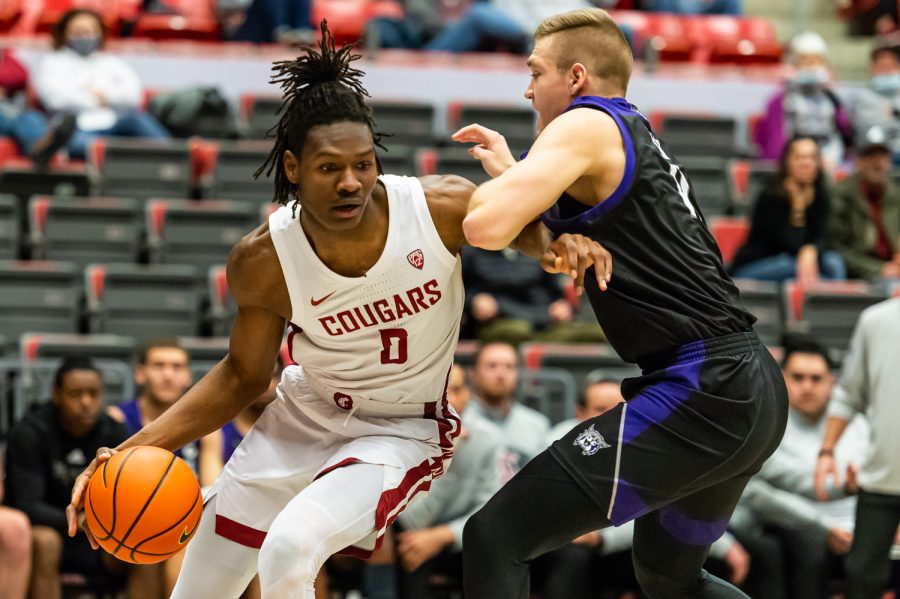 WSU forward Efe Abogidi (0) dribbles the ball toward the basket during a college basketball game against Weber State University at Beasley Coliseum, Wednesday, Dec. 8, 2021, in Pullman.

The WSU men’s basketball team (7-3) looks to add another win to the record against New Mexico State (8-2) at 7 p.m. tonight in Beasley Coliseum.

The Cougs are fresh off an upset loss against South Dakota State, 77-74. WSU played a good game overall but fell short due to poor shooting late in the game. The Cougars were dealing with some illnesses on the team, including Noah Williams, who will be a big part of the WSU offense against New Mexico State.

The Aggies stroll into Pullman on a three-game win streak, most recently beating Loyola Marymount, 63-58. New Mexico State has yet to play a conference game so far this season. Before conference play, the Aggies are in a four-way tie for first place in the Western Athletic Conference.

“Another really good program that’s used to winning,” WSU head coach Kyle Smith said about New Mexico State. “They have a lot of high-major transfers that play for them, good depth, they’re older. It’ll be a good challenge.”

Michael Flowers leads WSU with 14.1 points per game. Flowers will likely have another double-digit performance against the Aggies on Wednesday. His ability to score anywhere on the court is vital for a Cougar victory against New Mexico State. He comes into today’s game hot off a season-high 24 points against South Dakota State.

Williams should be healthy for Wednesday after battling an illness in the South Dakota State game. Williams had a lackluster performance while under the weather, putting up six points with an 11.1 percent field goal rate. Even with the poor performance against South Dakota State, Williams is the second-highest scoring player on the WSU roster. So far this season, Williams is averaging 13.1 points per game and leads the team in assists with 2.8 per game.

“He gets us paint touches, he puts a lot of pressure on the defense at the point of attack,” Smith said about Williams. “He’s a big guard that can get in the lane, he can draw fouls, he’s a good, willing passer.”

Junior guard Teddy Allen leads New Mexico State’s offense with an impressive 17.6 points per game. The 6-foot-6 Arizona native is clutch from the free-throw line, shooting 90 percent so far this season. Allen also leads the team in rebounds with 6.7 rebounds per game.

Both teams have similar, positive records so far this season. Even with similar records, WSU is heavily favored to win the home game. WSU has an 86.7 percent chance of winning the matchup according to ESPN’s Basketball Power Index.

Historically, WSU is 1-2 against New Mexico State. Their most recent matchup was during the 2019 season when the Cougs beat the Aggies for the first time in school history, 63-54. A Cougar win on Wednesday would bring the overall record between the two programs back to an even 2-2.

“Coach [Chris] Jans [has] been there a long time,” Smith said. “They win 25 every year, so they’re used to winning, and that’s good for our young bigs to understand that you got to bring it every night.”