WSU now 0-2 this season in Spokane 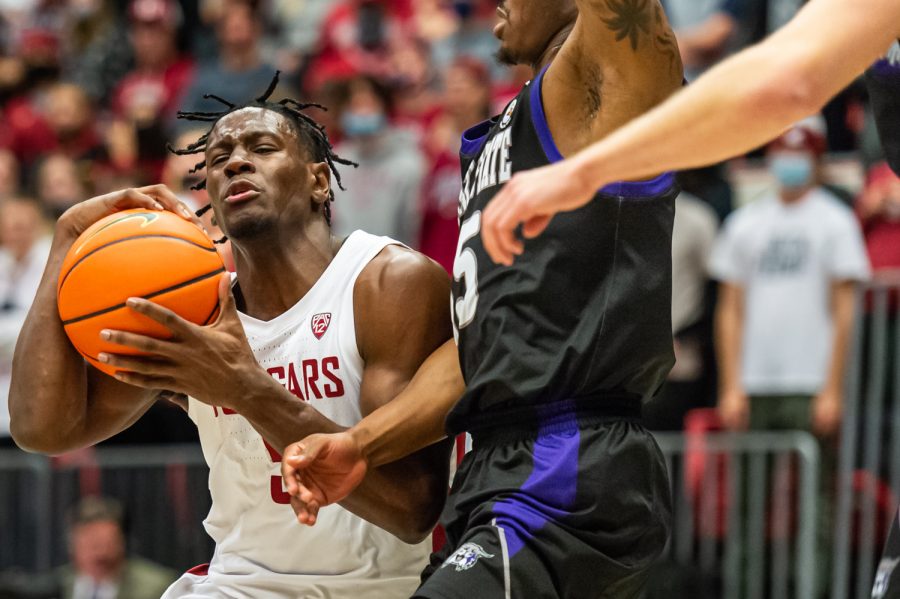 The low scoring game featured abysmal shooting from WSU who shot 31 percent as a team on field goals. Boise State fared a little better, shooting 36 percent from the court.

“You are what your record is,” WSU head coach Kyle Smith said. “So we’re 8-5, we’d like to be better. We’ve been poor in close games, that’s evident. We’re either going to break through and get tougher and win some of these or we’ll fold.”

“They’re so big and long and they switch things,” Smith said. “They make it really challenging to score. They started that second half, we couldn’t score and that kind of snowballed.”

The refereeing squad of Chris Rastatter, Deron White and Rick O’Neill called a total of 41 fouls in the game. You read that right, more fouls were called than minutes in the game.

One of the questionable fouls was called on DJ Rodman during a crucial part of the game. Rodman was called for an intentional foul on a play that seemed anything but intentional with the Cougs trailing by four points. The foul was Rodman’s fifth personal foul of the night, causing him to foul out of the game.

Rodman was joined by TJ Bamba and Mouhamed Gueye who both fouled out after racking up personal fouls in the first half. Together, the three players combined for just three points. Rodman’s shaky performance comes after a career-best 21-point performance against Northern Colorado earlier in the week.

The Boise State squad stepped up their free-throw game against WSU, going 18-21 from the line. Before the win over WSU, the Broncos were shooting just 58 percent on free-throws.

Three Boise State players combined for 45 of the Broncos’ 58 points. Kigab, Marcus Shaver Jr. and Tyson Degenhart were the difference makers in Boise’s away-game victory. Shaver Jr. was responsible for 15 points and two of Boise’s four three-pointers. Degenhart followed close behind with 11 points and six rebounds.

WSU guard Tyrell Roberts led the Cougars offense with 16 points, going 3-10 on three-point attempts and 5-16 overall. Before the game against Boise State, Roberts was in a bit of a slump from behind the arc. Since the loss against Eastern Washington, Roberts had shot 3-21 from range. Going into conference play, Roberts needs to be a consistent shooter if WSU wants a shot at the Pac-12 championship.

WSU forward Andrej Jakimovski put up his first career double-double performance with 11 points and 12 rebounds in the loss. Jakimovski showed some growth in his game, able to drive to the basket and come away with points. If he can develop his game in the paint further, Jakimovski will be a threat both outside the arc and close to the basket come Pac-12 play.

“I got a double-double, but it doesn’t matter, we didn’t win,” Jakimovski said. “It’s all about winning the game. I can’t be happy with that. I have to play with more confidence and I think I can do better than this.”

The quick whistles of the referees forced WSU forwards Efe Abogidi and Gueye to play with less aggressiveness on defense. Boise State took advantage of the light defense close to the rim, scoring the majority of their field goals on two-point attempts.