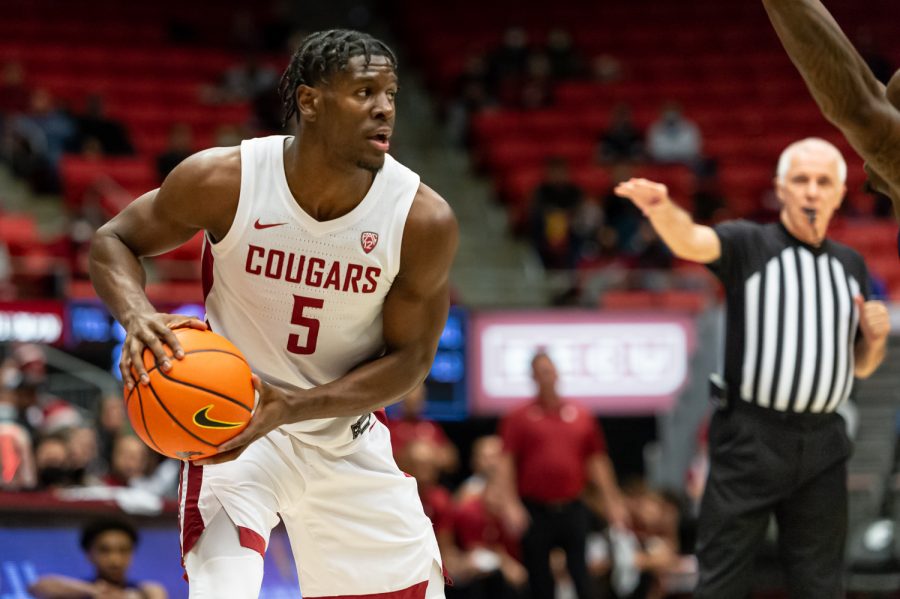 WSU guard TJ Bamba (5) looks for someone to pass the ball to during a college basketball game against Weber State University at Beasley Coliseum, Wednesday, Dec. 8, 2021.

The Cougs open the new year with a loss against the University of Colorado Buffaloes, 83-78.

“Good entertaining Pac-12 road game, we made pretty good effort,” WSU head coach Kyle Smith said. “But you have to play really well to play on the road and we didn’t play well enough.”

The Cougs were off to a slower start than usual, missing junior guard Noah Williams. Thursday’s game was also the first time WSU had taken the court since Dec. 22 due to COVID-19 protocols. Sophomore guard T.J. Bamba had a homecoming 21st birthday in Colorado. Bamba played high school basketball at Abraham Lincoln High School in Denver.

This would turn out to be a big night for Roberts, scoring a season-high 25 points. Roberts’ performance against the Buffs was his second game of the season with more than 20 points.

Bamba also had a standout game for his 21st birthday. Bamba seems to feel at home playing in Colorado. In Thursday’s game, Bamba put up 14 points. Last season, Bamba put up 13 points in Boulder. Bamba’s 14-point outing is his sixth double-digit scoring game of the season.

Forward Efe Abogidi had 16 points on the night and led the Cougars with 10 rebounds. Abogidi’s double-double performance ended prematurely, fouling out during the second half.

Gueye had a relatively quiet night with three steals. Colorado’s tendency to drive to the basket was difficult for Gueye to defend against throughout the game.

Both teams had a relatively slow first half, with the Cougs up 38-37 at halftime.

The two teams went back and forth for the first five minutes of the second half, keeping the game close on both ends of the court. The Buffs went on a 13-2 run in the latter part of the second half, gaining momentum and scoring in transition. Jackson’s night ended early, fouling out during Colorado’s rally.

“We got out-competed, we have to grow up and compete better,”  Smith said. “Efe did a good job and Dishon did a better job in the second half. It wasn’t good enough and to beat someone on the road we have to have tremendous effort.”

The Cougs were held to a 26.9 three-point percentage compared to the Buffs who had a 40 percent night from deep. Overall, WSU was 7-26 on the night behind the arc. When it came to field goals, the Cougars shot 45.9 percent and made 28-61 attempts. The Buffs had a slightly better field goal percentage, shooting 51.8 percent on the night. The Cougs ended the night with 11 turnovers.

“We gotta stay consistent,” Roberts said. “I think as a whole for a team we are really young and in situations like this it shows. The only thing we can do is stick together and keep it pushing.”

Leading the scoring for the Buffs were the program’s top three players. Senior forward Evan Battey led with 20 points. Battery has been a force for the Buffs all season. Sophomore guard Keeshawn Barthelemy had 17 points, four rebounds and four assists. Barthelemy also topped off the night with one block. Rounding out the top scorers for the Buffs was sophomore Jabari Walker. Walker had 16 points and also led the team with eight rebounds.

This was WSU’s first game in about 15 days. It was not the outcome that fans, coaches or players were hoping for. However, as Smith said earlier this week, this game was going to be some sort of a reboot for the program.

“Honestly I think it was good for us in some ways,” Roberts said. “It was good for our bodies and for our minds a little bit. We still got a few days of practice in before it was time to get active and come up here. I think we really got after it but let it slip away.”

The Cougs have either had significant wins or close losses this season. Thursday’s game against the Buffs proved to be another close loss.

The Cougs continue their road series against Utah this Saturday at 3 p.m.