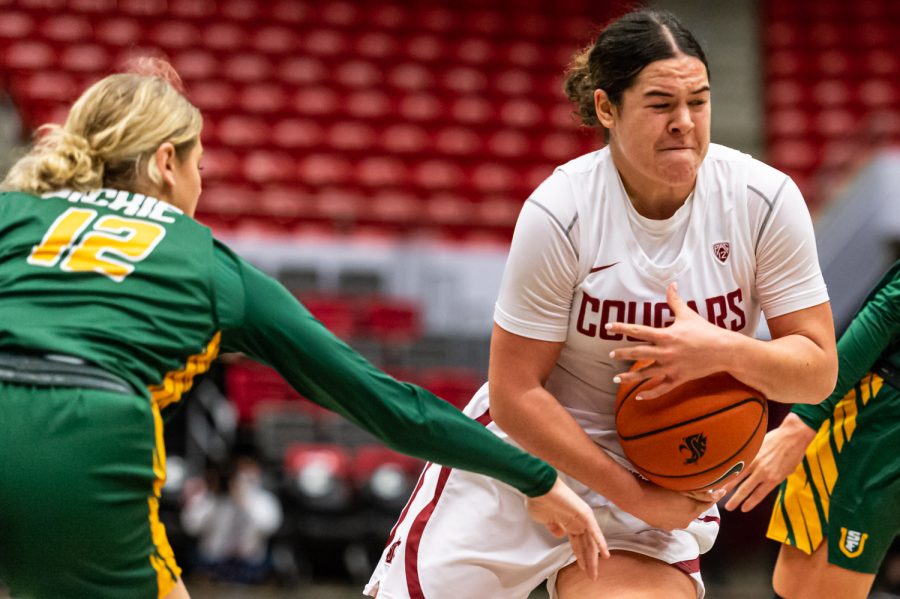 WSU guard Charlisse Leger-Walker protects the ball while running up for a layup during a college basketball game against the University of San Francisco in Beasley Colliseum, Dec. 3, 2021, in Pullman, Wash.

The WSU women’s basketball team lost a close matchup against No. 4 Arizona 60-52 in Tucson.

This was the fourth time this season WSU has played a team ranked inside the top-25. The Cougs have yet to win against a ranked team, now 0-4 against top-25 teams.

The Cougars struggled in the first quarter, shooting 2-12 and 0-3 from behind the arc.

WSU brought more energy in the second quarter, leading 24-23 at the end of the half. Johanna Teder led the Cougs in points with eight to end the half. Teder and Krystal Leger-Walker led the way for the Cougars and carried momentum to help move the offense along. The Cougs proved resilient against the reigning national runner-up, trading leads with the Wildcats.

With Friday’s defeat, WSU’s losing streak extends to three games. This is the first time this season that the Cougars had back-to-back ranked games, falling to the reigning national champion Stanford Cardinal, 82-44 earlier in the week.

Krystal Leger-Walker led the way for the Cougars with 12 points. She was one of the few reasons why the Cougars were able to keep the game close. Bella Murekatete had an impressive game, scoring 11 points. Charlisse Leger-Walker, one of the Pac-12’s best scorers, had just seven points in Friday’s game. She had a rough night on offense, shooting 3-13 overall and just 1-8 from behind the arc.

The Leger-Walker sisters had a family reunion in Tucson, with parents Eliu and Leanne in attendance.

“I’m disappointed that we lost the game,” WSU head coach Kamie Ethridge said. “I loved the way we battled, I loved the way our kids competed. I thought we battled back after the beginning of the game when we really were a little bit rattled.”

Despite the loss versus the national championship runner-ups, the fight and determination that the Cougars showcased was something to be proud of.

The Wildcats’ win over WSU is Arizona head coach Adia Barnes’ 100th win at the helm of the Arizona program.

The Cougars will be back in action on Friday against USC at Galen Center in Los Angeles.