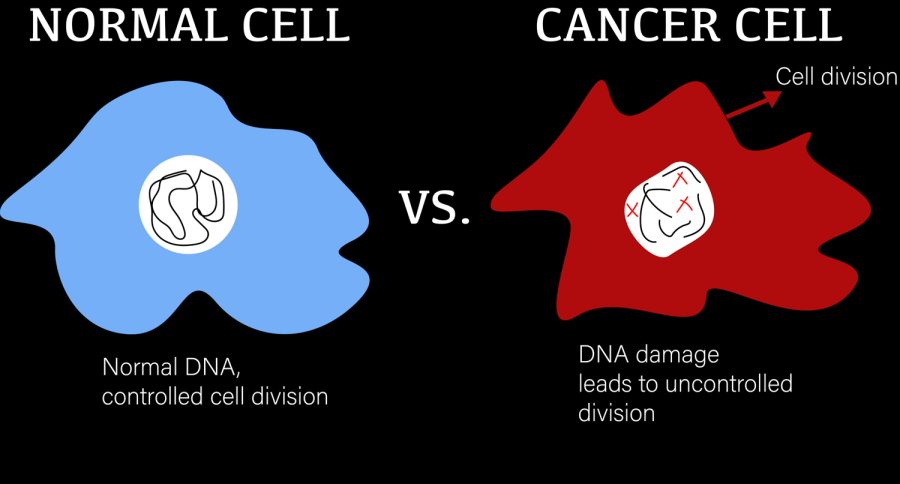 "However, there are potentially dozens of other genes, that, when mutated, could cause cancer," Magnuson said.

Cancer is the second leading cause of death in the U.S., and the rates have only increased in recent years — but what exactly is cancer, and can we prevent it?

Cancer occurs when a cell divides uncontrollably, said Nancy Magnuson, WSU School of Molecular Biosciences emeritus professor. Healthy cells exhibit contact inhibition, which means they stop dividing when they come into contact with other cells. This prevents the formation of tumors.

Some genes are known as proto-oncogenes, meaning they have the potential to cause cancer. If these genes mutate, they become oncogenes and can cause cells to divide uncontrollably, Roberts said.

Cells need genes that signal them to divide, Magnuson said. This enhances survival as part of the normal cell cycle. However, when those genes mutate, it is no longer healthy for the cell.

Magnuson said she researched a gene called PIM-1, which is involved in phosphorylating other proteins. This means it adds a small molecule to the protein, which turns them on, essentially acting as a molecular signal for the cell to divide.

Some cancer patients have higher levels of the PIM-1 protein in their tumors, so scientists think it could be involved in causing cancer, she said.

Mutations in genes classified as tumor suppressors can also contribute to the formation of cancer, Roberts said. Tumor suppressor genes cause the stopping of cell division. When mutated, cells do not receive the signal to stop and can continue dividing.

An example of a tumor suppressor gene is one called p53, which is known as the “guardian of the genome.” Its role is to trigger cell death when there is something wrong with the cell.

Similar to PIM-1, a mutation in p53 could lead to cancer, Roberts said. Without the mechanism telling mutated cells to die, they are free to divide and create more mutated cells.

However, there are potentially dozens of other genes that, when mutated, could cause cancer, Magnuson said.

Unfortunately, cells acquire mutations over time as a result of dividing and having to make copies of their DNA. That means the more cells divide, the greater likelihood someone will develop a cancer-causing mutation, Roberts said.

“There’s going to be a certain amount of luck to whether you get a tumor because the mutagenic process is part of what your body does normally,” Roberts said. “But what you try to avoid is accelerating the rate that you pick up mutations.”

Roberts said there are a large number of cancer-causing agents, some of which are environmental. However, many mutations originate as a result of natural cellular processes.

“[We study] normal proteins that we express that cause those mutations, and these are the cytidine deaminases,” Roberts said. “They are the second-most abundant cause of mutation.”

Researchers can identify what mutations resulted from certain environmental exposures by sequencing a tumor and looking at the proteins that are present in it, he said.

Cigarette smoke is an example of an environmental cause. Smoking, as well as insecticides and other carcinogens, can cause DNA mutations that increase the likelihood of cancer in some people, Magnuson said.

Compared to other potential causes, scientists have the strongest evidence that cigarette smoke causes cancer, Roberts said. Many of the chemicals that enter the body when you smoke cause DNA mutations.

Ultraviolet light is another well-known environmental cause of cancer that is often associated with melanoma, he said.

Viruses can integrate into human DNA, causing the expression of some genes, Magnuson said. The viral DNA can also interrupt certain parts of the human DNA, meaning the genes no longer work as intended.

Magnuson said the main causes of cancer all have something in common: they mutate the patient’s DNA.

“If anything happens to the DNA repair system — and it can if you have this bombardment of smoke — it turns on genes, but it also can cause irreparable damage to other genes that are important,” Magnuson said.

Treatment varies depending on the type of cancer the patient has, Roberts said.

There are also designer therapies meant to target cancer cells specifically. Some use molecules that inhibit oncogenes, Roberts said. Antibody treatments utilize highly-specific antibodies that target molecules on cancer cells and mark them for destruction.

Today, there are many people involved in cancer research. Based on many positive accomplishments over the past few decades, Magnuson said she thinks the future of the field is bright.