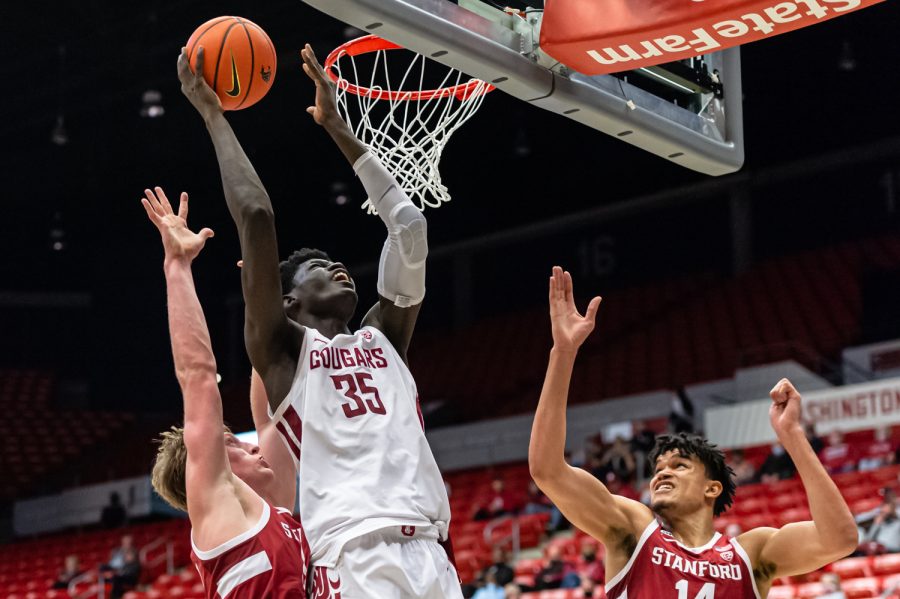 WSU forward Mouhamed Gueye (35) drives to the basket past Stanford forwards James Keefe (left) and Spencer Jones (right) during the second half of an NCAA college basketball game, Thursday, Jan. 13, in Beasley Coliseum.

WSU men’s basketball lost against Stanford with a rather bizarre start, 62-57.

According to Melissa Luck via Twitter, the Stanford team doctor was unsatisfied with the WSU COVID-19 protocol and demanded more tests after two players went into protocol. After over an hour of waiting and retesting the entire Cougars basketball team, the game was back on.

Stanford and the Cougs are both coming off wins. Stanford is coming off a major upset over No. 5 USC. This is Stanford’s second game after nearly a three-week break due to COVID-19 protocol. The game against USC was their first game off of the break.

Stanford stands tall as the fourth largest team in the nation, according to KenPom.

Three minutes after the tip-off, Stanford had drawn three fouls. Two of those fouls resulted in turnovers which allowed WSU to jump ahead 7-0.

Mouhamed Gueye had a solid first half with big offensive and defensive plays including a block and a couple of post moves to score. Guard Michael Flowers nailed a couple of big threes to help give the Cougs a nine-point lead at half.

Going into the half, the Cougs had a 52% field goal percentage compared to 38% from Stanford. WSU also recorded four steals in the first half, one more than Stanford. Each team was tied up at two blocks each. WSU fared well around the rim with 18 rebounds. Stanford put up 15 rebounds before half.

Coming into the second half, the Cougs drew two quick fouls. The fouls could not stop Gueye from dunking the ball and having a foul called. Gueye missed the free throw, but needless to say the dunk was one of the best Friel Court has seen in a very long time.

Within five minutes of the second half, Stanford started to close the gap from nine points to four. Gueye and Flowers continued to lead the Cougs as the only two Cougars in double-digits after the first 25 minutes of play.

The Cougs got to 42 points and tried hard to maintain the lead against Stanford, however that was not what the second half had in mind.

“Our second half tonight was the second worst half of the year,” WSU head coach Kyle Smith said.

The Cougs then went on a 12-minute scoring drought while Stanford took advantage and went on a 23-0 run, taking a 12-point lead. With five minutes left in the game and the Cougs down by 12, the deficit proved to be too big of a gap. WSU made the game interesting, bringing Stanford’s lead to just five points.

The Cougs have yet to lose a game by double-digits this season. The Cougs have lost all seven losses by a combined total of under 30 points.

“Second half we came out and couldn’t get a stop and then stopped making a basket,” Smith said. “It was tough to stem the tide and the momentum. At least we answered a little bit at the end of the game, trying to scrap our way back into the thing.”

“I thought we had two guys that played above average, played well,” Smith said. “You’re gonna have to do more than that to win in league. Mouhamed played really well.”

Flowers finished with 12 points, one rebound and one assist. Tyrell Roberts, who was originally scratched from the game, ended up playing to the surprise of broadcasters and fans. Roberts finished with 10 points, two rebounds and four assists.

Stanford had 17 turnovers. At least three of these turnovers came on shot-clock violations due to WSU’s solid perimeter defense. Stanford had 11 points off second chances while WSU had nine.

Fouls were again a problem for the Cougs in the second half. As a team, WSU had 11 personal fouls with Noah Williams and Roberts both at four fouls each.

The Cougs attempt to shake off this loss against California Berkeley at 1:00 p.m. Saturday in Beasley Coliseum. Cal is the second California school to come into town this week.