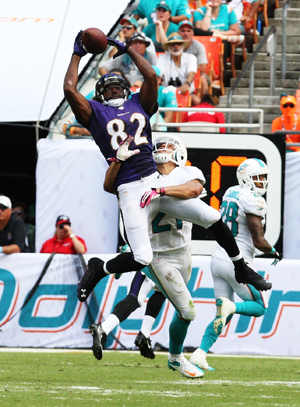 Shorts has flown under the radar so far this year, and it may surprise some to learn that his 61 targets currently leads the NFL. Jacksonville quarterbacks obviously leave a lot to be desired, but with such sheer volume there is always an opportunity for a big day. With Justin Blackmon returning in grand fashion last week, plays will only get easier for Shorts as defenses will likely key on Blackmon. Jacksonville this Sunday takes on Denver, who allowed more than 500 passing yards and four touchdowns to Dallas last week.

Fitz has underwhelmed his fantasy owners this season, who expected a bounce-back year from the veteran. That might still happen, but Fitz has struggled so far this season and battled injuries along the way. This week Arizona heads to San Francisco to take on a defense that has allowed the second fewest fantasy points to opposing wide-outs this year. Try to avoid the veteran this week.

Cutler is coming off a solid 22 point fantasy outing (ESPN standard scoring) against New Orleans last week and takes on the win-less New York Giants this Thursday at home. The G-Men have allowed the third-most fantasy points to opposing quarterbacks this season, meaning Cutler will likely be a top-10 quarterback this week. He’s currently available in 33.8 percent of ESPN fantasy leagues.

Russell will likely put up another efficient stat-line this week, but his fantasy numbers might not be there against a Titans defense that has allowed single-digit fantasy points to opposing quarterbacks in back-to-back games. The Titan rush defense, on the other hand, has surrendered over 100 rushing yards three times this season. With Seattle at home, expect to see a heavy dose of Marshawn Lynch, meaning Wilson’s statistical opportunities might be stunted by success on the ground.

The speedy Smith is coming off back-to-back 100-plus yard performances and now prepares to take on a Packers defense that has allowed six touchdowns to opposing wide receivers in four games this season. If Aaron Rodgers gets going early we could see a pass-heavy attack from Baltimore in an effort to keep up, meaning Smith might see plenty of targets in this one.