The Podium will hold all WSU home meets this season 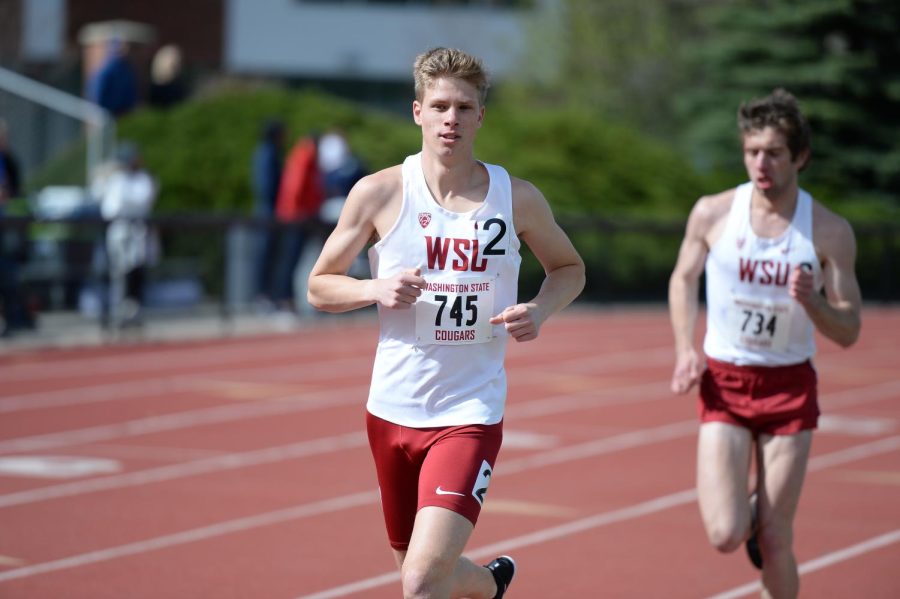 The Cougs had standout performances at the Cougar Classic Invitational and the UW Preview this last weekend.

WSU had five first-place finishes at the Cougar Classic. The Cougs also posted nine top-three finishes. Seven Cougars traveled to Seattle and competed in long-distance events at the UW Preview on Saturday.

To start off the weekend, the men’s track and field team came out ready to run and set new records, placing in the top-three overall.

“It was exciting to have our team back after the break to host our first-ever home meet at The Podium; where there was some awesome competition,” WSU head coach Wayne Phipps said.

Mitch Jacobson started off the weekend with WSU’s first event win in the men’s high jump. He jumped to a mark of 2.13 meters. This is currently the 16th best mark in the NCAA this season.

The Daily Evergreen’s very own Daylon Hicks placed fifth in the high jump with a mark of 2.00 meters.

Graduate students Sam Brixey and Nick Johnson went one and two in the 60-meter hurdles. This is the second meet that this duo has finished in the top two spots. Brixey finished first with a time of 7.83 seconds, just .01 second off his season-best set in December. This is the 11th fastest time in the United States in NCAA track. Johnson finished close behind Brixey with a time of 7.95 seconds.

Graduate student Jacob Englar continued to be a strong force in the pole vault event. He finished first overall with a mark of 5.10 meters.

“Mitch Jacobson, Zach Stallings, Sam Brixey, Nick Johnson and Jacob Englar were also very impressive and recorded nationally-ranked performances,” Phipps said. “A great restart to our season and we are excited about getting in some great work before our next meets in two weeks.”

Freshmen Evan Gonzalez and Ben Chappell had top-five finishes in their first meets wearing the crimson and gray. Gonzalez finished fifth in the 800-meter event with a time of 1:56.25. Chappell took fourth in the weight throw with a mark of 57.02 meters.

The WSU women had a great showing at the Cougar Invitational this last weekend. The women recorded nine top-five finishes overall.

To start off the meet, senior Emily Coombs took first overall in the pole vault. She recorded a mark of 3.90 meters, her current season-best. This was just the beginning for the Cougs.

Senior Anna Rodgers has been on a little bit of a winning streak. Rodgers held her undefeated title at The Podium in the long jump. She finished first overall with a mark of 5.73 meters. Following the long jump, WSU then competed in the high jump. Junior teammate Aislinn Overby tied for second with her season-best 1.70 meters in the high jump.

Graduate students Zach Stallings and Colton Johnsen traveled across the state and lit the tracks of UW on fire. Each athlete recorded a top-10 national time in their event at the Dempsey Indoor facility in Seattle.

Johnsen has continued his climb up the NCAA ladder and barely missed a WSU school record. Johnsen took second place in the mile with a time of 3:55.74. Johnsen was less than .01 second off of Bernard Lagat’s school record set in 1999. This mile time is the second-fastest time in NCAA Division 1 track.

“Colton Johnsen led the way running the second-fastest time in NCAA Division I and the number two time in the world in the mile,” Phipps said. “His mark also narrowly missed Bernard Lagat’s school record.”

Stallings recorded a top-10 national time in the 3000-meter event. He finished with a time of 8:00.10. This is the seventh-fastest time in the nation. Stalling placed second in the event and seems to be having a solid start to the season.

With WSU’s first major track and field weekend in the books, the Cougs now look ahead to the McCluskey Memorial Open on Saturday in Moscow, Idaho.