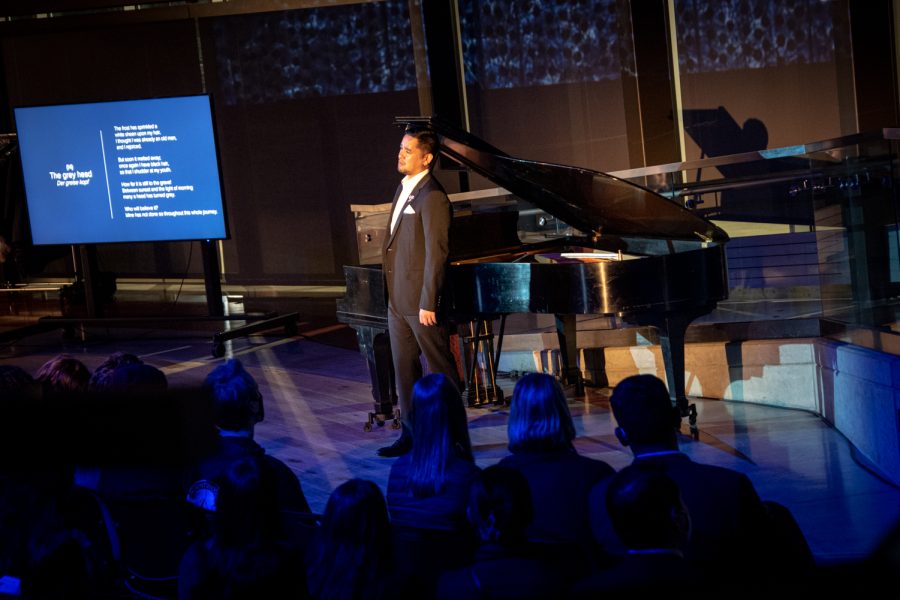 The concert is the first of its kind held in the Cultural Center and serves as an excellent example for similar programming in the space. While the performance specified limited attendance in consideration for COVID-19, almost every available seat was filled.

Other considerations for COVID-19 were taken into account in order to move the concert forward. Mask mandates were enforced and Hors d’oeuvres from SushiMan were canceled.

The artwork of Hara was projected against the backdrop of the concert to accompany the music through a partnership with the Jordan Schnitzer Museum of Art.

“This is the first time we have done anything like this on campus, It helps bring the space into its full expression. It is an opportunity to spotlight local talent and amplify Asian artists,” said Jason Abrams, assistant to the vice president of international programs.

Written when Schubert was very sick, the song cycle selected takes the audience through a winter journey. Despite the music being from an industry traditionally dominated by older white males, Agulay sought to express himself through the stories woven into the songs.

“Performing this doesn’t have to put me in a corner with one part of my identity,” Agulay said. “As artists, we get to create and influence live art. Ultimately we all have our story, and it’s the artists telling it through this amazing song cycle. When we do that, people can gather to listen to this beautiful song cycle.”

An essential component of the concert was created by local artist Hara. Her visual art was shown during the concert to accompany the singing and piano. Hara was able to collaborate with the other two performers on how the art would be used in the performance.

“Together, we went through all of Keiko Hara’s art to see which ones spoke for which song,” Agulay said. “It was really cool to see all of this high art coming together to complement each other.”

While the music is from the early 1800s, it is easy to enjoy with a sense of synergy that the performers brought to the stage. The experience did not appear distracting or too much for the eye to follow.  The piano accompaniment, the singing and the wonderful artwork all contributed to the execution of a great performance. The audience certainly noticed the success of all three artists in their craft.

“I had never been to anything like this before. I was asked if I wanted to come [to] see it by my friend who knew one of the artists,” senior psychology major George Gibson said. “I am not in the arts or anything, but I really enjoyed it. It’s not something you normally get in your day-to-day life.”

“Even though it kinda sounds cheesy, art is a great way to unite people,” Rodriguez said. “Anyone can enjoy it, and it’s really impressive to listen to and watch.”

The idea for the concert was originally proposed by the artists back in 2019. It required long hours by everyone involved in order to make the show a reality, Abrams said.

The hard work all seemed to pay off as the performers were greeted with a long-standing ovation after the concert was finished.

“Looking out into the audience and seeing the community coming together is overwhelming,” Agulay said. “We had this vision that was years in the making, and putting it all together is the emotional part.”

Abrams said they are working on reactivating a programming committee for the space and for future events.

“The performing arts are central to healing from trauma, and these last few years have been traumatic,” Abrams said. “This performance is the spark, and hopefully, it catches fire.”

While Abrams and the performers look ahead to future events, it is important to emphasize the success of the concert. Pullman residents and students came together to celebrate Asian performers, diversity and great music. The audience came away more than satisfied.