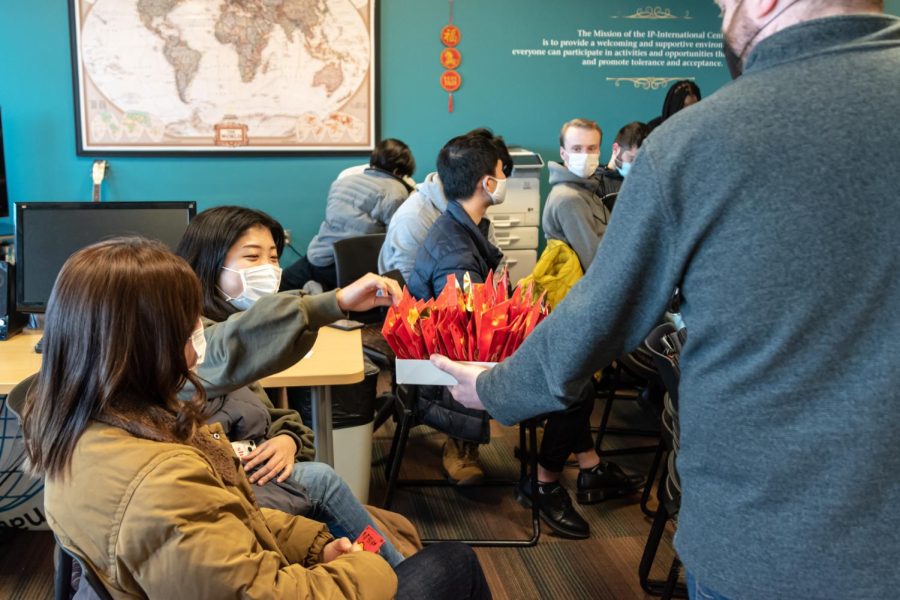 On Friday, the International Center hosted a mini Lunar New Year event. Perhaps mini is the wrong word — there were so many attendees that the IC needed to provide more chairs for their audience.

“This absolutely has been a fantastic success. We had a lot of sharing and conversations with students from a lot of different countries,” said Cody Tornow, assistant director of retention specialist for the IC. “I believe this is our largest turnout since post-COVID, so I’m really happy to see the International Center getting back on to where we had been previously before COVID.”

“The International Center is run by student interns, so they really decide the ebb and the flow of what we’re doing from year to year … so we get just an ever-evolving stream of different content that comes in,” Tornow said.

Lunar New Year is popular all around East and Southeastern Asia, according to an article by Anna Kim.

“Contrary to what many people outside Asia may think, Lunar New Year is not an exclusively Chinese holiday. True, it follows the Chinese Lunar calendar … but the holiday is celebrated across Asia, and each country has its own customs and traditions,”  Kim wrote.

For those unfamiliar with the holiday, it is based on the 1000-year-old legend of Nian. Nian was a terrifying monster who feasted on humans on New Year’s Day, according to the presentation given during the event. Due to its fear of the color red, loud noises and bright lights, people would put out red lanterns and light firecrackers to scare the beast away.

Along with the history of the Lunar New, the event included a Kahoot quiz to test the knowledge of the party-goers. The top three winners chose traditional Chinese envelopes out of many for a chance to win money. They were mostly red with gold embellishments and a cute design of a tiger on the front. These envelopes are popular in China, normally containing money for their recipients.

This event had a catch, though: anyone who wanted an envelope for themselves had to share what they normally like to do for Lunar New Year in their own country. This created a really interesting conversation about the differences between many Asian countries that celebrate this special occasion.

Students from outside the U.S. shared their traditional celebrations from their respective countries. During the conversation, a couple of students shared that in South Korea, it is common to use white envelopes instead of red, and for people to dress in their traditional Korean Hanbok to celebrate the new year.

Other events the IC has put on in the past include dessert tasting from around the world, cheese tasting, welcome barbeques and a wheat harvest field trip. They have also partnered with Ferdinand’s for ice cream days and many more events, Tornow said.

If you missed out on this Coffee Hour series, join the IC Friday Feb. 4 in the CUB L46 for an international letter-writing activity. The event has prepaid shipping to allow international students the opportunity to write to their loved ones back home at no extra cost.