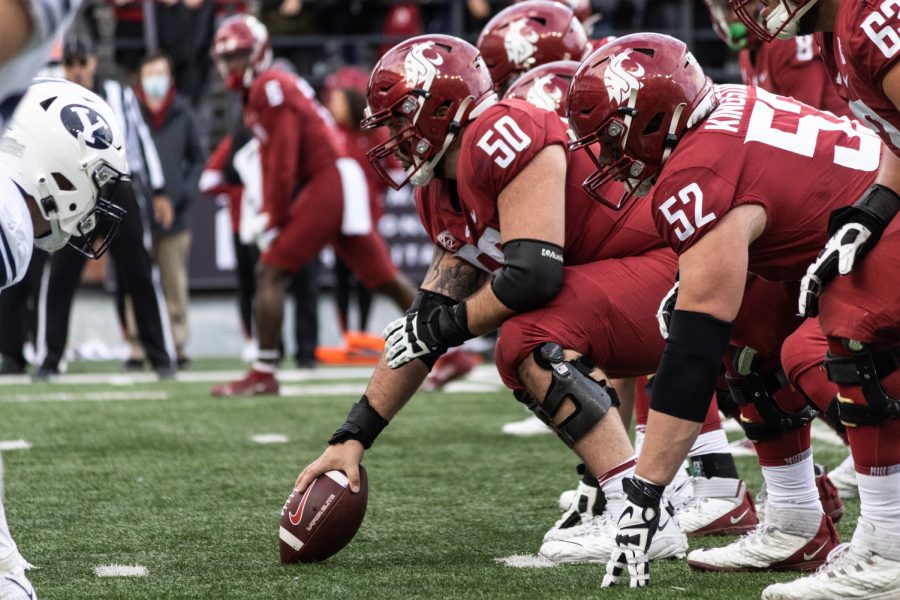 The WSU offensive line prepares to battle the BYU defensive line during a game on Oct. 23, 2021, at Martin Stadium.

These nine new members of the team will join other commits in spring for early football practice. Some of the recruits from the early signing period have already been on campus for the start of the semester, and have been getting acclimated with their new teammates.

One quarterback, four offensive linemen, two safeties, one running back and one wide receiver make up the nine new commits signed Wednesday.

This signing period for the Cougs was heavily influenced by Texas, with six of the commits having played high school football in the Lone Star state.

Although many recruits this year hail from Texas, head coach Jake Dickert still emphasized the states and regions that will be foundational for WSU football.

“Our foundational areas will be Washington, Oregon, California, Idaho and Hawaii,” Dickert said.

Dickert had loads to say about the new commits joining the team on National Signing Day.

“This is a rebuild of a roster,” Dickert said. “Since I’ve been here, in two years we’ve lost eight safeties.”

In Wednesday’s press conference, Dickert talked about three commits he feels will instantly impact the team and who could have major roles next season.

“First one is Jaylen Jenkins, because he’s kind of that change of pace [running back], he’s very versatile,” Dickert said. “And then the two big guys up front that I think are more physically ready than the other ones are Landon Roaten and Kendall Williams. Those guys will be thrown into a little bit of fire.”

Landon Roaten is a 6-foot-5-inch, 300 pound offensive tackle from Tomball, Texas. His brother, Luke Roaten, was also among the nine commits signed on Wednesday.

Dickert said the focus of the football program and Washington State Athletics culture is “family over flash.” Dickert wants the team to become a family and look out for one another, rather than caring about individual stat lines.

“These players have no ego, they came for the team,” Dickert said.

What drew the nine recruits to campus and intrigued them about the university and football program was the family feel that the team has. The football team wants to be able to provide for the players before and after they leave and wants to teach them life skills along the way, according to Dickert.

Dickert explained what type of players the new commits are, and what they bring to the team.

“We love guys that want to compete and want to play,” Dickert said.

Among the topics discussed in the press conference with Dickert was how the NIL rules have influenced their recruiting process, and what they are doing to compete with bigger schools and programs.

“I think we’re still building our assets and working to find ways to grow in that area,” Dickert said. “If we want to grow as a university and as a football program, that is now part of it.”

Dickert could not be more proud of the work the recruiting team has put in this offseason, and they can not wait for the season to start.

Some of the recruits will join football practices this spring and participate in the WSU team spring game later this semester.