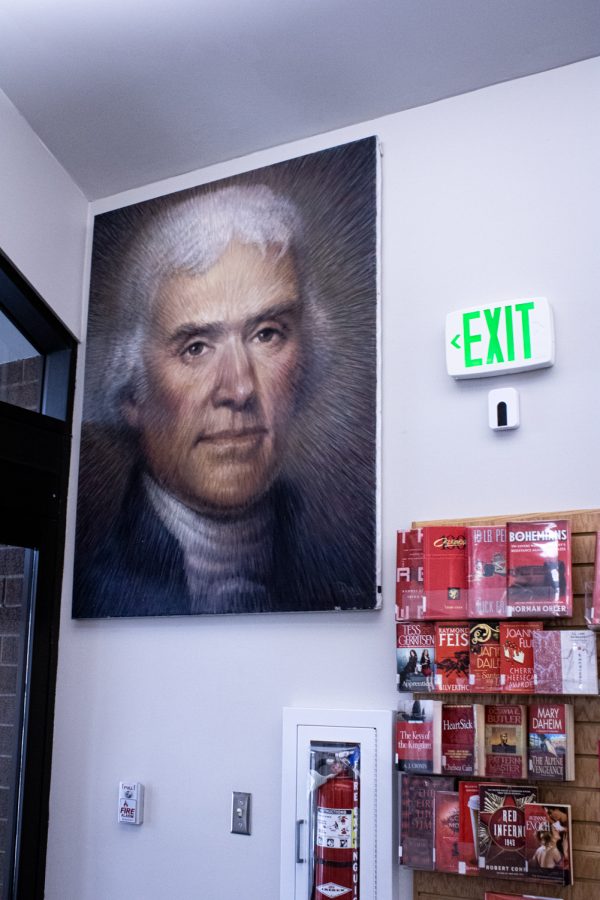 Public art cannot be removed due to public complaint, according to Pullman City Council policy.

After calls for its removal, the Thomas Jefferson portrait is still on display at Pullman’s Neill Public Library.

The Library Board of Trustees concluded that Library Director Joanna Bailey will ultimately decide what to do with the portrait, said Donna Potts, WSU English professor and board member. The board heard comments from the public at their Jan. 4 meeting, and then a follow-up meeting was held on Feb. 9 to discuss the painting more.

Dan Piel originally painted the portrait and gave the library the piece in the early 1980s for their art collection, said Pamela Awana Lee, art historian and former WSU professor. The library hung the Jefferson portrait during the pandemic. The painting is currently displayed in the north entrance and placed up high on the wall.

Lee explained some of the characteristics of the portrait, pointing out the golden light strokes coming from Jefferson’s face, representing idolization and memorialization.

Lee taught portraiture in the WSU Honors College and, as a person of color, said what she visualized when analyzing the portrait.

“He was an incredibly flawed man for any person of color — that he held people, slaves — as cattle, as property,” she said.

She sees the painting as a symbol of what old America represents, Lee said.

Due to Jefferson’s past of owning 600 slaves, many people wanted it removed or placed somewhere else the library, Potts said. Others demanded the portrait stay as a tribute to the third president, the principal author of the Declaration of Independence and someone who desired to eliminate institutional slavery.

Potts, Lee and Anthony Haynes, a fifth-grade social studies teacher at Jefferson Elementary who attended both meetings, all said they agreed that moving the portrait somewhere else in the library where it can be displayed with some educational background on Jefferson would be a good solution. All three discussed the importance of explaining someone like Jefferson so it does not give library patrons the wrong perception of why the portrait is there.

“I think we can’t erase our history of slavery and segregation. We need it to be talked about rather than glorifying the founders by putting up their paintings without explanation. We need to reckon with our past if we’re going to move forward,” Potts said.

During the debate of what to do with the portrait, people of color were sometimes afraid to speak about how the painting offended them, Potts said. It made her think critically about how the artwork affects minority groups in Pullman.

“I’m thinking about if it does make some people feel uncomfortable. There is no reason that we can’t put it in a place where they don’t have to look at it every time they walk out the door,” Potts said.

Lee also said different groups may have different perceptions of the painting. A Black woman might have a different perspective than a Native American or white person who walks into the library.

“I just really think it’s about just having compassion and empathy about how others feel. It’s not about censorship; it’s about telling the truth,” she said.

The library board has control of the art collection, and according to the 2014 Pullman City Council policy, “Art in Public Places,” an art piece cannot be removed due to the public’s opinion. Potts said that the library board is working on revising the policy for added clarity in the future.