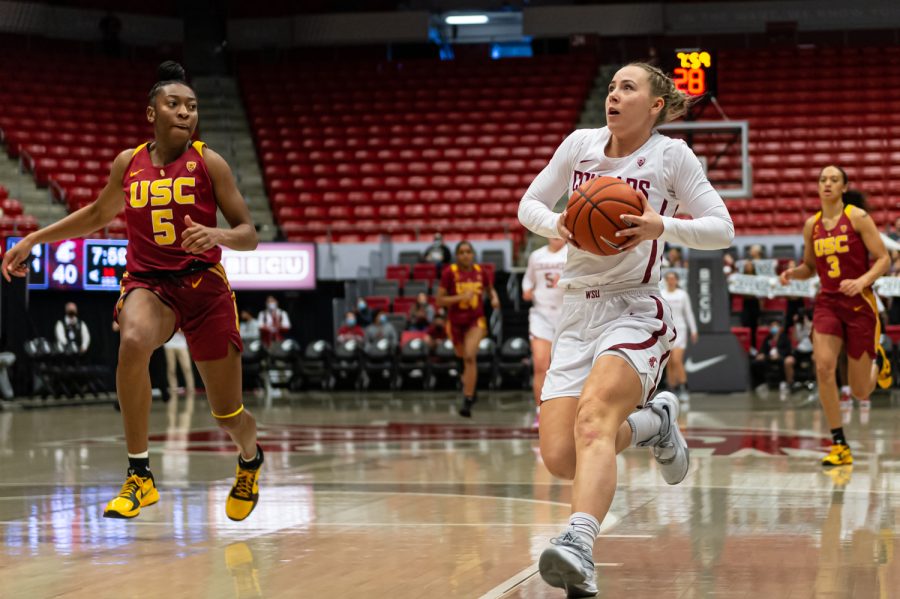 WSU will try to continue their two-game win streak against the Arizona State Sun Devils on Friday night.

The Cougs are currently 16-8 and rank fourth in the Pac-12 with an 8-5 record. The Cougars are coming off a weekend sweep, collecting wins against both Southern California schools. Both games against the UCLA Bruins and USC Trojans were extremely close.

Krystal Leger-Walker was the star of the show against the Bruins as she scored a season-high 22 points with a game-winning layup to help secure the win. Charlisse Leger-Walker scored 20 points in a nail-biting win against the Trojans. The sister duo is raising eyebrows in the Pac-12, with Charlisse currently ranking fourth in the conference for points scored with 16.3 points per game and Krystal ranking second in assists with 4.5 assists per game.

The Cougars showcase their improvement by being consistent in scoring behind the arc, rebounding and playing with heart.

“I’m unbelievably relieved and thrilled for our team,” WSU head coach Kamie Ethridge said after the win against UCLA. “I thought it was a hard-fought game that went back and forth. Both teams were trading momentum throughout the game. I was very concerned with how we started the fourth quarter. We got into a bit of a hole, but I thought it was huge for our team to come back and make big plays.”

The vision that Ethridge has for her team is coming to light — to be resilient and have everyone play a role on the court.

Johanna Teder, the junior from Estonia, provides an essential scoring role as she has been scoring in double-digits 10 times this season.

Bella Murekatete is showcasing her dominance close to the rim in every game. She has scored 10-plus points 13 times this season. She is also close to making WSU history, just two blocks shy of passing Shalie Dheensaw for seventh most blocks all-time. Murekatete has the chance to pass other WSU greats with one year of eligibility left.

Arizona State is 12-9 and ranks seventh in the Pac-12 with a 4-4 record. The Sun Devils got the win against their state rival, the Arizona Wildcats, on Friday, winning 81-77. Jade Loville led the Sun Devils in the win, scoring 27 points. Loville ranks third in the Pac-12 for points per game with 16.6 ppg. Taya Hanson and Mael Gilles helped Loville on offense, both scoring 19 points in the victory. The Sun Devils could not repeat Friday’s success in their second game against the Wildcats, losing 58-62 on Sunday.

This will be the 41st matchup between the two universities. In their last meeting, WSU lost a close game against the Sun Devils, 67-61. The Sun Devils have consistently been a difficult opponent for WSU, beating the Cougars in their last 11 meetings.

WSU looks to stop ASU’s win streak, aided by playing at home. So far this season, the Cougs are an impressive 10-2 when playing in Pullman.

Tipoff is set for 7 p.m. Friday in Beasley Coliseum. Fans at home can watch the action on the Pac-12 Network.