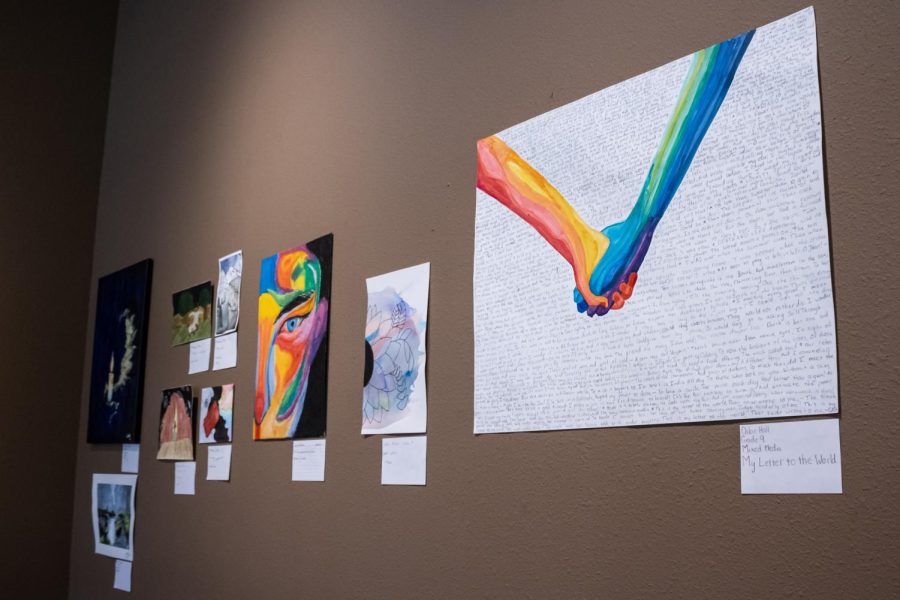 "My Letter to the World" by Chloe Hall, ninth grade, hangs on display at the Libey Gallery, Feb. 12.

The Colfax Library will be featuring artwork from local students for the rest of February.

The Jennings Elementary Art & STEAM Exhibit is now showing from Feb. 3-25 at the Libey Gallery, which is adjacent to the Colfax Library. The gallery is open on weekdays from 10 a.m. – 6 p.m. and on Saturdays from 1-5 p.m.

Sponsored by the Colfax Parent Teacher Organization, the exhibit features both art and science projects made by students from Jennings Elementary, Steptoe Elementary and Colfax Junior-Senior High.

The exhibit was organized by Amy Peterson Martinez, Colfax Library assistant and Colfax PTO treasurer. She said it originally began as a recurring art show held at Jennings Elementary, but this year it was combined with a science fair for the exhibit.

“I wanted to show what the students could do artistically and scientifically,” Peterson Martinez said. “It gave kids a challenge and made them think outside the box.”

Peterson Martinez said the usual art show could not be held at one of the schools due to the ongoing pandemic.

“Because of COVID, parents aren’t allowed to enter the elementary school,” Peterson Martinez said. “The exhibit gives the kids an opportunity to show their talents.”

The PTO did not set a specific theme to encourage creativity. Peterson Martinez said they opened the exhibit to all ages so students from Jennings Elementary, Steptoe Elementary and Colfax Junior-Senior High could all have the opportunity to participate.

“It gets kids excited when you tell them that their stuff is in the gallery, and that people can see their art,” she said. “It gives them an outlet for expression.”

If local schools are still closed off due to COVID-19 restrictions, there may be another Art and STEAM exhibit in the future. If not, the annual display will return to Jennings Elementary, Peterson Martinez said.

Visitors are encouraged to vote for their favorite Art and STEAM exhibits in-person by Feb. 25, and the winners will be announced on March 1.