90% of yield loss occurred in an experimental field 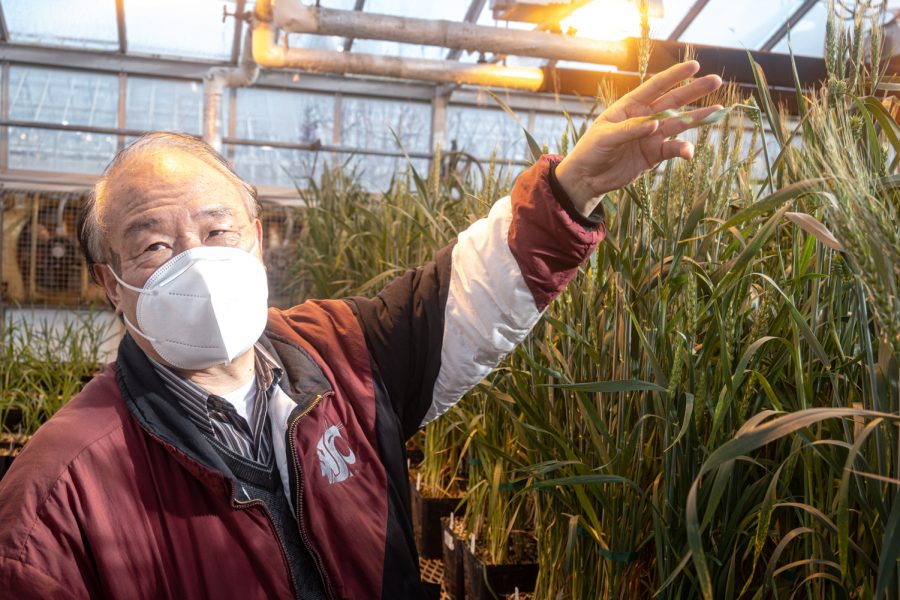 Xianming Chen, plant pathology doctor for the USDA Agricultural Research Service, showcases the wheat being used for the study.

Researchers from WSU and the United States Department of Agriculture (USDA) are working to combat stripe rust, a fungus that can devastate wheat crops and harvests in the Pacific Northwest.

The aim of this project is to study stripe rust and develop predictive models based on weather patterns to help growers prepare for potential infections, which will protect their crop, said Xianming Chen, plant pathology doctor  for the USDA Agricultural Research Service.

“We do all different kinds of research … trying to reduce the effect of stripe rust on wheat production and barley production,” Chen said.

While stripe rust is primarily a problem in the Pacific Northwest, it has become a growing issue in the rest of the U.S. since 2000, he said.

Wheat is a commodity product, meaning it is widely used. Because of this, there is a thinner margin for growers to profit from their harvest, or yield, said Timothy Murray, Doctor of plant pathology and WSU Department of Plant Pathology chair.

Stripe rust is prominent in the Pacific Northwest because of its propagation cycle and temperature range. The ideal temperature range for these spores — cells that fungi produce — to germinate is 40-60 degrees Fahrenheit, Murray said.

Stripe rust cannot grow without a host plant. Because growers in the area plant both winter wheat and spring wheat, a stripe rust infection one season can carry over to the next, Chen said.

Genetic resistance to stripe rust is key to limiting the damage. The department of plant pathology collaborates with the WSU Bread Lab, which breeds variants of wheat that contain resistant genes, Murray said.

Successful breeding is accomplished by selecting a variant with important traits — like resistance to stripe rust — and crossing it with a variant containing other important traits, such as high yield, he said.

Chen said there are over 300 races of stripe rust that contain different combinations of virulence factors — the pathogen’s tools for infection — to attack the host plant.

It is important to identify which race or combination of races are infecting a crop, which virulence factors to breed a crop in preparation for, which genes to prioritize and how to maintain a balance between resistance and profitability, Chen said.

Modern genetic technology, such as marking genes and tracking which ones are in offspring plants, has made breeding more efficient, Murray said.

Transgenics, when a clone of a gene from one plant is transferred to another plant, and genetic modification are other potential steps for researchers and growers in crop defense, he said.

The other method to limit stripe rust is the use of fungicide. Fungicide works by targeting certain fungus genes and disrupting their cells, Chen said.

“90% [of] yield loss occurred on a highly susceptible wheat variety without fungicide application in our experimental field near Pullman in 2011,” Chen said. “In that year, Washington wheat growers spent about $28 million on fungicides and application, which saved about 19 million bushels of wheat grain (about $136 million).”

Therefore, it is important to inform growers with the right data and predictions for stripe rust impact that year so they can ultimately make the decision of whether they will treat their fields with fungicide, he said.