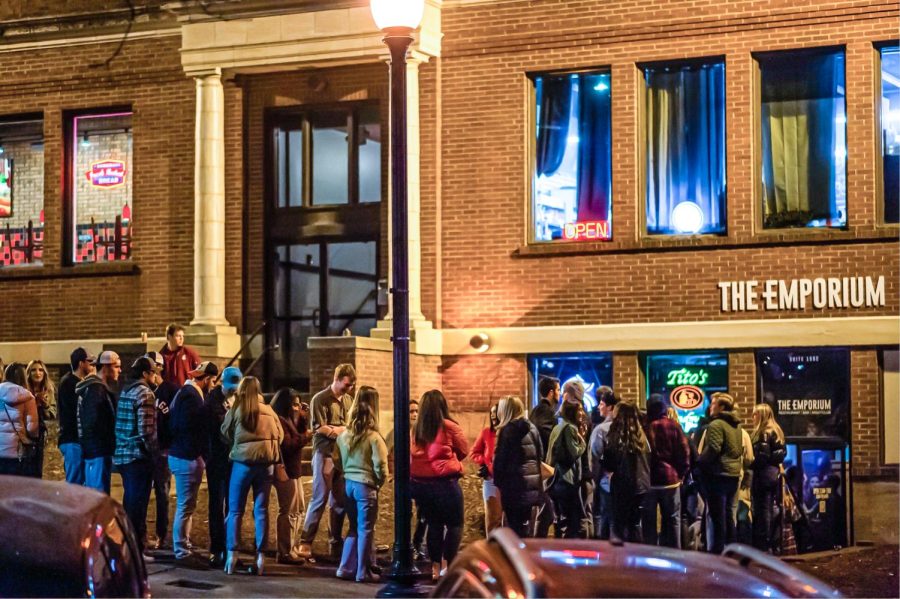 The Emporium is the newest of three businesses owned and operated by Cory and Blake Preston. The couple also owns Etsi Bravo and Crybaby Café.

For the past few weeks, residents on College Hill may have noticed a long line and pumping bass coming out of Adams Mall every weekend. The source of the commotion is Pullman’s newest nightclub, The Emporium.

Owners Cory and Blake Preston have run the ropes a few times when it comes to owning a business in Pullman. The Prestons opened Etsi Bravo in June 2015, Crybaby Café in August 2021 and now The Emporium in January of this year.

Blake is an alum of WSU with a hospitality business management degree, and Cory graduated from University of Idaho’s design program. Cory said the two met in 2012 while they were both bartending at a restaurant in Pullman, and quickly hit it off. In 2016 the couple was married at Etsi Bravo.

“We’ve always, you know, admired the bars on campus and never thought we’d have a shot of getting a place up there,” Cory said. “Because of the pandemic, the opportunity sort of presented itself, and it’s something that we had to jump on.”

The Emporium is the perfect three-in-one: A restaurant, bar and nightclub, Cory said. It is located in Adams Mall next door to its sibling, Crybaby Cafe.

Gabby Durante, junior advertising and broadcasting double-major, said she is no stranger to The Emporium. In the last month that the business has been open, she has been in and out every weekend.

“There’s a lot of people dancing on the dance floor; there are tables where people can eat or drink,” Durante said. “I’ve never been there when it’s not crowded. I feel like every time [that] I go, I’m always next to people.”

Durante’s go-to drink is the “Get it Girl,” a vodka, passion fruit and citrus mix. Like Durante, senior criminology major Alex Peterson said he is a “Get it Girl” kind of guy.

Peterson said the prices are cheaper than other bars, the drinks are stronger, and the location is ideal. While The Emporium stays pretty busy, there are three different bars inside, so the lines are never too long.

Blake said they have several events planned for the coming months.

This Thursday, The Emporium is presenting an “80s in Aspen” themed party. 80s music will be played by DJ Macfie, and 80s drink specials will be available. Blake said patrons should also be on the lookout for cash giveaways and a best costume prize.

“We’ll be doing events with Sanctuary, the yoga studio downtown; the details aren’t fully ironed out, but that’ll be for all ages,” Blake said. “That’s actually going to be at The Emporium with Sanctuary instructors, so it’ll be a barre class followed by brunch.”

Additionally, The Emporium will be hosting popular DJ, Troyboi, at 7 p.m. on March 3. Limited tickets are available through upandupfestival.com and it will be a 21 and up event, she said.

“We’re thrilled to be on the hill. It’s an exciting opportunity for us, and it’s been really neat [to have] the support we’ve gotten from the other businesses,” Cory said. “It’s really cool to be a part of this community up here, you know, we all kind of have the same goal of bringing nightlife to campus.”