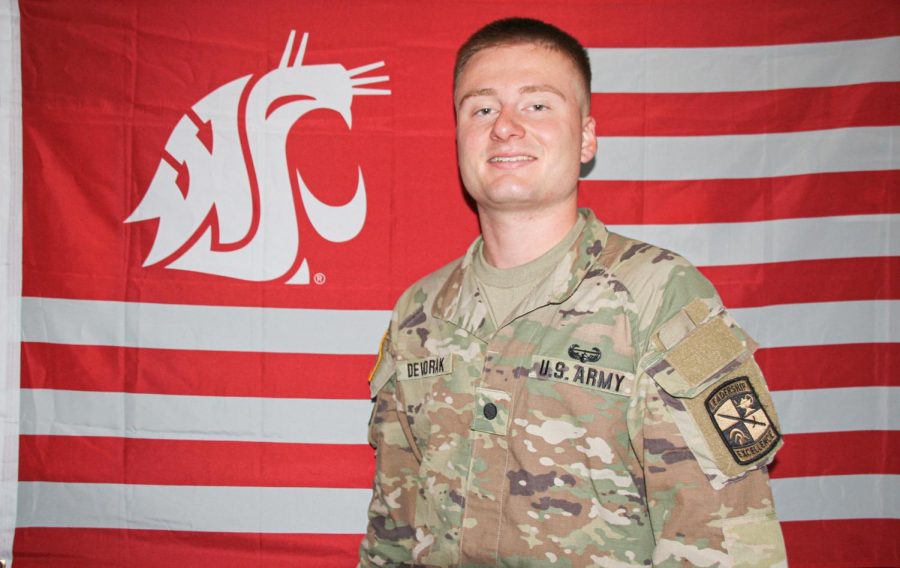 Resiliency, the ability to lead by example and the capability to develop others into leaders themselves are some of the things Devorak said he learned through his training and hopes to carry on through his time in the military.

Devorak, age 22, comes from Clarkston, Wash., and graduated from Asotin High School in 2018. He then made his way to WSU, where he decided to join the university’s Army ROTC program at the end of his sophomore year.

WSU’s Army ROTC program offers students a chance to advance their careers in a unique way post-graduation by becoming commissioned officers in the U.S. Army. This opportunity requires students to commit to an eight-year contract upon graduation. This can be broken up into various ways in terms of years of active duty and reserves, Devorak said.

Being an officer in the Army requires these ROTC cadets to step into a leadership role almost immediately after their graduation from their respective universities. The individuals they are leading are the tens of thousands of active-duty enlisted personnel currently under oath for the U.S. Army, he said.

“I’m not nervous, to be honest,” Devorak said. “It’s really all just excitement that I’m feeling. The other cadets and I feel as if our training has prepared us well.”

The training Devorak is referring to is the daily regiment all ROTC cadets must take on on top of their school schedules. In addition to the typical 5:50 a.m. workout formation on Mondays, Wednesdays and Fridays, ROTC cadets take extra credits that are required for their program. These required credits increase in number each academic year in the program. Devorak said it is not unusual for upperclassmen cadets to be taking around 17-18 academic credits a semester while in the program.

Lab classes that include field exercises are also thrown into the mix, with the cadets going through different training like tactical knowledge courses and leadership classes.

Devorak also holds leadership roles within the ROTC program. Being the president of the Cougar Battalion club, he said he helps make decisions on funding and other activities cadets do.

In addition to this, he also captains the school’s Ranger Challenge squad. The Ranger Challenge is a competition where schools send their “varsity team” to compete against other schools and test their skills in several events, including basic rifle marksmanship, land navigation and the Army Combat Fitness Test, he said.

The Ranger Challenge requires the competing cadets to undergo supplemental physical and technical training to be at their best performance to represent the Cougar Battalion proudly.

“It is kind of a big workload, but it has never felt like a job or work to me,” Devorak said. “It’s always been enjoyable; the other cadets and the cadre are an amazing group.”

Devorak’s desire to serve his country started before he joined the ROTC program, and even before he came to college. He said he thought about going the enlisted route after high school, but instead opted to continue his education at WSU because he saw an opportunity in the school’s Army ROTC program.

“One of the biggest reasons was to challenge myself,” Devorak said, “I have always done things to push me out of my comfort zone, this has definitely been something that has done that. Stepping into a leadership role has helped me progress a lot.”

ROTC Cadet Evan Smith spoke highly of Devorak’s work ethic, stating that he is an excellent example of what a leader should look like.

“Leading by example is something that doesn’t happen all the time,” Smith said. “People see how busy Devo’s (Devorak’s) schedule is, and they think ‘man, maybe I can do a little more.’”

The ability to lead by example is one of Devorak’s attributes that he has shown in the ROTC program, but not the only one. Resiliency and the capability to develop others into leaders themselves are also things he said he has learned through his training and hopes to carry on through his time in the military.

After graduation at WSU this spring, Devorak will move into infantry for a few years before going into the U.S. Army Corps of Engineers. He said he will look to combine his knowledge from his electrical engineering degree and his experience from the Army to open opportunities for his professional career.

“I don’t really know whether or not I want to make the Army a career or go into the civilian world for sure yet,” Devorak said. “I will wait to see how it goes, but one thing is for sure, I’m excited for what the future holds.”