Cougs finish season with most wins in NCAA era 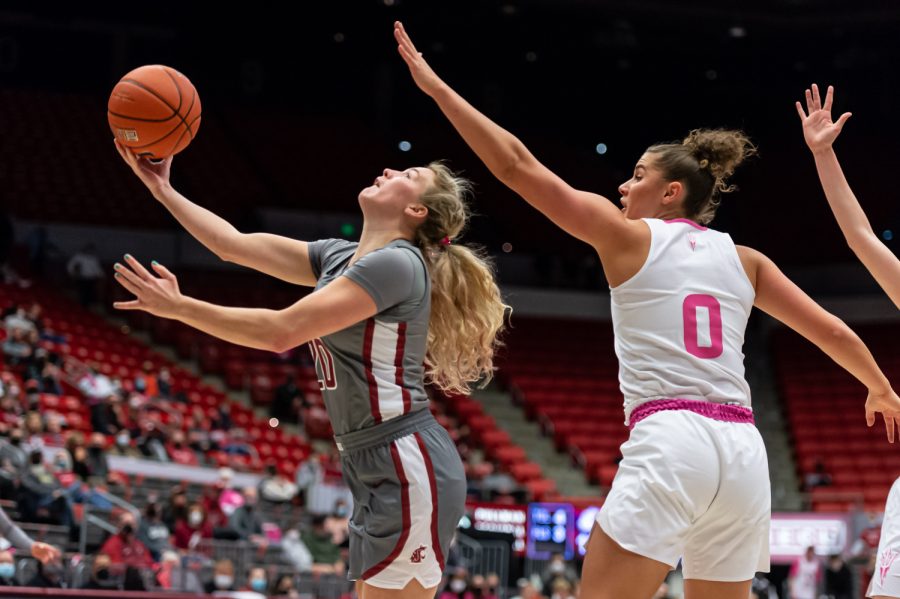 WSU guard Grace Sarver jumps for a layup during the first half of an NCAA college basketball game against Arizona State in Beasley Coliseum, Feb. 18.

The Cougs returned to the Palouse with a historic win, securing the No. 3 seed in the Pac-12 tournament.

The Cougs’ 73-67 win over the University of California Bears yesterday set the record for the most wins in a season in the NCAA era at 19 wins.

“It’s thrilling for our team to set these records,” WSU head coach Kamie Ethridge said. “I think so many people are just blown away by the success of this team and the toughness of this team.”

With this win, the Cougs earned a first-round bye in the Pac-12 tournament for the first time in program history. The Cougs finished the season tied with the No. 25 Oregon Ducks for second in the Pac-12. WSU heads to the tournament as the three seed, since the Ducks have the tiebreaker over the Cougs after they beat them 83-30 on Feb. 9.

“To have accomplished what we have this year in the regular season is just really a testament to our seniors, first, but also the entire program,” said Ethridge.

Four Cougs scored double-digits in their game against Cal. Bella Murekatete had 16 points. This was also her fifth time over the last six games with ten or more points. Murekatete had eight rebounds on the night as well.

Freshman Tara Wallack scored a career-high 14 points. Ula Motuga also scored 12 points on the night. This was Motuga’s sixth time getting 10 or more points in a game.

The Cougs shot 54.9% from the field as well as 66.7% from behind the arc. WSU shot 12 three-pointers and made an impressive eight of them.

“I’m proud that we won today,” Ethridge said. “I know it wasn’t perfect and I think our players felt some pressure and didn’t handle things so well.”

In the fourth quarter, the Cougs went on an 11-0 run to take a 21-point lead. The Cal Bears came back within four, but the Cougs responded with a two-pointer to win the game by six.

“Overall, what a great game,” Ethridge said. “What a great finish to the season and what a great road win against a really quality opponent. I’m thrilled with our seed [for the Pac-12 Tournament] and the fact that we get a bye in the first round.”

The Cougs dominated the boards with 26 rebounds to secure the win.

Cal player Jayda Curry had 19 points on the night and had three rebounds as well. Curry was Cal’s high-scorer, but it was not enough for the Bears to get the victory.

WSU now heads to Las Vegas, Nev. to play in the Pac-12 tournament. With their first round bye, the Cougs await the result of the Cal and Utah game which tips off at 8:30 p.m. on Wednesday.

You can watch the Cougs and the rest of the Pac-12 teams face-off on the Pac-12 Network.