Beasts of the Ice Age 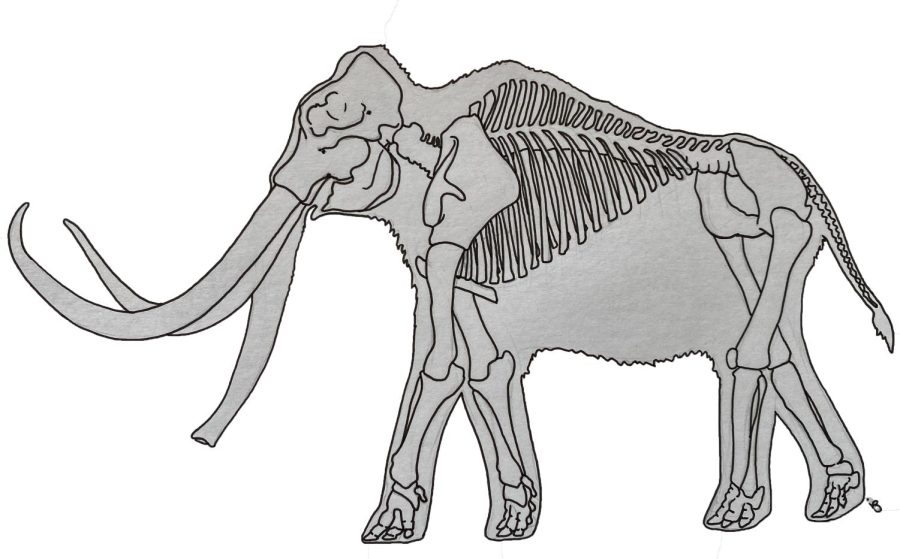 Events from the Ice Age shaped the terrain of eastern Washington.

Not so long ago, large creatures roamed the Pullman area. Formidable beasts journeyed through the plains of the Palouse during the last Ice Age.

The most recent Ice Age lasted from about 30,000 to 11,000 years ago, according to the National Park Service. The massive Cordilleran Ice Sheet covered most of northern Washington state during this last glacial period.

As it moved across the land, boulders encased in the 3,000-foot thick ice sheet chiseled into the land’s surface. This sculpted much of western Washington, especially Puget Sound, according to Ice Age Floods Institute.

Ice Age events also shaped the terrain of eastern Washington. Glacial Lake Missoula was bordered by a giant ice dam half a mile tall, according to Washington State Parks. The dam failed many times, setting a series of cataclysmic deluges in motion called the Missoula Floods.

The torrential waters scoured the Pacific Northwest, especially the Palouse. They etched swaths of deep trenches called the channeled scablands, which cover Pullman and nearly the entire southeast quarter of Washington, according to Washington State Parks.

The floods also carved the 377-foot deep canyon that is home to the cascading waters of Palouse Falls, according to IAFI. The falls is such an iconic feature of the Scablands and this area of the state that the state legislature designated it the Washington state waterfall in 2014. It is only a 90-minute drive from Pullman, perfect for a day trip.

Another geologic formation worth a visit is the Blue Lake Rhino Cave, one of the most unusual fossils in the world. The cave is a cast of the body of a male Diceratherium, an ancient rhinoceros. Lava flows covered the dead animal and preserved the shape of its body in basalt, according to Washington State Parks. The cave was partially opened by Ice Age floodwaters, allowing a lucky peek inside.

Discovered in 1935, the cave is still accessible to the public, only a few hours’ drive from Pullman in Coulee City, Washington. It’s the only place in the world where you can climb inside the tomb of an Ice Age rhino.

Also close to Pullman, at Tolo Lake in Idaho, ancient bison remains were unearthed, according to National Park Service. Steppe bison, wild Yukon horses and giant ground sloths also roamed the Palouse during the Ice Age, according to Yukon Beringia Interpretive Centre. The cow-sized, long-tailed sloths foraged on the trees and bushes of the Ice Age plains.

Before the giant floods, such plains covered the state and temperatures were much colder. Creatures that were adapted to these harsh conditions, like massive Columbian mammoths, thrived. Fossils of the species have been unearthed in Kennewick, according to the Coyote Canyon Mammoth Site.

The iconic Ice Age herbivores stood fourteen feet tall at the shoulder, weighed 10 tons and wielded 16-foot tusks, according to the National Park Service. The awe-inspiring Columbian mammoth was designated the Washington state fossil in 1998. Wooly mammoths have also been discovered in the state.

Gustafson’s discovery remains one of the most significant in WSU history. He also unearthed mammoth bones in central Washington, according to the Seattle Times. After nearly 40 years of teaching, Gustafson retired from WSU in 1998. He passed away in 2016, leaving a legacy of mammoth proportions. You can visit the Conner Museum on the ground floor of Abelson Hall to see a fossilized mammoth femur and mastodon teeth in person.

Not all creatures were gentle giants. Carnivores dominated the landscape. American lions, which were 25% bigger than today’s African lions, preyed on ancient bison and Yukon horses, according to the Yukon Beringia Interpretive Centre. Scimitar cats, whose long incisors are reminiscent of saber-toothed cats, were ambush predators.

Long-legged, gangly, giant short-faced bears were the largest carnivore to ever walk North America, according to the North American Bear Center. They were almost 50% larger than grizzly bears, standing six feet at the shoulders and weighing in at nearly a ton! Grey wolves also hunted the Ice Age plains and remain in eastern Washington today.