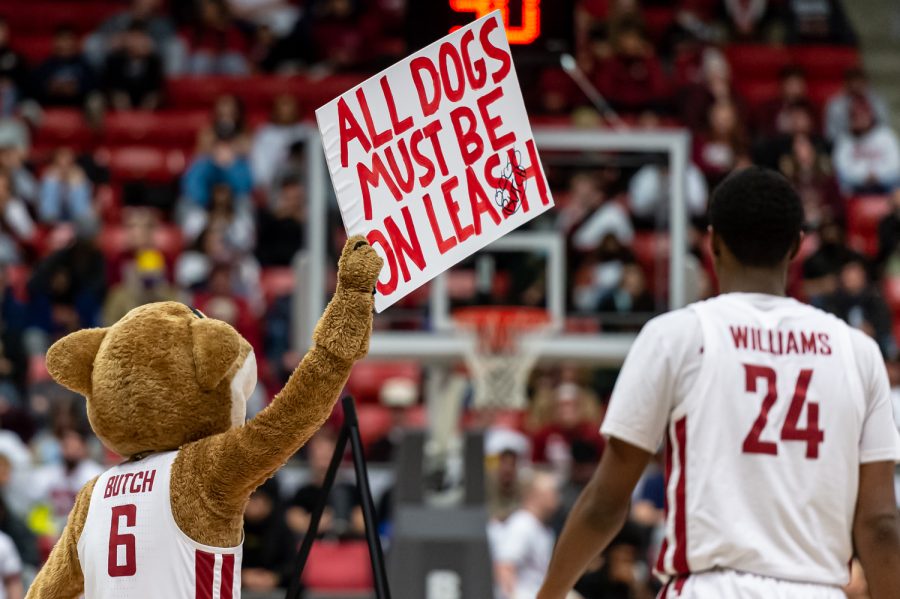 Butch T. Cougar shows his sign off to the crowd during the second half of an NCAA college basketball game against UW in Beasley Coliseum, Feb. 23.

With the 78-70 win over Washington in Beasley Coliseum last Wednesday, the Cougars have unofficially clinched the 2021-22 Boeing Apple Cup Series Trophy.

This is the third season of the athletic department competition, with Washington winning in 2018-19 and the 2019-20 season being canceled, the 2021-22 trophy is heading to the Palouse, where it will now stay.

The series is currently sitting with the Cougs up 235-140, according to the competition’s website. If Washington sweeps the final four scheduled meetings, the score will slide to 270-210 with WSU still commandingly in the lead.

The trophy only includes regular season match-ups, so any meetings in Pac-12 Tournament play will not affect these standings.

The programs are set to face off in a three-game baseball series and a meeting between the schools’ women’s tennis teams before the year is over.

The baseball series will take place March 18-20 in Seattle at Husky Ballpark. The series will be the second Pac-12 series of the year for the Cougars.

The tennis meet will take place on April 15 in Pullman on the WSU Outdoor Tennis Courts.