WSU men’s basketball gets back on winning track with win at Oregon State; host Beavers tonight 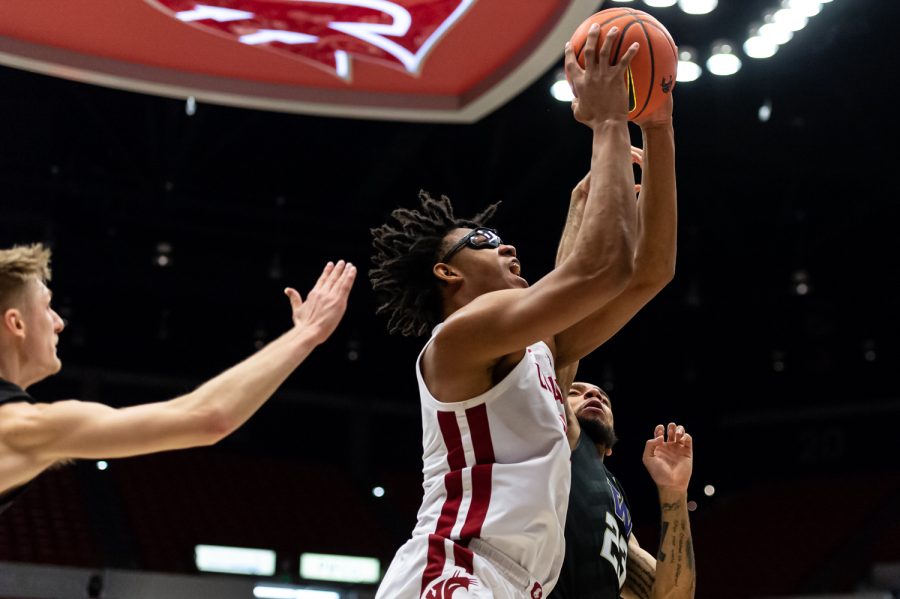 WSU center Dishon Jackson (middle) jumps for a layup during the second half of an NCAA college basketball game against UW in Beasley Coliseum, Feb. 23.

The Cougars were expected to easily secure a victory against the Beavers, who were sitting on 14 straight losses.

However, Oregon State would find themselves up 13 with about a minute to go in the first half. This lead would eventually be cut down to 11 at the half after a Mouhamed Gueye dunk to close out the opening period.

“Credit to Oregon State,” WSU head coach Kyle Smith said. “We said they were hard to guard, they’re hard to guard. [Dashawn] Davis really gave us a lot of fits.”

A consistent pattern in recent Cougar losses has been a lack of consistent offensive output. However, the Cougs had no issues on offense in this one. WSU went into the locker room shooting 48.3% from the field and 35.7% from three-point range.

The issue came on the other end of the court, as the Beavers shot 59.3% from the floor and 33.3% from three. WSU recorded just five points off of six forced turnovers in the first half, showing a failure to capitalize on chances. WSU was also outrebounded in the first half, something you do not expect to see often when Gueye, Efe Abogidi and Dishon Jackson are grabbing boards for the Crimson and Gray.

In the second half, the Cougs came storming back. With six and a half minutes to go in regulation, the Cougs grabbed their first lead since the halfway point of the first half.

It was a Michael Flowers three that put the Cougs in front. Up to that point in the half, both teams had taken 20 shots from the floor. WSU hit 14 (70%), while Oregon State hit just nine (45%). This was a theme of the second half for the Cougars, as they outshot the Beavers 65.5% to 51.9%. WSU also won the distance game in the second half, with 50% of their threes falling compared to a nearly impressive 42.9% from Oregon State.

After grabbing that lead, the Cougs would surrender it back to the Beavers on a three-pointer from Davis, who finished the game with 13 points on 6-13 shooting. Down the stretch, Roman Silva was also clutch for Oregon State, scoring a team-best 21 points.

WSU did not see the lead again in regulation. Tyrell Roberts had a chance to put WSU out front with 15 seconds to go at the free throw line. Down by one, Roberts made the first shot, but missed his second attempt. Oregon State then had a chance to retake the lead. Davis missed a three with one second left before WSU’s TJ Bamba fired a full-court buzzer-beater attempt that hit the rim.

The first shot of overtime was a Gueye layup that put WSU up 86-84. The Cougs would never relinquish that lead, outscoring the Beavers 19-13 in the extra period. The Cougs hit five of seven shots from the field and eight of nine from the free throw line.

Flowers was crucial for the Cougars once again, putting on a scoring clinic with 27 points on 10-18 shooting, including 6-10 from three. Flowers has now hit 20 points in eight contests this season, including 30 against the Washington Huskies in the prior game. He has also hit double-digit points in 21 of his 29 appearances this season.

“It wasn’t just me, though,” Flowers said of his performance. “It was a group effort. We came together in the locker room at halftime and just looked at each other and said ‘We can’t point fingers.’”

Another highlight for the Cougs was Gueye, who was second on the team in points. Gueye went a perfect 7-7 from the field and 5-6 from the charity stripe for 19 points. He also tallied five rebounds, matching Flowers’ production. Jackson led the team in that category with six boards.

“Those were some big free throws that Mo made,” Flowers said. “That’s freshman of the year in the Pac-12 in my opinion.”

Now, WSU looks forward to another meeting with the Beavers tonight, this time in Pullman. Despite the close game in Corvallis, Ore., WSU has a 94.6% chance to win the game, according to ESPN’s Basketball Power Index. This is up from the previous meeting that gave WSU roughly an 88% chance to win.

This will once again be a nationally broadcast game with WSU’s home leg of the series televised on FS1. Tipoff is set for 8 p.m. tonight in the penultimate game of the regular season.