Deafness not a disability but a culture; ASL a true language 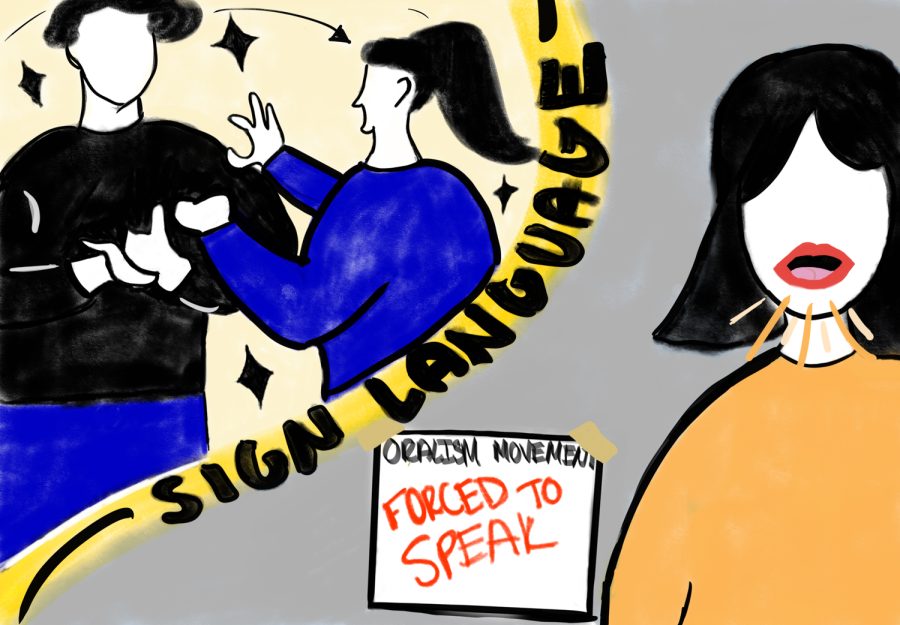 When I was in kindergarten, my teacher taught American Sign Language to the class, and I thought it was the coolest thing in the world. My playmates and I would sign to each other, and I remember feeling like a part of a remarkable community.

Once I entered primary school in a different district, though, I stopped practicing and quickly lost fluency because none of my friends understood sign language. Nevertheless, I always wanted to relearn ASL as an adult, but I could never enroll in a course due to my hectic schedule.

However, this winter break, I was finally given the opportunity to take a three-week ASL course with Melissa Ratsch, teaching associate professor for the Department of Speech & Hearing Sciences.

Under her instruction, I learned numerous signs, facial expressions, grammar rules and sentence syntax – all the normal aspects of any language course. But I also learned about the history of the Deaf culture and community, and I was shocked to discover the events that have transpired in the Deaf community.

And in the late 1800s, Alexander Graham Bell popularized oralism, declaring that oral education was superior to manual education (i.e., sign language), and forcefully promoted preventative measures to decrease the transmission of hereditary deafness. During this time, deafness was seen as a disability that needed a “cure” rather than the more modern-day view of deafness as a culture.

These preventative measures included removing sign language from Deaf schools, replacing Deaf teachers with hearing ones, integrating hearing students with the Deaf and decreasing intermarriage among Deaf people to create a more homogenous society, according to an essay by Brain Greenwald, professor at Gallaudet University.

Bell’s endorsement of oralism, coupled with his followers’ support, convinced the leaders at the Second International Congress on the Education of the Deaf (also known as the Milan Conference) to sign a law abolishing ASL in the U.S., which marked the beginning of the Dark Age of Deaf Education.

“[The oralism movement] was dumb. It forced people to speak a language that they couldn’t speak,” said Mia Murphy, sophomore business marketing major whose first language is ASL. “People think that just because we can read lips, we can speak their language.”

Likewise, Ratsch did not support the oralism movement.

“I believe that all Deaf people should have access and learn their first language, which is a visual language,” Ratsch said. “If they want to learn speech along with [ASL], great! Learning a visual language first helps make it easier to learn a second language, such as English.”

Due to society’s view on deafness, it did not matter that Bell had a Deaf mother, wife and investor who could show him the benefits of manualism. He and other hearing individuals continued to endorse the oralism movement, almost eradicating an entire culture in the process.

The only reason that I, and many other individuals, can study ASL in school today is because of William Stokoe, a long-term linguistics professor at Gallaudet University.

He devised a descriptive system that demonstrated to other linguists that ASL is a true language and persuaded Gallaudet University to retain sign language, which aided in its survival through the Dark Age of Deaf Education.