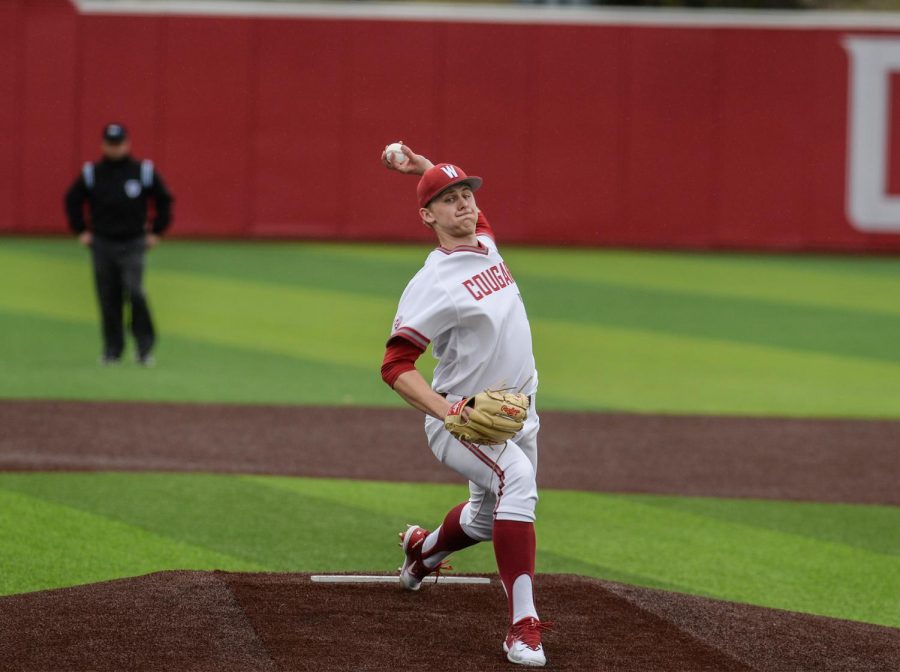 Then-sophomore left-handed pitcher A.J. Block throws a pitch during the game against Saint Mary’s on March 8, 2018 at Bailey-Brayton Field.

WSU baseball is set for a three-game weekend in Frisco, Texas, for the Frisco College Baseball Classic starting Friday against the Texas A&M Aggies.

Overall, the Cougs are 4-3 against Texas A&M, the most recent game to date was a three-game series in 2010, when the Cougs lost 2-3 games.

The Cougs are coming off a 9-8 victory against the Tarleton State Texan Raiders Wednesday, where four runs in the third and ninth innings helped the Cougs comeback and earn their sixth win on the season.

So far in 2022, the Aggies are 6-2. They started off the season sweeping Fordham in a three-game series, scoring 23 runs and giving up only eight runs. They then beat Lamar in a one game affair, 9-3.

The Aggies ran into some trouble against Penn, losing two out of three. The first game was a 1-2 loss, the next game the Aggies won 5-0 and they followed up their win by losing 5-8. The Aggies’ most recent game was Tuesday against Houston Baptist University, a game in which the Aggies won 3-2.

The Cougs move on from the Aggies to face the Wichita State Shockers Saturday. Overall, Wichita State is 2-1 against the Cougs. The only time these two teams competed against each other was in 2010 for a three-game series where the Shockers won 5-3, lost 2-3 and ended the series winning 6-4.

In 2022, the Shockers are 2-7 with an away record of 0-7 and a neutral record of 2-0. Wichita State started their 2022 campaign by losing three straight against Louisiana Tech, scoring just 12 runs and giving up 21 runs. The Shockers lost one game to the Oklahoma Sooners 6-2 and followed that up with a 9-2 loss against Texas State.

Wichita State competed in the Kleberg Bank College Classic, where they won two of their three games. The first game of the classic was a 5-3 loss against Texas A&M Corpus Christi. They defeated Pepperdine 5-2 and ended the classic with an 8-7 victory over the Iowa Hawkeyes. The Shockers’ most recent game was Tuesday, which was an 11-6 loss against Oral Roberts.

WSU will end the three-game classic Sunday with a game against the Iowa Hawkeyes. On the season, Iowa is 5-3, with a 1-1 home record and a 4-2 neutral record.

Iowa started the season with a 12-2 victory against Air Force, beat Ball State 11-1 and defeated Bucknell 3-0. Iowa competed in the Kleberg Bank College Classic as well, losing two of three in the classic. Their only win of the classic was a 3-1 win over Pepperdine, they lost in extra innings to Texas A&M Corpus Christi and lost their final game of the classic 7-8 to the Shockers. After the classic, the team lost 3-1 to Loras College. The Hawkeyes defeated Cornell 8-0 on Wednesday for their final game leading up to the Frisco Classic.

After the classic, the Cougs head home for their first home stand of the year — a three-game series against Oregon State.