Cougs hold on for tight win 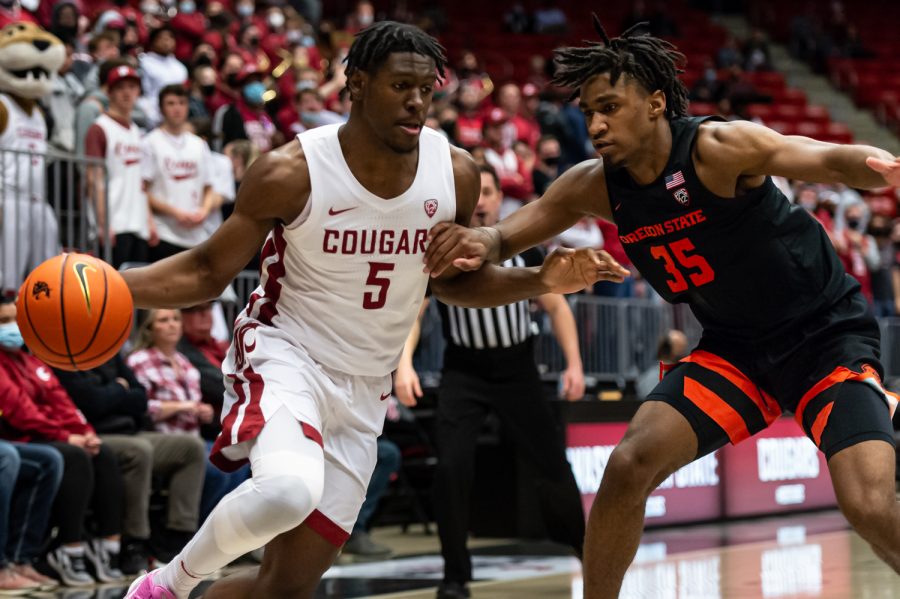 “We’re just growing up really,” TJ Bamba said about the team winning these close games. “I think the USC game did it for us. We were sick of it.”

The win makes it two straight victories and three wins in the last four games for WSU. It also means a season sweep over the Beavers for the first time since 2012.

Oregon State was missing several players, the biggest loss being Dashawn Davis, who dropped 13 points and 11 assists just three days prior in Corvallis, Ore. Davis was dealing with an undisclosed illness that caused his absence.

WSU started their home leg of the series red hot, going up 7-0 in the first 80 seconds of the game. However, Oregon State battled back, as they would several times during this contest. There were just four lead changes. Additionally, the game was tied five times.

The Cougs had the lead for the majority of the contest, leading for nearly 26 and a half minutes. That is a misleading stat in this case, however, as the Cougs never seemed to be able to pull away. Every time WSU started to stretch their lead and pull away a little, the weakened Beavers team seemed to go on a run to make it tight again.

“They were physical with us,” WSU head coach Kyle Smith said. “We didn’t really exploit that. We should have had them in foul trouble.”

Bamba led the Cougars in scoring with 16 points. Bamba also tied for the team lead with eight rebounds. Michael Flowers and Tyrell Roberts also joined the double-digit scoring club with 14 and 10 points, respectively.

“He’s a process guy,” Smith said about Bamba’s night. “He’s a guy you want to root for.”

Defensively, the Cougs racked up an incredible nine blocks. Big man Efe Abogidi came off the bench and once again reminded everyone that he is an NBA talent, grabbing eight rebounds and recording five blocks.

On one specific series, Abogidi adjusted in the air for an acrobatic alley oop layup. The big man fell into the front row of photographers, got up, ran down court and swatted a shot on the other end. It was one of those sequences that you see from Abogidi and have to pick your jaw up off the floor.

Abogidi also shot 2-3 from the floor, including hitting his lone three-point attempt to stifle an Oregon State rally, and made all four of his free throws. If there is one player in this game who could challenge Bamba for player of the game, it would certainly be Abogidi.

Now, the Cougs look forward to senior night and, potentially, the most eyes any of their games will have this season. WSU hosts Oregon (18-12, 11-8) at 1 p.m. Saturday in Beasley. The game will be broadcasted on CBS.

Oregon won the previous meeting 62-59 in Eugene, Ore. a little more than two weeks ago. WSU won the battle on the boards in that one, which will be a major key if they want to make this second game interesting and potentially pull off the upset. WSU will have the advantage of Dishon Jackson returning to the lineup, solidifying the frontcourt that was beginning to get a little shallow in his absence.

The last time WSU got both the Oregon teams at home in a season was in 2019-20, when the Cougars swept the pair of Pac-12 foes. The Cougs will be looking for consecutive home wins against Oregon for the first time since their 2007-08 and 2009-09 seasons.

The game is set to be the final home game of four Cougar players’ careers. Fifth-year Tony Miller, as well as seniors Will Burghardt and Matt DeWolf may see playing time because of it being their senior night. The fourth senior is Flowers, who will certainly see playing time as a consistent starter and offensive key this season.