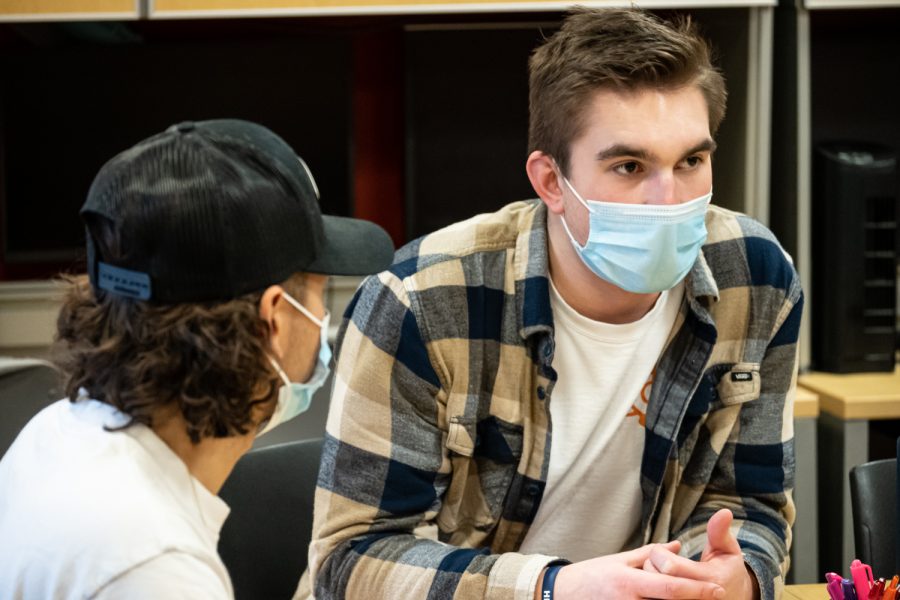 ASWSU President Brian Patrick and ASWSU Vice President Alexander Pan reflect on their time in office on March 3 in the Compton Union Building.

A meeting at a football game would eventually lead to a friendship and political partnership between ASWSU President Brian Patrick and Vice President Alexander Pan.

“I’ve started to look back on it, and it’s crazy to see how that one little conversation has made me the person I am today,” Patrick said.

The two met while Patrick was a senior in high school. As a WSU freshman, he joined the same fraternity as Pan. Pan took him under his wing and encouraged Patrick to run for office, he said.

“Going into the whole election process, as everyone should, we dreamed big. Once you actually step into the position, you realize that you can’t always do everything you want to,” Pan said.

Their work builds on the work from predecessors and what they worked on, Pan said.

When the team was first running for office, their main focuses were on mental health, student safety and increasing transparency between the student population and student government.

During their term, they have connected with Cougar Health Services to advertise their Counseling and Psychological Services program, Pan said.

Patrick said they have also done walks and drives around the Pullman campus, especially the College Hill area, with the College Hill Association and WSU Police. These events are to raise awareness about sites where students do not feel safe, so that safety measures can be taken – whether that be lighting or crosswalks.

The two have also met with directors of community affairs and presented some options on College Hill for light safety improvements, which they hope will be implemented within a year or two.

“We don’t always have enough funding to do those projects, but we’re working on finding who we can partner with to get safety features added for students,” Patrick said.

On the issue of transparency, Pan said that they have been trying to get students to go to their auxiliaries to get input.

They have also reintroduced meetings where all the presidents from the auxiliaries within ASWSU come together. They hope that these meetings will increase transparency in the future, so students know exactly what is happening within ASWSU, as well as WSU administration, Pan said.

The two made an effort to get together and check in on bills to collaborate on. Both Patrick and Pan gave testimony in support of the anti-hazing Sam’s Bill to the Washington legislature, which passed last week.

A large part of the job is communicating between multiple departments and parties on campus, Patrick said. Building those relationships with all of the departments is hard to do, but necessary to increase transparency.

“You don’t really understand until you’re in it, but there are many people within WSU, and they all have specific jobs,” Pan said. “Connecting with the right people to find answers could be a pretty big challenge.”

ASWSU is unique because the president and vice president roles are really managing the team and setting them up for success, Pan said.

“We’re connecting our directors with people to get what they want done, so a lot of them have been able to find easier access to projects that they want to accomplish, which I’ve heard previously wasn’t as easy,” Patrick said.

The two have projects they work on, but the biggest thing is supporting and empowering all of the directors and deputy directors, Pan said.

“Our directors have put on awesome projects and programs for the WSU community, and it’s been really cool to go to those events and see how big of a success it was,” Pan said.

As they transition out of office, Patrick said he hopes they leave that network behind as a template for future ASWSU leaders.

There are also some issues that the two wanted to spend more time on and hope that the next ASWSU will continue to work on them.

For students, there is an overwhelming amount of resources, Patrick said. Having one website where people can easily access almost anything is something he wishes they could have done.

Another issue is tuition. A lot of students are very curious about where their tuition goes, but it is very hard to break down where each and every single dollar is allocated, Patrick said.

Elizabeth Chilton, provost and executive vice president, is working on creating a more accessible tuition breakdown, which will be helpful, especially with continuing tuition increases, Pan said. They hope to see action on that within the next year or two.

WSU government takes a while to make changes on campus, Pan said. Throughout their term, the team would bring up an issue, only to find that the university had been working on it, sometimes for as long as two years.

“We’re here to advocate for students and bring issues that WSU administration knows they have to work on, but we quickly understood that they’re constantly working. It just takes a time to implement,” Pan said.

This is also complicated by the various needs of so many different groups.

“I’ve never before advocated for an entire undergraduate student body and that comes with a lot of challenges where, you know, we’ve done things that maybe weren’t correct … but, it’s learning from what we’ve done incorrectly and moving along from there,” Patrick said.

Going into their roles, there were not a lot of transition documents to prepare the two for their positions. There is no guidebook, no “ASWSU for Dummies,” Patrick said.

“It was really like learning on the fly, but luckily, we did have a summer to figure things out,” Pan said.

Even having worked two years previously as ASWSU’s director of community affairs, Pan said he realized there was so much he did not know coming into the vice president position.

“Something I would like to implement is connecting with the past ASWSU president and vice presidents,” Pan said. “I’d like to have an open forum for asking questions—what’s worked, what’s not worked—that knowledge that is passed down from administration to administration helps a lot.”

Patrick and Pan have about a month and a half with the new president and vice after they are elected. They plan to act as mentors: bringing them to every meeting and passing on the information they know. They want to make themselves available, even in the summer, Patrick said.

Holding these positions has given the two a unique perspective on the community.

Patrick said he has always loved WSU, but before getting into this role, he did not appreciate how complex the university is. The two get to see things from such a different level, Patrick said.

“We get a little bit of an insight on how WSU works, and I really feel like I have a greater connection to the university,” Pan said. “Once I leave WSU, I think I’ll love this place forever.”