Senior Will Burghardt steals the show with late three 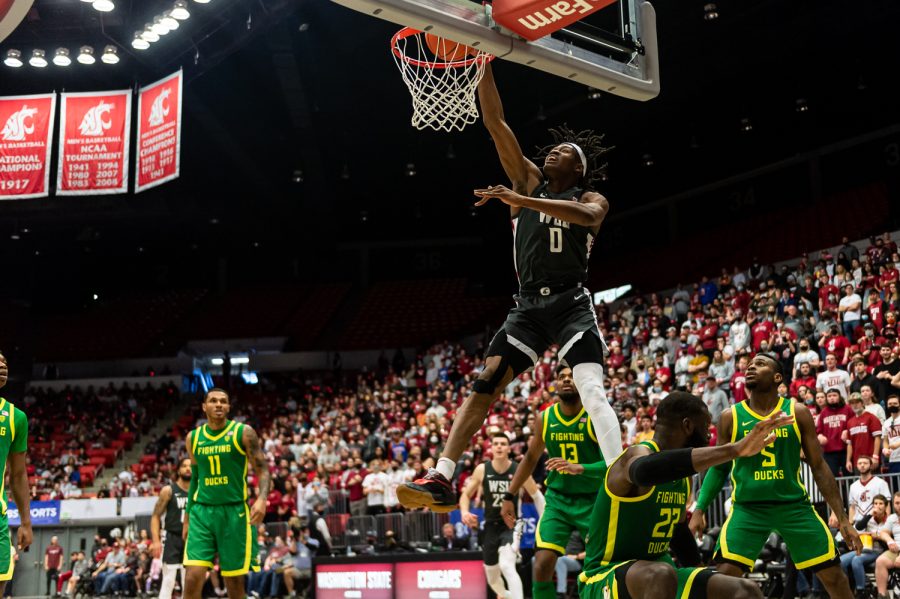 WSU forward Efe Abogidi (0) dunks the ball during the first half of an NCAA college basketball game against Oregon in Beasley Coliseum, March 5.

“Our guys really like each other,” WSU head coach Kyle Smith said. “These seniors jumped into the program this year and it’s been a shock to me how much of an impact they’ve had on just helping us grow up. We’ve had some rough patches and they’ve stayed together and did a great job.”

The victory marked the biggest win for WSU men’s basketball over Oregon since 2009.

The Cougs can thank their newfound offensive explosiveness for the win, shooting 50% from the field and 47% from three. WSU hit 16 threes, which marks the highest total ever for the program in a conference match-up and the most in any contest since hitting 16 against Saint Joseph’s in 2017.

“If this [the season] was going to June, I think we’re in the National Championship,” Smith said.

Everyone got in on the action from three including Tyrell Roberts going 5-7, while Noah Williams and Andrej Jakimovski went 3-5. However, the biggest three of the night came in garbage time with the Cougs up 22 late in the second half.

With 59 seconds to go in the game, senior Will Burghardt hit his first and only shot as a Coug, drilling a contested three and causing a burst of cheers among the fans in Beasley. The student section had been chanting “We want Burghardt” prior to his entrance to the game.

“This is an unforgettable moment,” Burghardt said. “I’m not gonna lie, I was pretty nervous when I got in there and then as soon as that three went in, I lost all train of thought. I was just enjoying the moment.”

Oregon never really had this one under control, falling behind by seven in the first five minutes. By the half, WSU had grown their lead to 14.

In the second half, the Cougs continued to grow the lead, spending most of the period up 20 or more points. The Cougs jumped up to a 25-point lead on the Burghardt three for their biggest lead of the game before Oregon scored five of their own to get the final margin back to 20.

“Trusting the process, continuing working, keeping the faith in God and knowing that I can shoot,” Williams said. “I’m going to continue to shoot. Shooters shoot, regardless of if they’re missing or not.”

In addition to his 10 points, Flowers recorded two rebounds and six assists in his final game at Beasley Coliseum. Matt DeWolf got the start in his final home game as a Cougar, grabbing one steal in six minutes of action.

“I just wanted to leave a legacy to help build the culture,” Flowers said. “Big things can happen here and that’s what we wanted to start, be a part of that, look forward to the future and keep building.”

The Cougs have won the last four meetings with California, including a season sweep of the Golden Bears this season. The last time the two met on a neutral court was in the 2014-15 Pac-12 Tournament, where California won 84-59.

“You have eight guys and they’re interchangeable,” Smith said of the team’s plan for the Pac-12 Tournament. “Kind of take what the defense is giving you. That will be our design.”

A win over the Golden Bears would advance WSU to a game with No. 2 seed UCLA at 6 p.m. Thursday.