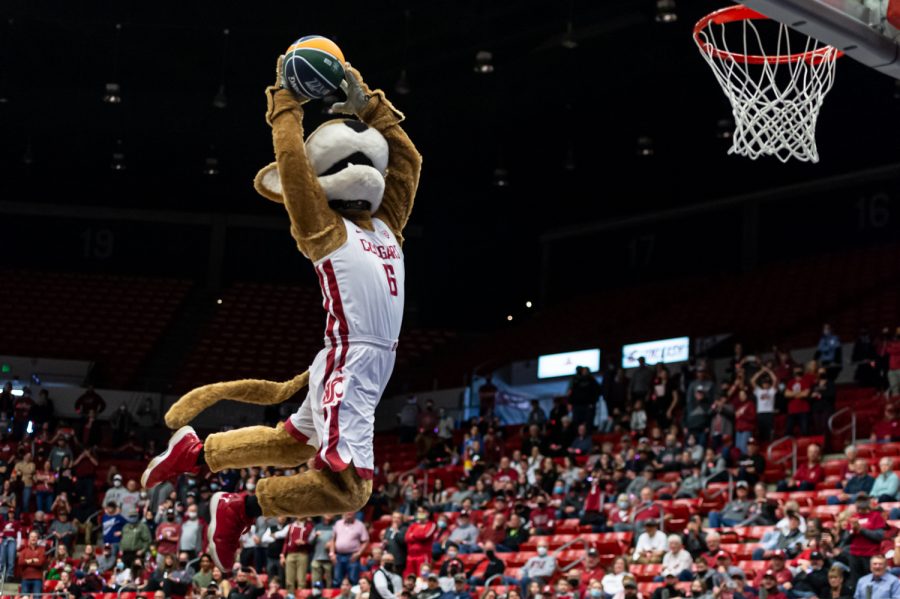 Butch T. Cougar dunks the ball during halftime of an NCAA college basketball game against Oregon in Beasley Coliseum, March 5.

This season was one of the ultimate “what if” years for WSU fans. Between injuries and inconsistencies on both ends, the Cougs faltered to a 18-13 record and the seventh seed in the Pac-12 Tournament.

That is by no means to say this season was a disappointment or a failure. WSU continued their upward progression. The 18 wins are the most since the 2011-12 team that won 19 games and reached the College Basketball Invitational final. The seventh seed is the best since the 2010-11 season, when the Cougs finished sixth in the Pac-10. It is also the first winning record in league play since an 11-7 record under Tony Bennett in 2007-08.

That is all to say that this team in no way disappointed WSU fans. It was a special season and I truly feel lucky that I was on the front lines covering the team this season.

However, this final Oregon game showed us just what this team could have achieved had they hit their stride earlier. Eleven games this season ended with WSU losing by single digits. Six of those games were single possession losses, including losses to Oregon, Arizona State and both games against a ranked USC team.

The three-point percentage dropped 2% from the season average in those games. However, the Cougs were shooting an average of more than 30 threes per game, while hitting just 10. There were also 11 games this season where the Cougs hit more than 40% of their three-point attempts, including this Oregon game where they hit on 47.1% of attempts.

WSU went 12-2 in games where they shot better from three than their season average. In games below the average, WSU’s record dropped to 6-11.

If WSU won all six of their tight games, they would be 24-7 with a conference record of 15-5. The Cougs would have been dancing into the NCAA Tournament.

There is a large question mark looming over the program moving forward as leading scorer and locker room presence Michael Flowers is moving on after his one year on the Palouse. Flowers averaged team-bests with 14.2 points and 3.4 assists, while shooting better than 40% from the field and hitting 38.9% from three, the best for any Coug taking at least 250 shots.

There will also be the question mark of potential transfers. Players like Andrej Jakimovski, DJ Rodman and Dishon Jackson are all starting-level players, but there is not a clear path for any of them to grab a starting job next season. We saw Aljaz Kunc move on after last season and play more minutes with a 20-win Iowa State team than he ever did at WSU. Do any of these players move on? I truly hope not, but I would fully understand if one of them decided that was best for their progression.

So where does this leave WSU? It leaves them in a spot where if everything stays the same, they will continue to be a contender for a top-four spot in the conference. WSU will likely look to the transfer portal once again after the success that Flowers and Tyrell Roberts saw this season. Seeing those two put up phenomenal numbers also likely makes WSU a more appealing landing spot for transfers.

All in all, this was a special year for WSU basketball and another step in the right direction by head coach Kyle Smith. Could and should it have been even better? Probably. This team was loaded with talent. They should have performed better at times and should be in tournament talks at this time of year. But a likely National Invitation Tournament berth, a winning Pac-12 record and 18 wins is by no means a disappointment. That is a hill I am willing to die on.

Watching this team has been incredible and should leave WSU licking their chops for 2022-23 rather than complaining about what has happened this year. Plus, this could be a team that makes a run in the Pac-12 Tournament and still makes a splash this season.