Cougs win one in Frisco Classic 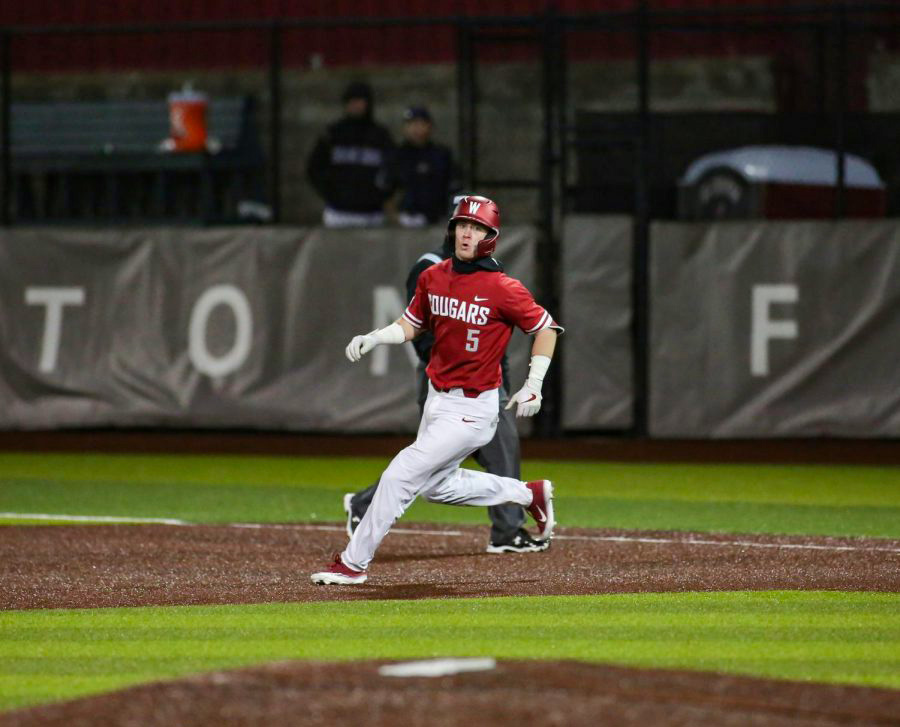 Jack Smith travels the base paths during the 2020-21 season.

The WSU baseball team (7-5) competed in the Frisco College Baseball Classic this weekend and went 1-2 in their games. Friday was an 11-6 victory over the Texas A&M Aggies and Saturday was a 2-8 loss against Wichita State. WSU finished the classic Sunday, losing 5-6 to the Iowa Hawkeyes.

“First off, honored to be here, so pumped to be a part of this tournament,” WSU head coach Brian Green said.

Friday was the Cougs’ only win of the weekend as they defeated the Texas A&M Aggies 11-6. The Cougs scored their 11 runs on 12 hits and had one error, while the Aggies scored their six runs on eight hits and an error themselves.

“I came back, wanted to stick to my routine, stick to the process,” Taylor said.

The game started off slow for both teams, with the first inning producing one hit from the Aggies and three-up, three-down for the Cougs. The first runs of the game came in the bottom of the third inning, when the Cougs scored three runs. Kyle Russell had an RBI single to bring the lead, 3-0.

The fourth inning was all Cougs, sending 13 batters to the plate and scoring eight runs. Russell had a two-RBI single in the inning to bring his RBI total to three for the game. The Cougs had six hits in the inning.

The Aggies got on the board in the fifth inning with an RBI single and then followed it up in the sixth with another RBI single. The game then went scoreless until the eighth inning when the Aggies scored again on a wild pitch to bring the score to 11-3, which was the final score of the game.

Saturday was a rough offensive game for the Cougs, as they only scored two runs in the on seven hits and three errors. The Wichita State Shockers scored eight runs on eight hits and had no errors for an 8-2 win. The pitching loss for WSU came from McKabe Cottrell, whose record on the season is now 1-2.

“The story of the game was free-bases on our side,” Green said postgame.

The first runs of the game came in the second inning from the Shockers, on a two-RBI single. The third inning was scoreless for both teams.  In the fourth, Wichita State had one hit and scored two runs. In the bottom half of the inning, Collin Montez hit a solo home run to bring WSU’s deficit to 1-4.

The last run for the Cougs came in the eighth inning with a home run from Justin Van De Brake. The Shockers scored three more runs in the ninth inning to bring their total to eight. The final score was 8-2.

WSU followed up their loss Saturday with a 6-5 loss against the Iowa Hawkeyes. Tyler Hoeft earned the pitching loss for the Cougs, bringing his record to 1-2. The Cougs scored their five runs on eight hits with zero errors, while the Hawkeyes scored six runs on eight hits and zero errors as well.

The Cougs started their scoring early, scoring two runs in the first on RBI singles from Bryce Matthews and Van De Brake to take an early 2-0 lead.

In the second inning, the Cougs followed up their two runs by scoring on a wild pitch to lead 3-0.

Both teams then went on a dry spell, with no runs being scored until the sixth inning, when the Hawkeyes put up four. Two doubles in the inning helped the Hawkeyes score their runs. Iowa also scored on a wild pitch to lead the Cougs 4-3.

The Cougs tied the game up in the seventh with a home run from Hylan Hall. The Hawkeyes regained the lead on a homerun with the score now 6-4 heading into the eighth.

The Cougs got a run back in the eighth on an RBI fly out to cut the lead to one, but the Hawkeyes shut the Cougs down in the ninth and won the game 6-5.

The Cougs return to Pullman to play their first conference home series of the season against the Oregon State Beavers. The first game of the three-game series will be Friday.