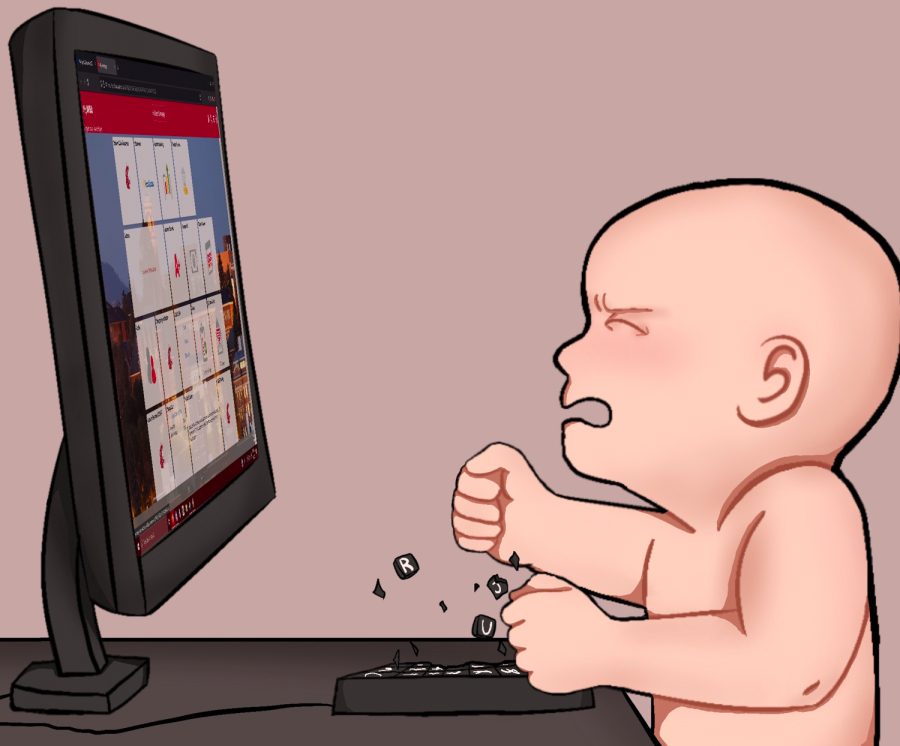 Website design so simple, a baby could do it!

Never let it be said that WSU administration does not listen to its students.

After some childish comments on the design and … functionality … of the iconic MyWSU website, the administration jumped right into action. Pooling money from parking tickets and profits from the Starbucks in The Spark: Academic Innovation Hub, they announced a contest to redesign the site.

A number of different big-name tech companies participated, including Apple and Amazon. Even Disney initially threw their hat in the ring!

Some of WSU’s clubs also stepped up, creating sleek and workable websites to replace the aged MyWSU. But of all of the competitors, we at The Daily Evergreen are proud to announce the winner of the contest …

All the companies and clubs that participated in the contest were reportedly furious with the school’s administration. Many questioned why the administration wanted a design so close to the first.

“I was frankly surprised that they hadn’t won the bid for the original design,” said Apple spokesman Hon E. Crisp. “It already looks so much like their previous work it only seemed natural they were selected.”

To facilitate the brainstorming session for the design, Gortle gave the kindergarten students a bowl full of M&Ms and a toy computer, telling them to go wild.

“While it took a little prompting and direction for their little hands, they were naturals,” Gortle said. “They really gravitated towards big buttons even though clicking them didn’t really lead anywhere.”

While the kindergarteners could not do much of the actual coding, they tried their best, Gortle said. The effect for WSU admin, apparently, was jaw-dropping, evidenced by the clear victory for the class.

In all honesty, when we showed the two websites together we could not tell the difference between the two. The only way that I ended up being able to figure out the new one from the old was the 53 unread notifications in My Comm Center.

“That is the beauty of it all,” said Gortle. “People may think the design, weird spacing and uninformative instructions are counter-intuitive. Well, that is because it is!”

The design philosophy has carried both old and new forward into 2022 for the federally funded university. The only thing missing is a tagline reading, “We are nostalgic for the early 2000s, your websites should be too!”

For those who are already missing the old design of MyWSU, fear not, many of the fan-favorite features will be returning.

Long loading times for literally anything you click, whether the home screen button or financial aid? The kindergarten class could not resist leaving this essential feature.

Text that is somehow aggravatingly too small while also covering your entire screen? It would not be MyWSU without it!

A quick links section that is slower than manually typing out the web address? Gotta work on those keyboard skills!

“I was a little anxious about the redesign,” general studies major Jonathan Doe said. “But I am glad they are only taking away the bad features. I don’t know what I would do without the Fall 2020 Survey notice that I still haven’t taken in the bottom right corner of my screen.”

The best part of the redesign is that tradition is being maintained at WSU. The time-honored ritual of registering for classes that only take place that semester, just to have the website crash, will be preserved forever. I mean, why fix what is broken?

If I could suggest one improvement to the process, I would like a laughing emoji to appear the moment you see the class you need to graduate is full with no other sections available. That would truly encapsulate the feeling of joy we have all gotten from accessing MyWSU.

Even some parents are getting in on the positive feedback for the redesign. We were able to get into contact with one parent through the MyWSU messaging system.

“I am glad that they are finally changing that old site,” said parent Helena Much. “Every time I try to pay for my daughter’s tuition, the text is only on the corner of the page with a bunch of white space in between. Wait, what do you mean they didn’t cha…”

Unfortunately, Much had some problems sending the rest of her message, she said. She is currently on hold with technical support for the website, which is also staffed by Mrs. Gortle’s kindergarten classroom.

We are glad that Mrs. Gortle’s kindergarten is able to continue working with WSU after their past successes working with the GET Food app and Canvas.