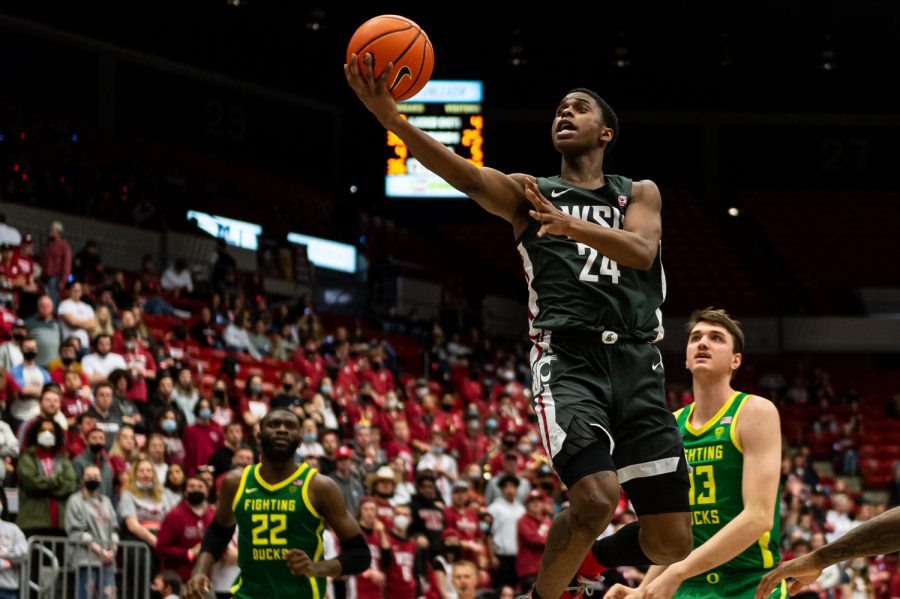 WSU guard Noah Williams (24) jumps for a layup during the second half of an NCAA college basketball game against Oregon in Beasley Coliseum, March 5.

With WSU men’s basketball done with regular season play, the team now looks to make a run at the Pac-12 title this week.

For many teams in the Pac-12, their only hope for a bid to the NCAA tournament now rests solely on their performance during this week in Las Vegas, as only Arizona, UCLA and USC have presumably secured bids. All conference winners (32 total) receive an automatic berth to the tournament, and the NCAA selection committee is then tasked with giving out the rest of the at-large bids (36 total) to round out the massive 68-team bracket.

WSU is one of those teams that needs a positive showing in the tournament to have any shot at being considered for the March Madness tournament. A berth in the National Invitation Tournament seems a likely fate for the Cougars, surpassing last season’s squad, who earned and declined a College Basketball Invitational invite. That was the right call, in my opinion; if two selection committees pass you up and your only option is a pay-to-play tournament, it is better to look toward the off-season for opportunities to improve.

Considering the way the Cougars have played as of late, a postseason run is not totally out of the equation. The Cougars could pose a real threat in the tournament as they have won three of their last four games. In those three victories, WSU has seemingly found their rhythm offensively, showcasing better ball movement and better shot selection. The Cougs highlighted their offensive prowess in the blowout victory over Oregon on Saturday.

WSU finished the season with an improved conference record of 11-7, marking a new high-point in the program since the 2000s.

We should remember not too long ago when Oregon State went on a run last year that shocked the college basketball world — winning the Pac-12 tournament for the first time in program history and making it to the Elite Eight in the NCAA Tournament. Last year’s Oregon State squad carried momentum into late March, knocking off elite teams like Tennessee, Oklahoma State and Loyola Chicago before finally losing to Houston. Granted, Arizona was absent last year from the Pac-12 tournament after a postseason ban. Now back in competition, Arizona is the favorite to win, outside of USC and UCLA. Last season’s tournament showed any team could go the distance in the Conference of Champions and prove themselves an elite caliber on the national stage.

The Cougars open play Wednesday against the California Golden Bears, a team WSU has defeated twice this season. With the outstanding play on the interior from big men Efe Abogidi and Mouhamed Gueye, the Cougars should advance so long as the three-ball falls from deep.

A win over Cal sets up a battle with UCLA on Thursday. The Bruins won the last meeting with WSU, beating them by a comfortable 20 points in a 76-56 win in Los Angeles. After the conference tournament, all teams await their fate on Selection Sunday as the Committees reach a conclusion for the NCAA Tournament and the NIT.