Cougs advance to second round of Pac-12 Tournament 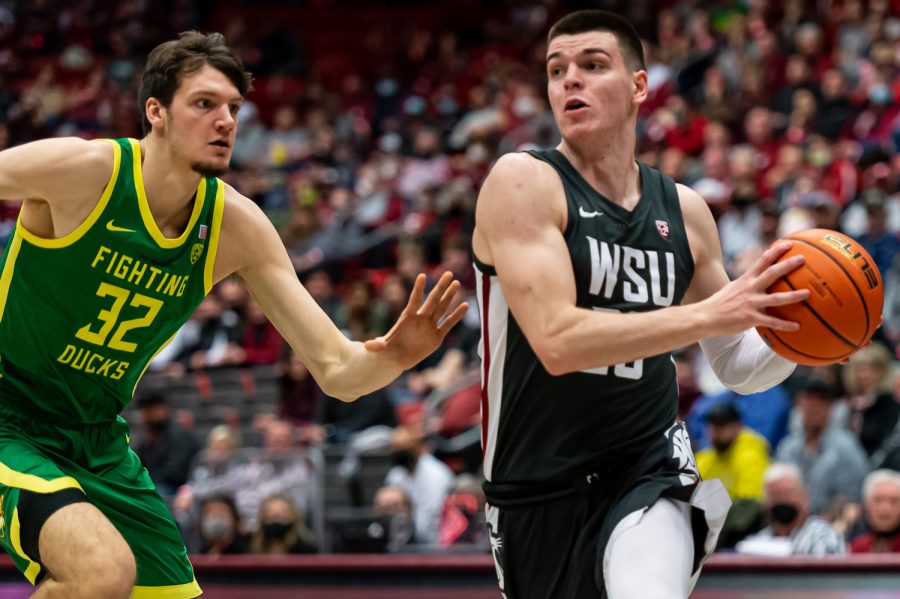 WSU got off to a hot start, leading 9-2 and never trailed the entire game. Efe Abogidi got the Cougars going, becoming a problem for Cal on the interior and finishing the first half with 11 of his team-high 19 points. Abogidi was responsible for the team’s final eight points of the half from inside. Abogidi ended the game shooting 41% from the floor. In the absence of Mouhamed Gueye, who recently won his fifth Pac-12 freshman of the week, Abogidi stepped up in a big way to help WSU to a 32-20 lead at half-time.

“We just focused on putting the ball in the post,” Abogidi said after the game. “Just being confident and being patient in the post, I think that was the focus for me today.”

The Cougar defense held the Cal offense to a 23% shooting percentage (8 for 35) in the first half, this included three blocks and three steals during that period. Meanwhile, the Cougar offense was shooting a healthy 13-28 (46%) from the field going into the locker room.

“Our zone [defense] was good and we were able to make our free throws,” WSU head coach Kyle Smith said. “I think both teams went to the (free-throw) line a lot this game.”

WSU boasted a stiff 3-2 zone-defense that disrupted a lot of Cal’s shots, despite them managing a few open looks.

Despite being in the starting line-up in the game, guard Noah Williams only logged about three minutes in the first half due to foul trouble. This allowed for guard TJ Bamba to contribute important minutes and score eight first-half points. Andrej Jakimovski also got the start in Las Vegas and was able to provide WSU with 10 boards despite only putting up two points.

“TJ and Andrej are really good in zone; they are just smart and crafty guys that can go after the ball,” Smith continued.

Jakimovksi and Bamba’s length on the perimeter made the 3-2 zone hard to deal with for Cal, who struggled to find soft spots in the zone at the high elbow and in the corners. In a backcourt that yields undersized guards Tyrell Roberts and Michael Flowers, WSU’s defensive chess pieces off the bench were an important contribution to the Cougars’ defensive efficiency.

Whistles came early and they came often during the second half. The Golden Bears played in the bonus for approximately the last 15 minutes of the contest. Both teams shot a whopping 41 free throws combined in the second half, with the Cougars ending the game shooting 87% from the charity stripe and Cal shooting 72%.

The sudden rise in foul calls allowed for the Golden Bears to pull within four points in the closing minutes. Roberts was able to settle the game for the Cougars and get the lead back up to 14 with under five minutes remaining — WSU’s largest lead of the game.

“We closed it out by being poised and by being patient,” Roberts said. “Some shots were falling for me today, so coach kept saying ‘feed the hot hand’ and I was able to knock ‘em down.”

It was not a pretty game, but it was a win for the Cougars, which is really all that matters in the month of March in the world of college basketball.

“Cal is very physical and they bother us with their physicality,” Smith said. “They got on the glass and were able to get [about] 20 offensive rebounds.”

WSU played UCLA Thursday night in the quarterfinal round, losing  65-75. UCLA will square off with the winner of the UW-USC matchup in a Friday semi-final game.