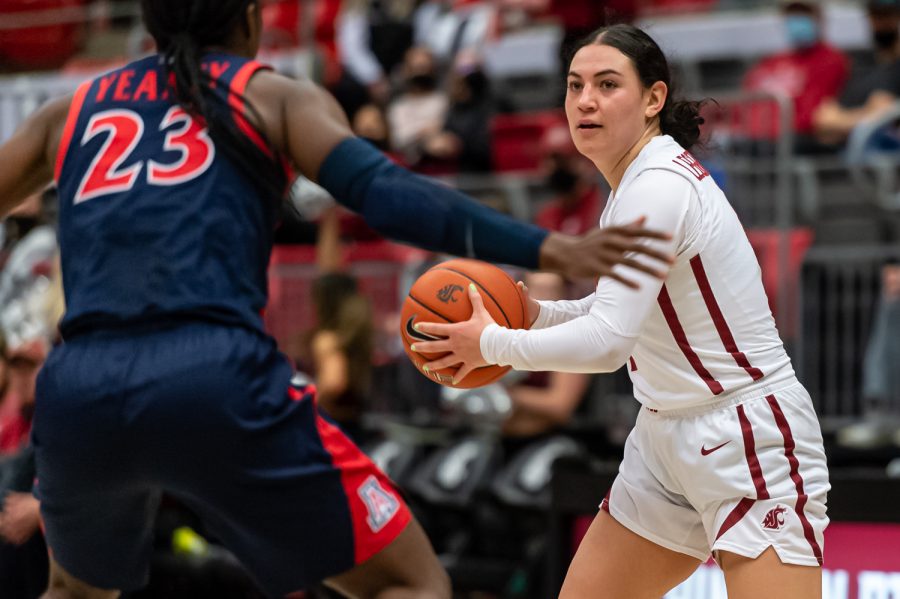 WSU guard Krystal Leger-Walker looks for a pass during the first half of an NCAA college basketball game against Arizona in Beasley Coliseum, Feb. 20.

Fresh off a second-round loss in the Pac-12 Tournament, WSU women’s basketball is ready to tango for the second straight season, earning an at-large bid in the 2022 NCAA Women’s Basketball Tournament.

The Cougars are the No. 8 seed in the Bridgeport Region and take on No. 9 Kansas State in the first round in Raleigh, N.C. The matchup will begin at 8:30 a.m., Saturday in PNC Arena.

WSU went 19-10 this season and finished tied for second in the Pac-12 Conference with an 11-6 conference record. The 19 wins were the most in program history during the NCAA era. The 11 Pac-12 wins became a program record for the most conference wins in a season.

The Cougars are seeking their first NCAA win, 0-2 all-time in the March Madness tournament. WSU was first selected as a No. 11 seed in the 1991 NCAA Women’s Basketball Tournament. The Cougs lost in the first round to No. 6 Northwestern, 82-62. Last season, WSU was a No. 9 seed and lost to No. 8 South Florida, 57-53.

The Cougars returned all five starters from last season’s tournament run, featuring All-Pac-12 team honoree Charlisse Leger-Walker. Dominance in the post will be an important part of the offense in this year’s tournament and Bella Murekatete, 2021-22 Pac-12 Co-Most Improved Player of the Year, plans to fill the role. She averaged 10.6 points per game this year, an improvement from last season that helped the Cougars reach March Madness.

Johanna Teder is peaking at the right time, scoring 21 against a highly ranked Arizona team. Krystal Leger-Walker continues to prove how essential she is to this Cougars team, averaging 4.6 assists a game, ranking second in the Pac-12. Krystal has the vision of a true guard, finding open teammates and taking advantage of defensive mistakes.

Kansas State enters the tournament with a 19-12 overall record and a 9-9 conference record, placing them sixth in the Big 12. Junior Center Ayoka Lee leads the way for the Wildcats, averaging 22.4 points and 10.6 rebounds per game. Lee had an astonishing 61 points against Oklahoma on Jan. 23, an NCAA single-game scoring record.

The winner of Saturday’s first-round matchup will move on to play the winner of No. 1 NC State and either No. 16 Longwood or No. 16 Mount St. Mary’s on Monday.