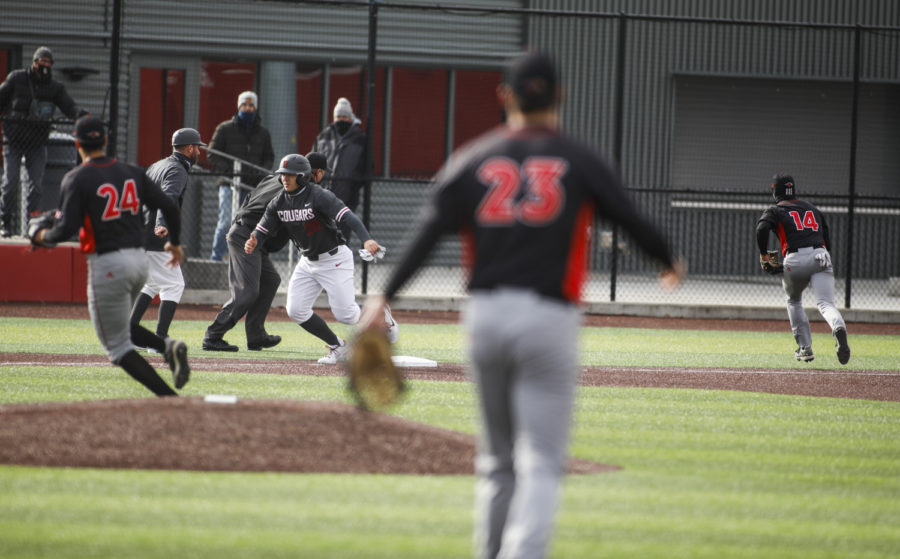 Then-graduate first baseman/catcher Tristan Peterson takes off from third base against Seattle U March 6, 2021, at Bailey-Brayton Field.

WSU baseball (9-10) lost all three games in the first Apple Cup matchup of the season to the Washington Huskies (12-8). A lack of offense from the Cougs and simple defensive mistakes helped the Huskies complete the sweep in dominant fashion.

The Cougs scored their two runs on four hits, while the Huskies’ three runs came on 10 hits. Both teams had zero errors in the game. For the Cougs, their runs came off an RBI single from Kodie Kolden in the top of the second and a solo homer from Kyle Russell in the top of the eighth.

Game two was a struggle for the Cougs, losing 8-2. They could not string anything together offensively and had two errors. The Cougs’ two runs came on two hits, while the Huskies scored their eight runs on 13 hits.

WSU’s Cole McMillan picked up his first loss, bringing his record to 1-1. Calvin Kirchoff also has a 1-1 pitching record for the Huskies after getting his first win Saturday. The Cougs did not cross home plate until the top of the seventh inning when they scored their two runs. By the time the seventh inning came, the Huskies already had all eight of their runs on the board. A two-run home run from Nate Swarts was the only highlight of the game for the Cougs.

The Huskies got their scoring done early, scoring a run in each of the first six innings, with three runs in the third. Five of the Huskies’ runs came off of singles, with a home run and a bases-loaded walk to round off the scoring.

The final game in the Apple Cup produced the same result as the previous two games of the weekend — offensive struggles and errors from WSU. The Huskies scored 14 runs on Sunday and defeated the Cougs 14-3. The Cougs’ three runs came on four hits, compared to Washington’s 14 runs on 13 hits.

McKabe Cottrell picked up his fourth pitching loss of the season for the Cougs, now sitting at 1-4. Josh Emanuels picked up his first win for the Huskies, with his record now at 1-1.

Two singles and a few errors gave the Huskies a 3-0 lead in the third. WSU replied in the top of the fourth inning with a three-RBI single from Jack Smith to tie the game at three. Washington answered in the bottom half of the inning and scored five runs, including a home run to lead 8-3. Three more runs were scored in the sixth by the Huskies by way of an error from the Cougs and a bases-loaded hit by pitch.

The next time the Cougs take the diamond will be at 6 p.m. Wednesday in Santa Clara, Calif. for one game against the Santa Clara Broncos.