Experience of a lifetime: traveling to the NCAA Tournament with the team 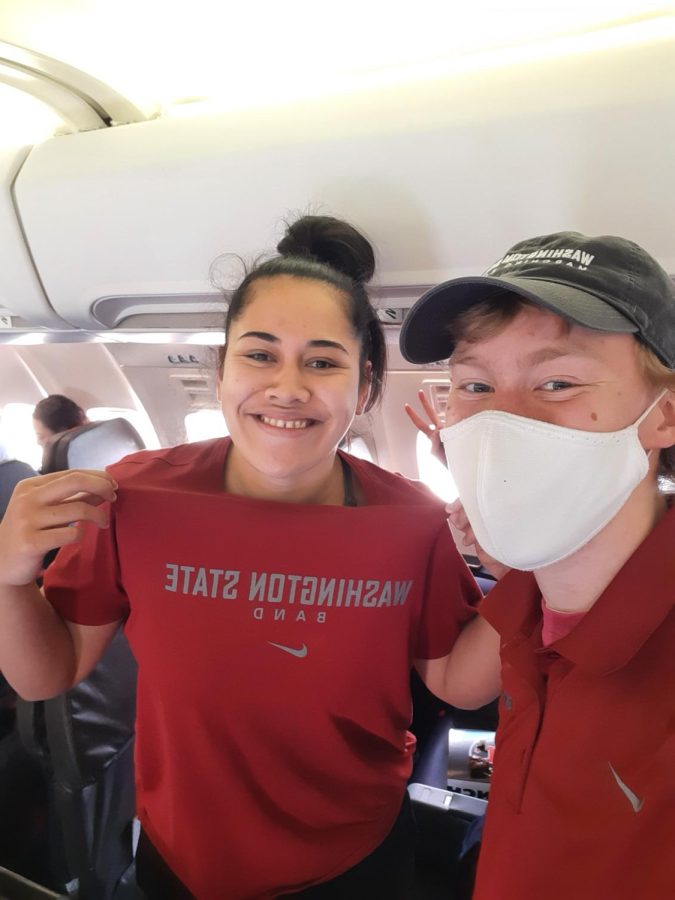 Over spring break, I had the pleasure of traveling with the WSU women’s basketball team to Raleigh, N.C., for the NCAA Tournament as part of the band.

This is my first year on campus and my first year in basketball band. Entering the season, I did not know much about WSU women’s basketball. After the Cougs recorded their best season in program history, it is clear that I am extremely fortunate to witness such an incredible year.

Fourth-year head coach Kamie Ethridge is clearly one of the best coaches in basketball today. Building a program from the ground up is never easy, but Coach Ethridge has tackled the task head-on to produce an all-around incredible culture. It is telling that prior to Coach Ethridge taking the reins, the Cougs had only qualified for the tournament once, in 1991.

That kind of winning culture and team chemistry was evident on the long plane ride to North Carolina. Despite the early morning bus ride to the airport and long flight, the players had a lot of energy. Senior Ula Motuga’s energy is contagious. Mid-flight, she started teaching some of the players card games.

Prior to take-off Motuga looked over at me and asked, “Do you want to see something?” I was not expecting to talk to any of the players on the flight, but I quickly said sure. Motuga then revealed that she was wearing a crimson Washington State Band t-shirt, “I’m one of you guys!” she exclaimed.

The other players were just as entertained as I was with questions such as, “How did you get that?” Motuga laughed and said she would never tell.

I, of course, took this opportunity to get a picture with Motuga, one of the most well-liked players on the team and a band favorite. When some of my band friends took a picture with Ula later that day, she insisted on showing off her Washington State Band T-shirt to them as well.

Small gestures like this are why the Cougar community quickly fell in love with this exciting team. It certainly helps when the team’s energy off the court shows up on the court too.

The Cougs set program records in overall wins (19), conference wins (11), earned a first-round bye in the Pac-12 Tournament and qualified for the NCAA tournament for the second consecutive season for the first time in program history.

Although the Cougs came up short in both the Pac-12 Tournament and the NCAA Tournament, it is clear they have the recipe for success.

Our band director, Sarah Miller, said something that resonated with me after the game.

“I feel like this is a game where we truly made a difference,” Miller said.

It was true. The 30 of us comprised the majority of the Cougar fans in attendance. Understandably so too. There are not a lot of Cougs who can travel last minute across the county since the bracket was revealed only six days prior to the game.

Miller attended Kansas University, the arch-enemy of our tournament opponent Kansas State. At the request of another band member with ties to KU, Miller taught us the “Rock Chalk, Jayhawk” chant, which we shouted during Kansas State’s free throws.

The chant, our continual enthusiasm and decent music kept the Cougar spirit alive and well in the NC State arena. So much so that we even converted some NC State fans who were waiting for their team to play next.

It was an incredible year made so by incredible players — the Leger-Walker sisters are true team leaders. Krystal Leger-Walker, who chose to spend one more season at WSU, scored her 1,000th point in college basketball this year and guided the Cougs to the NCAA tournament for the second year in a row. Charlisse Leger-Walker is quickly emerging as one of the best players in the Pac-12. Charlisse led the team with 16.1 points per game, good for third among players in the Pac-12.

Motuga and junior Johanna Teder were electric from beyond the arc, shooting 47% and 33%, respectively.

Our women’s basketball team is unique. For one, they stay out on the court after winning and celebrate with the fans and the band. They sing the fight song and cheer for the band. As a member of the band, it is truly validating to have the team cheer and recognize your efforts.

Both basketball teams are playing better or are on their way to playing better than they ever have before, so now is the perfect time to support both teams with equal fervor.

I would like to express my deepest gratitude to the women’s basketball team, from the players to the coaches, for letting the band travel with you to the tournament and support you.

I would be remiss if I did not shout out the band. The band is composed of some of the most dedicated Cougs I know. Games would be a lot less thrilling without the anticipation that “Jaws” brings and the WSU pride brought by the fight song. You each are the best.

It was an amazing season and I cannot wait to see what is next.