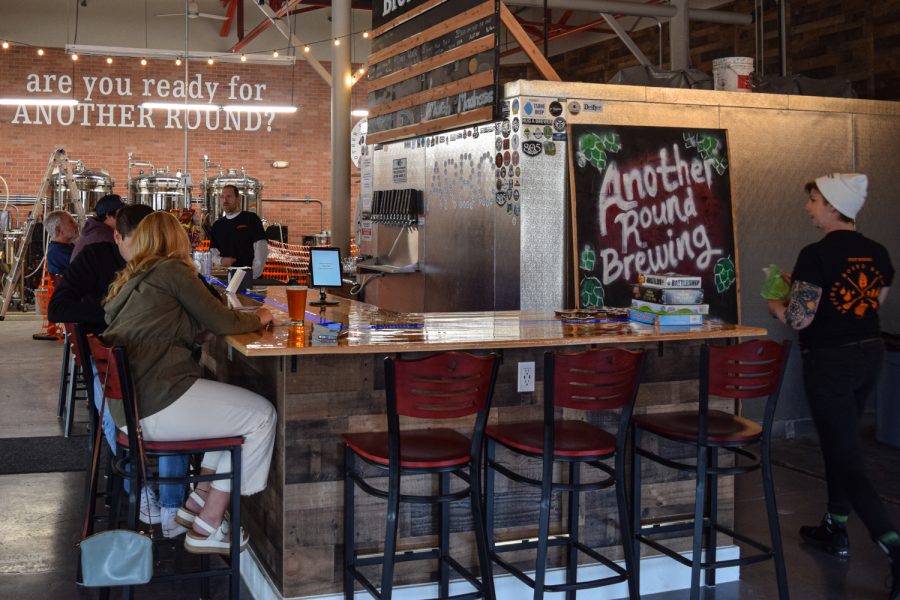 Kit Spelman describes the beers on tap to a group of customers at Another Round Brewing Company on March 23, 2022.

Kit Spelman was not always a fan of craft beer; he said he used to stick with domestic beers like Coors and Budweiser. A few years ago, Spelman was on a motorcycle ride through Sacramento when a friend suggested he try something locally made from Rubicon Brewing Company.

“I tried that amber and thought it was great,” Spelman said. “It was pretty similar to my own amber I have on tap, actually. It opened up my taste to something new and that’s what I hope to do here for the Pullman crowd.”

On March 1, Spelman held a soft opening for Another Round Brewing Company, the newest brewery here on the Palouse. Housed in the old showroom space on North Grand Avenue for The Retreat at Pullman, the brewery boasts ample seating, 12 rotating taps and indoor activities like corn hole.

As the owner and head brewer of Another Round, Spelman said one of his main goals is to introduce the college crowd to the world of craft brews, hopefully opening them up to new tastes and styles.

Spelman’s journey into the world of craft beer started in Sacramento, but the California transplant did not start brewing until later. He said he would visit a lot of breweries that did not offer what he was looking for, so he decided to make it himself.  He started with a small home-brewing system and quickly made connections with several local brewers around Elk Grove, Calif., where he was living at the time.

The co-owners and brewers at Flatlands Brewing Company, located in the Sacramento area, were instrumental in Spelman’s development as a brewer. He would bring over different homebrews, they would critique them together, and then he would improve on their notes for the next batch. He said he learned most of what he knows from working alongside the established brewers at Flatlands.

“I think the last three batches I brought to them they responded with ‘no notes’ and so I was ready to take the next step,” Spelman said.

Spelman said his ties to the area go back a few decades. He graduated from University of Idaho in 2003, and his mom works in the anthropology department at WSU. He decided to open Another Round on the Washington side of the state line in order to have more room to grow, as Moscow already has several breweries and taprooms.

After finishing his undergraduate degree, Spelman attended Sacramento State, where he earned his master’s in mechanical engineering.  He then worked as an independent contractor for several years, which allotted him the money to open Another Round.

“I wanted to be my own boss,” Spelman said. “I had not worked full time in a brewery before this, so it’s definitely been a trial by fire.”

Spelman signed the lease on the location at 745 N. Grand Ave. last October, and did most of the renovating himself over the following five months. He said he built every table in the joint using different epoxy mixtures so each one had a unique look, and also built the large wooden bar in the center of the brewery with a friend. He also converted the old showroom to a brewery space with proper plumbing, and attached siding that looks like natural brick and wood to give the space a modern, industrial feel.

Another Round has an open layout, so patrons can see Spelman brewing a new batch while enjoying their drinks. He said most of the brewing equipment came from Terrain Brewing Company, which opened in Pullman in December 2019 before closing its doors a few months later due to the pandemic. All of the spent grain from the brewing process is donated to a local farm where it is used to feed cattle.

According to Spelman, the brewery is already seeing some success. He said they had four beers on tap for the soft opening, and then added four more a week later. They already sold out of three of those offerings, and currently have two New England-style IPAs, an amber ale, a traditional IPA and a coffee stout on tap.

Although the brewery does not currently offer any food, he hopes to partner with local food trucks and is considering applying for a food permit to build his own menu. He said patrons are welcome to bring their own food in, especially since Cougar Country Drive In is right across the street.

“It’s a family-friendly space, kids are welcome, dogs are welcome,” Spelman said. “We have games like giant Jenga, corn hole and boardgames to keep the kids entertained.”

He said there will be a variety of event nights to help draw in the College Hill crowd in the next few months, including trivia nights and buy-three-get-one for $1 specials. Spelman hopes to grow the business in the coming years through canning and distribution, and even has dreams of establishing an annual beer festival in Pullman.