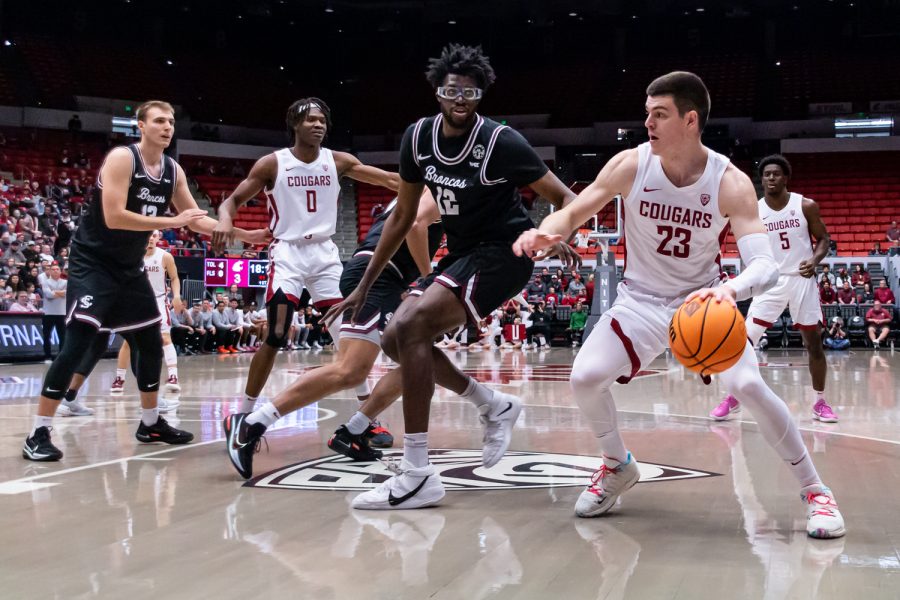 WSU forward Andrej Jakimovski (23) dribbles the ball toward the hoop during the first half of an NIT first round matchup against Santa Clara, March 15, in Beasley Coliseum.

The WSU men’s basketball team (22-14) came out of Provo, Utah with a win over BYU (24-10) in a game that ended 77-58 Wednesday night at the Marriott Center. WSU ended the home team’s season in front of a packed crowd of about 11,000 fans to advance to the semi-finals of the National Invitational Tournament in New York City at Madison Square Garden.

Both teams starting slow, going a combined 2-11 to start the game. Despite WSU starting the game going 4-16 from the floor and 0-5 from three, WSU was able to hang in the game and only trailed by two points at around the quarter mark of the game. WSU center Dishon Jackson was able to make his presence off the bench felt early on the interior, quickly posting six points and three rebounds.

BYU established a small lead that eventually grew to six points before WSU guard Michael Flowers got going from deep and the momentum shifted in favor of the away team. Flowers hit two back-to-back three pointers followed by a jumper, which got the Cougars a 29-22 lead on a 10-0 run with 5 minutes to go in the first half. Flowers and fellow WSU guard Tyrell Roberts orchestrated the offense efficiently during this time for WSU, with the team giving up zero turnovers in the first 15 minutes of play.

Mouhamed Gueye banked a shot from three – his seventh of the season – to open scoring in the second half, as WSU looked to build off its strong finish to the first half. After a quiet first half full of no-calls from referees, WSU tallied five fouls in the first five minutes of the second half. After a few bad offensive sequences for WSU, BYU mounted a run that cut the deficit to five with 13:52 to go in the game, prompting a timeout from WSU head coach Kyle Smith.

The BYU run was halted when Roberts managed to stop the bleeding for WSU and finally got it going after no points in the first 27 minutes of the game. Roberts made two shots from three-point range to put the lead back to 10, with WSU leading 49-39.

Flowers was able to make history Wednesday night, managing to break WSU legend Klay Thompson’s single season three-point record with his 99th made three-point shot. Flowers turned his historic basket into a four-point play after being fouled behind the arc. When Flowers followed this up with two more shots to start a 15-4 Cougar run, it took the life out of the Marriott Center and put the crowd back in their seats. With a commanding lead, WSU started to taste a Madison Square Garden appearance.

Flowers finished with an astounding 27 points, leading all scorers. Jackson grabbed a season-high 14 points, proving to be a force down low and on the glass with seven total rebounds. The WSU defense held the offensive-minded BYU team to only 58 points.

WSU now turns its focus to a semi-final matchup with Texas A&M, a program that captured a No. 1 seed in the NIT and was considered a huge snub from the NCAA tournament after an exceptional performance in their SEC tournament, just days before selection Sunday. The game will be at 6:30 p.m. Tuesday in Madison Square Garden on ESPN2.