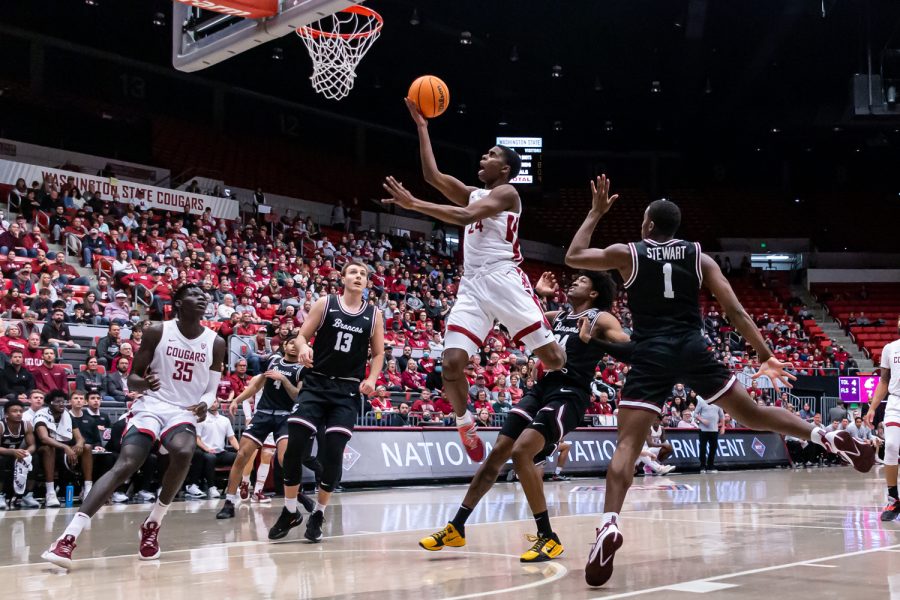 WSU guard Noah Williams jumps for a layup against Santa Clara in first round of NIT on March 15, 2022

The WSU men’s basketball team (22-15) fell to Texas A&M (27-12) on Tuesday night at Madison Square Garden in the semifinal round of the National Invitational Tournament, 72-56. The loss ended the Cougars’ best season since their 2011 campaign, which also ended in the semifinals of the NIT.

Texas A&M’s win over WSU sends the Aggies to the NIT final against Xavier.

The Aggies entered the tournament as a No. 1 seed and were part of the NCAA selection committee’s “First Four Out,” a term used for teams that narrowly missed the big dance. The four teams are made No. 1 seeds in the NIT.

After a stellar performance by the Aggies in the SEC conference tournament, where they beat fellow NIT participant Florida, followed by two monumental upsets over Auburn and Arkansas, the NCAA selection committee ultimately decided against giving Texas A&M an invitation to the NCAA Tournament.

Keeping with the theme of the season, WSU started the night cold from the floor on 1-7 shooting and committed a whopping five turnovers within the first eight minutes of the game. Despite struggles on the court, WSU managed to keep it tied 12-12 at the quarter mark of the contest. The Aggies capitalized off the Cougars’ mistakes and were able to get eight points off turnovers, proving to be devastating in transition with their athleticism.

The Cougar offense came to a standstill, allowing Texas A&M to spark a 9-0 run with six minutes to go before the half. The Aggies continued to pour it on the Cougs by growing the lead to 11 with under two minutes in the half. Of the Aggies’ 32 total points up to that point, an astonishing 26 of them came inside the paint against the porous WSU zone defense.

Despite the size advantage WSU center Dishon Jackson and forwards Mouhamed Gueye and Efe Abogidi had over the Texas A&M frontcourt, the Aggies controlled the paint on offense. The Cougars were unable to get any defensive stops and the deficit grew to 27 points around the halfway point of the second half.

The Aggies put up 58 points inside the paint, compared to WSU’s 16 points from down low and 56 points total.

“They were getting to the rack, which is what they do,” Roberts said after the game. “They were making contested ones and twos.”

Although WSU had a size advantage on the inside, it was the length of Texas A&M perimeter players that caused problems for the Cougar defense and ultimately won the game for the Aggies. The Texas A&M guards were able to get by the smaller WSU defenders as well as cause mistakes on the defensive end by smothering the Cougars at the top of the arc.