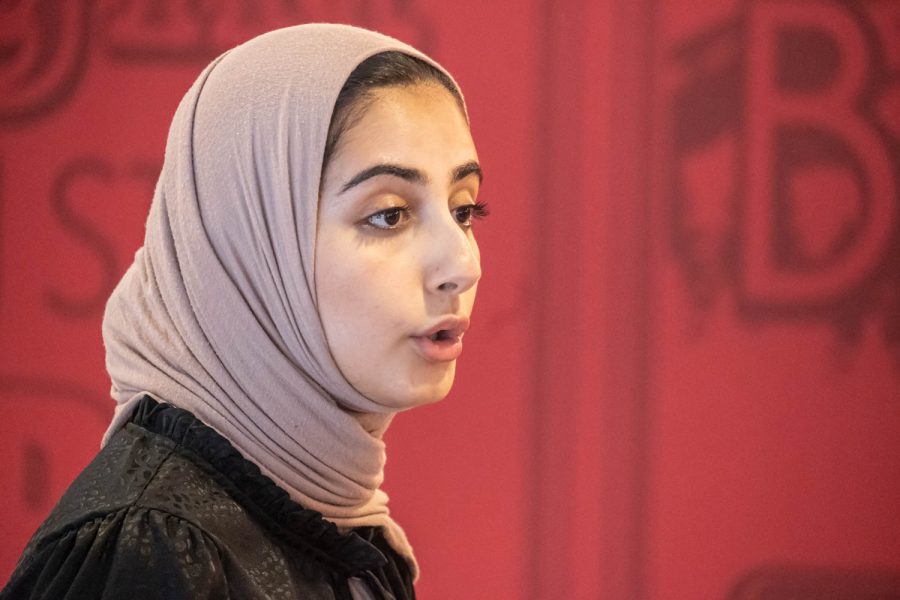 Fatimah Albaqshi, ASWSU director of community affairs, gives her input on the validity of alleged homophobic remarks in the executive team at an ASWSU Senate meeting, March 30, in the CUB.

Fatimah Albaqshi, ASWSU director of community affairs, updated the Senate on her recent work at their Wednesday night meeting.

During her term, Albaqshi said she has been involved in various initiatives such as Pullman 2040, communicating with City councilmember Francis Benjamin and organizing events such as Restaurant Week.

At the end of her presentation, Albaqshi addressed the recent allegations of homophobic comments made on the executive staff. Albaqshi said she does not believe the individual who is alleged to have made these comments did so.

Uncertified senator Geobanny Pineda Cuevas addressed the Senate during public testimony to say he believes not enough action has been taken to investigate the claims of homophobic comments recently made.

He said he is asking the individual to come forward privately so that work can be done to properly address the comments that were made. If nothing is done by Wednesday next week, he will go to the judicial board to ensure steps are taken to address the issue.

Ella Kisor, ASWSU director of academic affairs, spoke to the Senate about her recent work planning events and communicating with university officials.

Currently, they are working on hosting a lemonade and learning event and are hoping to see a large turnout, Kisor said.

They are also working on finalizing the Pursuing Equality and Social Justice credits behind closed doors. They are hoping to see these classes implemented by fall 2024, she said.

Gisselle Salazar, ASWSU director of legislative affairs, discussed her recent work on bills with the Senate. Out of the eight bills ASWSU has been pushing for, six passed. The other two were not passed for budget reasons.

An individual representing the Movimiento Estudiantil Chicanx De Aztlán co-chairs addressed the Senate during public testimony regarding the postponement of the multicultural banquet to the fall semester. She said postponing the event last minute because of a basketball game was unprofessional.

The Senate moved to confirm several members of the Crimson Group, which supports undocumented students.