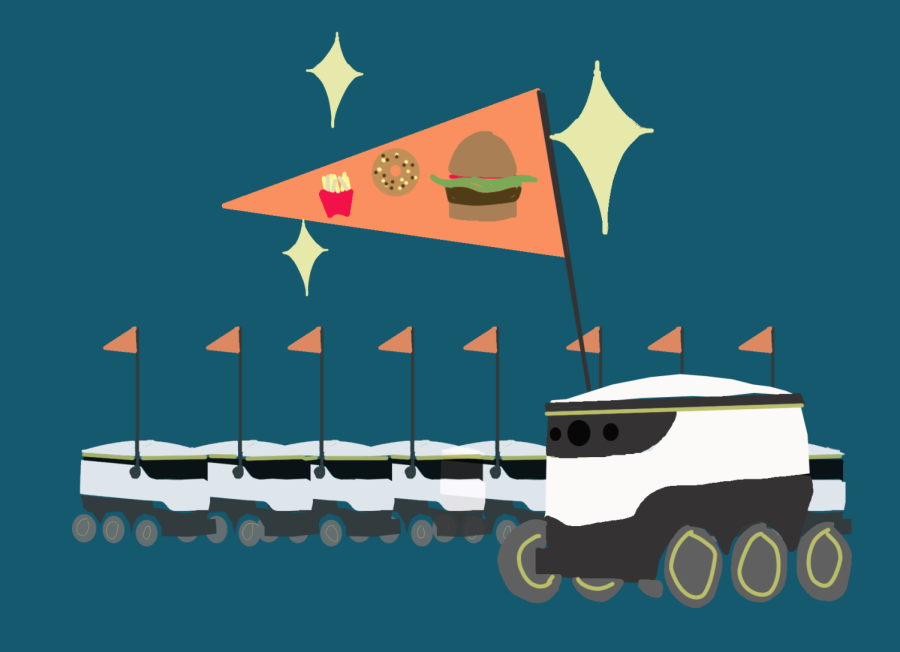 The little white robots now found on University of Idaho's campus are a collaboration between the school, Idaho Eats and Starship Technologies.

A fleet of robots has taken over University of Idaho, and the little creatures are not leaving anytime soon.

The rolling white robots are the university’s newest food delivery service for students and faculty alike.

“In the last two years of full-time market research and building, we’ve expanded to 25 campuses across the United States, and we operate robots in five different countries,” Tucker said. “Starship robots deliver things like groceries to people in Milton Keynes, United Kingdom, and they deliver all kinds of prepared foods and drinks on campuses throughout the U.S.”

Idaho Eats Marketing Director Kim Howe said UI is the first university in the state to welcome the new technology, and Idaho Eats has paired up with the fleet to deliver across the campus.

“We have Einstein Bros. Bagels, Qdoba and True Burger down in the LLC; they can order from the market, which is our convenience store, and Cravings by Joe, which is our late-night option,” Howe said.

The fleet of 15 food delivery robots are programmed to deliver only on campus grounds, but anyone with the Starship Food Delivery app and a credit card can order food and drinks and pick it up on campus, Howe said.

“Not only is it added convenience for students, but students’ meal plans, and faculty and staff who are on meal plans, can actually use those dining dollars to pay for the cost of the food and have it be delivered to them,” Howe said. “It’s just a great added value for students on meal plans.”

John Kosh, director of Business Development, Marketing & Communications for UI’s Auxiliary Services, said when UI was looking for a new partnership this year that could bring something exciting and dynamic to their campus, they paired with Idaho Eats.

“They offered a lot of dynamic ways we can bring excitement to the students, but also delivery, and out of the gate they bring us robots – mind blown,” Kosh said. “So not only can we reach any student, faculty or staff on the campus now, but it’s not just a set location; instant delivery to all. That really went above and beyond what we kind of initially hoped for.”

Starship’s soft launch at the university was on March 21, and after a positive reaction, they officially launched on March 23, Howe said.

“When you first see them, you’re like, ‘What is this?’ and we had that initial reaction for the first two weeks when we were mapping out the entire campus, you know, finding the shortest routes and safest routes,” Kosh said. “But now you’re just walking along the campus quad and there’s a robot rolling beside you and you don’t even think twice, and that’s how embedded it’s become in just a few short weeks.”