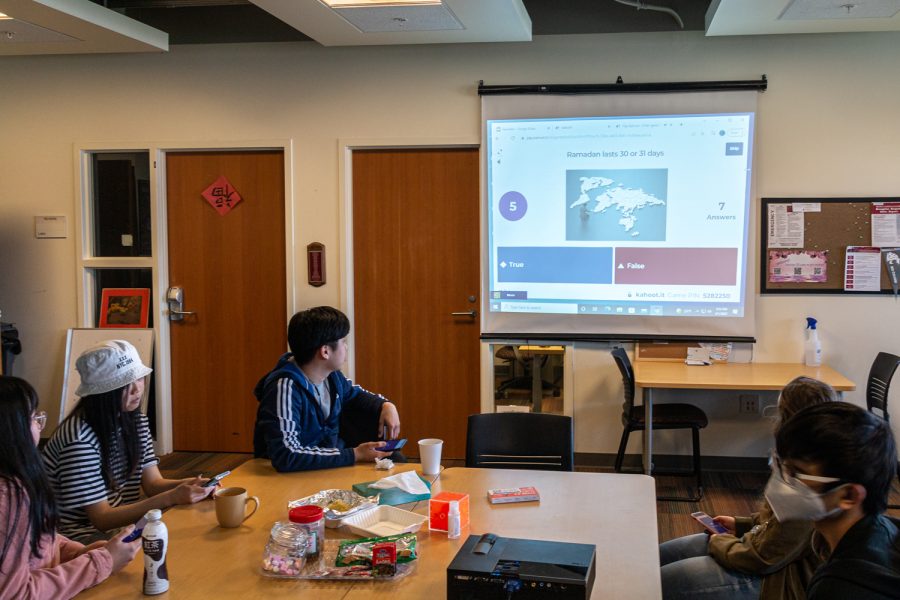 Students play a Kahoot about Ramadan during coffee hours, April 1, in the CUB.

Saturday marked the start of Ramadan, a holiday celebrated by those who practice Islam. The International Center’s Coffee Hour put together a presentation to explain to non-Muslims what this holiday means.

“The holiday is at the end of the month,” said Abbas Mammadov, political science doctoral student from Azerbaijan. “After you fast for a month, then you have the holiday, Eid-al-Fitr… [it] lasts for two, three days depending on the country.”

Eid-al-Fitr is the celebration marking the end of Ramadan.

“By the way, I think there’s a small difference between the two major sects in Islam: Sunni and Shia. Sometimes we see that one sect celebrates the holiday on a different day,” Mammadov said.

For those unfamiliar with the celebration, Ramadan commemorates the first revelation of Muhammad, Islam’s most important prophet. According to the IC’s presentation, Ramadan is the ninth and holiest month of the Islamic lunar calendar and one of the five pillars of Islam.

The five pillars are profession of faith, prayer, alms (charity), fasting (which is the pillar Ramadan falls under) and pilgrimage (one visit to the Holy city of Mecca in a person’s lifetime), according to the Metropolitan Museum of Art’s website.

“[Ramadan] is one of the five requirements of Islam, so it’s kind of a duty that every Muslim carries and needs to fulfill,” Mammadov said. “It’s all about connection. It’s all about our love to our God and devotion to our religion, to our faith.”

Ramadan allows Muslims to renew their faith and spiritual practice, according to the presentation. It is more than just abstaining from food and drink: it is a time to purify the soul, refocus one’s attention toward God and practice self-discipline.

“We have more connections [with God]; we should pray more and read the Qur’an, our holy book,” said Ibrahim Al Alawi, sophomore accounting major and IC intern from Oman.

Fasting takes place on a daily basis from sunrise to sunset. Practitioners begin with a pre-fast meal called the Suhoor, and at dusk, the fast is broken with a dinner called Iftar, according to the presentation.

“We usually break with the traditional food in my country. I’m from Oman, so we usually [break fast] with rice and chicken,” Al Alawi said. “We usually call those biryani, and [we eat] some dates.”

Mammadov said that dates are a common food to break fast across all countries. He eats eggs, cheese, butter, honey and other sweets for his Suhoor.

Although there is only a slight overlap, Lent from the Christian faith and Ramadan fall on similar dates this year. Comparisons between Ramadan and Lent have some similarities and major differences, Lamin Sanneh, professor at Yale University, wrote in an article for the New York Times.

“Fasting during Ramadan entails taking no food or water during daylight hours. Depending on the Christian tradition, fasting during Lent can mean skipping a meal, cutting down on food, refraining from meat on certain days or giving up treats, such as alcohol or chocolate,” Sanneh wrote.

Ramadan is probably more similar to Yom Kippur, the holiest day in Judaism, Sannah wrote. Although Yom Kippur only lasts a day, both Muslims and Jewish people have the same fasting regimen. The idea of submission to God and forgiveness are the most central themes.

Mammadov said that he knows people from Turkey, Saudi Arabia, Middle Eastern and Central Asian countries, and he may want to have some plans to celebrate the holiday, which ends May 2.

Join the IC on 3 p.m. Friday for a Desserts Around the World Coffee Hour. This event has tastings of various desserts, including Korean songpyeon rice cakes and French macarons. Sign up here, as there are a limited number of spots available.