Flight cancellations make travel to work, school next to impossible 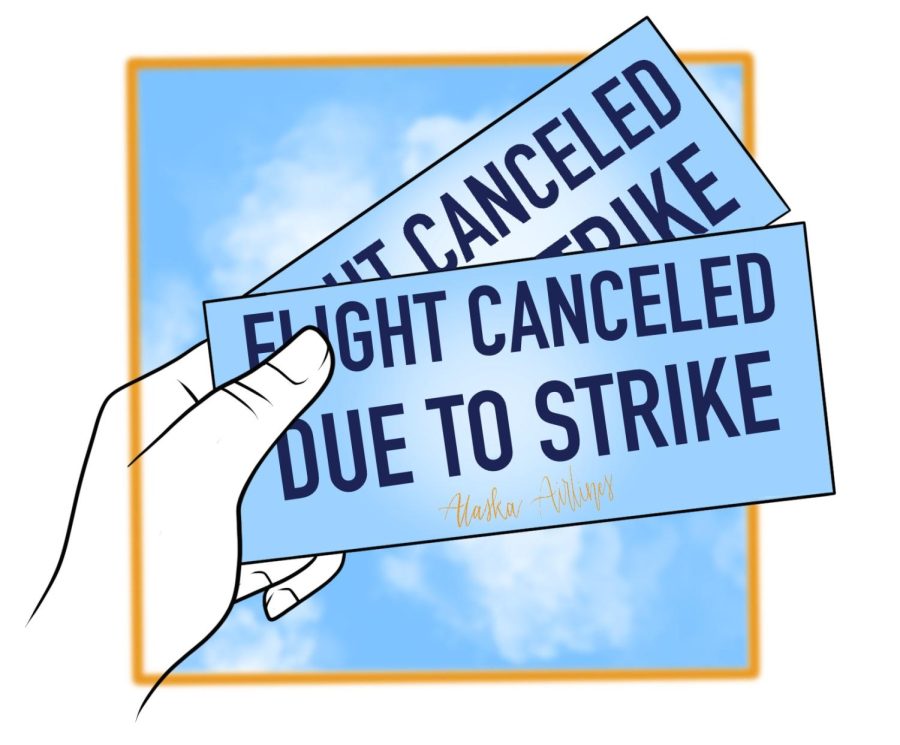 Last week, over 100 Alaska Airlines flights were canceled due to a pilot strike, according to CNN.

The pilots are frustrated with their current stalled contract negotiations. Essentially, they want to improve their contract that has been going back and forth with their union, Air Line Pilots Association, for almost three years.

While the improvements in the well-being of pilots and their job conditions are a necessary concern, the dissatisfaction of travelers and customers overrides support for pilot contract agreements.

The justified frustration of students and working individuals that depend on this airline to get back to school or to get to meetings is very important.

As university students, our main job is to focus on academic success. It is unacceptable in the eyes of some professors to use transportation as an excuse to miss an exam or lecture.  In the event that a flight is missed due to a strike or outside factor, there is no way to get back to campus in time as an out-of-state student.

“Since I live in California and Pullman only has two flights per day that are twelve hours apart, it would be very difficult to have any of my flights canceled since I cannot just go home,” freshman pre-law major Tannaz Moghaddas said.

It takes Moghaddas three separate flights to get back to the WSU Pullman campus, including a stop at Seattle-Tacoma International Airport.

For many university students, this chapter of their life is the first of many that includes flying and traveling alone. This scenario can be very stressful in itself, so to add the stress of possibly being stranded at an unfamiliar airport adds to that stress.

Luckily, Alaska Airlines’ policy is immediately rebooking an individual on the next available flight. However, with so many flight cancellations and, consequently, so many customers needing to utilize this policy, there are now overbooked flights with far more passengers than seats.

For individuals in the corporate world, their meeting schedules are not necessarily flexible, which poses an issue with missing flights.

If a meeting is missed, a job could be lost, which is why it is important for pilots to recognize that the security of their jobs are not the only ones on the line.

“In the last 30 days, I have had three flights canceled, all within a few hours before the initial take-off time,” said Peter, an MVP Gold 100k miles status member whose last name has been excluded for privacy reasons. “COVID-19 could be a possibility for the cancellations, but the events that the flights were for could not necessarily be rescheduled.”

Peter works in the managing side of the car industry, which is not a flexible job in terms of missing meetings. Considering his status with the airline, the expectation to be treated with more care goes without saying.

His events were so inflexible with timing that he had to rebook with a completely different airline. Alaska Airlines did refund the tickets, but the principle of treating loyal customers with utmost care and considering the urgency of their careers is important.

Even in the past with career strikes, including the teacher union strikes in past school years, more than just the people striking were affected. Students missed out on important parts of their school year and teachers ran the risk of losing their jobs.

In terms of flying and transportation, Alaska Airlines is at a financial risk, which includes a decrease in flights and the possibility of losing loyalty from customers that are not met with the satisfaction they signed up for and have received in the past.

Obviously, every person’s well-being in relation to their career is important, but the pilots of Alaska Airlines are not the only ones being affected.

Post-pandemic travel rates and demands have increased significantly, so hopefully the ALPA union and the Alaska Airlines employees come to an agreement for the well-being of their customers and their company.