Class of 2022 one of most diverse in WSU history; administrators say more work can still be done 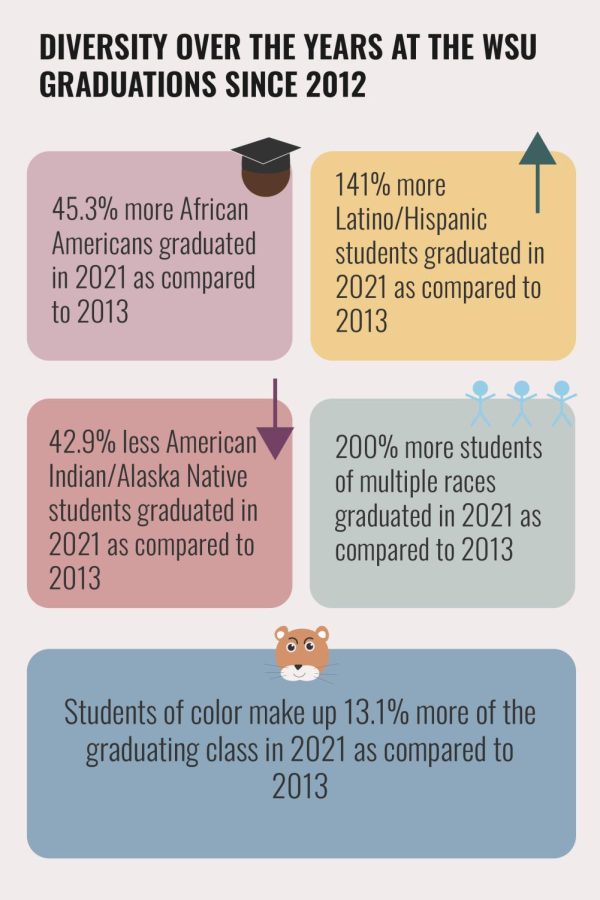 There has been a demographic shift in college-aged students over the last several years, said Saichi Oba, vice provost for enrollment management.

With the largest proportion of students of color, especially among the Black and Hispanic communities, the graduating class of 2022 is one of the most diverse in WSU history.

Saichi Oba, vice provost for enrollment management, said he believes some of the reasons for the increased diversity at WSU over the years include the changing in who WSU admits and the ending of standardized tests as a requirement to attend WSU.

“This is a continuation of a trend that WSU has observed over the last several years. We expect this diversity to increase,” Oba said. “There is a demographic shift in college-aged students that’s happening across the country. More underrepresented students are coming of college-age, so we expect that group to grow.”

The relatively recent change ending standardized test requirements will likely lead to an even more diverse student body in years to come, he said.

In regard to the high levels of diversity in this year’s graduating class, Oba said he was not surprised by much of the data or trends leading up to it.

“I think we’re doing really well at attracting underrepresented students. That has been a steady increase over the years,” Oba said. “Nothing has really struck me as completely out of the norm.”

Oba said the WSU administration believes they have made good progress in attracting minority students, but they are not satisfied. They want to continue to move forward and increase their numbers.

“I think we believe there’s a lot more room for more people and more students of color at WSU,” Oba said. “So I think we’re gonna continue that.”

There is not a specific goal for how diverse the student body should be, he said, but he thought among some of the most basic goals for WSU over the next few years is to make the university more affordable and accessible to underrepresented students through the right programs.

“I don’t think our work will ever be done. So I’ll tell you I have a really positive outlook on it,” Oba said.

Ellen Taylor, vice chancellor for Student Affairs, said the WSU administration has made efforts to diversify the student body, especially by reaching out to students of different backgrounds.

“We’ve worked really hard to reach out to first-generation students where that sense of themselves going to college might not be as clear to them,” Taylor said. “I believe we have a number of programs in place that are about reaching out to students in more rural areas and other areas.”

While the increased diversity of the student population may not feel observable, Taylor said she hopes people will notice it over time, though it may take a few years.

WSU Tri-Cities has enough Hispanic students for it to be a Hispanic-serving institution, while the Pullman campus’s numbers are not as high.

“I would love for our numbers to be high enough to be an HSI as well as a land-grant institution,” Taylor said.

WSU administration hopes to keep increasing diversity continuously, Taylor said. It is about creating a diverse environment where students can interact with people different from them, as well as creating opportunities for people who have historically faced barriers to higher education.

“It’s a commitment to keep doing better, and I don’t know what the finish line would look like exactly,” she said.

The main takeaway she had from the graduation data over the last few years was a question of what WSU could do to make sure the diversity rates stay high in the future.

Taylor said she was not surprised by any of the trends seen in the data, contributing a drop in international students to COVID-19.

“As I look at it, I see some numbers, and I say, ‘Okay, the pandemic didn’t do us any favors; that’s not a surprise. What do we do to get those numbers back up?’” Taylor said.

Taylor said another goal for the future of diversity at WSU is to spend more time on outreach programs. Currently, the university is developing programs to promote student success.

“I would love it if in the next few years we say, ‘Look at how we’ve changed in the last three or four years,’” Taylor said.