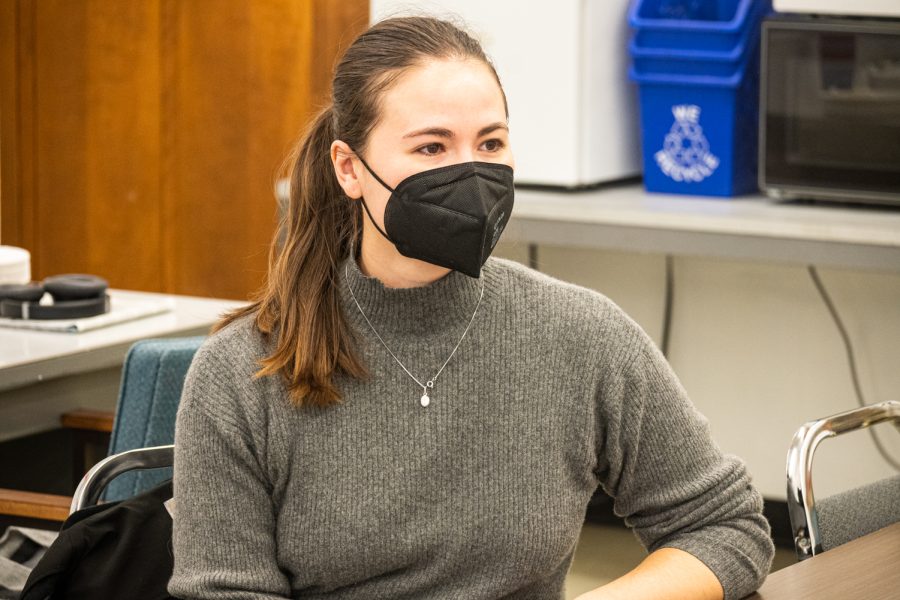 “She’s surpassed everyone who has taught her at Murrow, but she still has that same core of curiosity, initiative and voice that occupies her writing 10 years later,” said Benjamin Shors, Journalism and Media Production chair for the Edward R. Murrow College of Communication.

In 2012, then-WSU student and Daily Evergreen news reporter Andrea Castillo faced issues of self-doubt and wondered if her aspirations of being a print journalist were just a naive attempt to somehow change the world through the lens of youthful optimism.

In an interview she posted to her SoundCloud, she asked Al Donnelly, senior adviser of Student Publications if he thought it was important for students to follow their dreams even if they change from their original conception of what they thought they would study.

Ten years later, Castillo has answered the question she originally posed to Donnelly.

“This was after the Great Recession, and I had a lot of people say, ‘You’re never going to find a job in journalism and that print is dead,’” she said. “I think I just internalized that significantly and felt that I had to figure something else out.”

Castillo is now an award-winning immigration reporter for the Los Angeles Times and is currently based in Washington, D.C. covering federal immigration policy.

Castillo was born in Seattle by her mother, who immigrated from Venezuela. From an early age, Castillo said that she was always drawn to school and tried to capitalize on every opportunity given to her. She quickly gravitated toward writing and found that this was the subject she most excelled at.

“I could do math to a certain point,” she said. “But when I saw my options were either statistics or pre-calc, I knew my days were numbered.”

Castillo discovered her love for journalism during her time in the Running Start program. She said she fell in love with being able to ask people questions about anything and them feeling compelled to answer.

After she received a scholarship for two years at any school Washington school, the choice to come to WSU was made easy by their esteemed journalism department, she said.

“To be the child of an immigrant and seeing the sacrifices my mother went through to get here, and the struggles I saw her go through growing up, college wasn’t even a second thought. I had to go for her,” she said.

Castillo said one of her biggest mentors at WSU was Benjamin Shors, Journalism and Media Production in the Edward R. Murrow College of Communication. Shors was an assistant professor and adviser for the Evergreen during her time at WSU.

Castillo’s rise to a national and international voice for immigration coverage in the U.S. was planted in her years at Murrow and the Evergreen, Shors said.

She showcased a lot of her potential very early on, displaying a level of drive and innovation that is rare among students, he said. Even while at WSU, she was already receiving attention from national news outlets.

Castillo said that Shors helped her land her first job at the Oregonian by telling her to get her resume critiqued at that year’s Murrow Symposium.

“I literally thought I was going to teach English in Thailand,” she said. “I had no plans in journalism and didn’t even consider looking for jobs until Ben gave me the encouragement I needed to get my resume critiqued.”

At the Oregonian, Castillo initially started covering the Latino community, but transitioned mainly to hyper-local coverage in some of the Oregonian’s smaller papers.

Castillo said the transition from 20 years of classroom education to a professional newsroom with seasoned reporters from the Missouri School of Journalism at University of Missouri and Columbia Journalism School at Columbia University was frightening and intimidating. Her first year there was full of challenges and tough learning experiences.

Castillo wrote an article about a new city manager who legally changed his last name to Awesome. She said that he came across as very personable and easy to talk to and drafted a very glowing profile on him. However, she later found out that mostly everything on his resume was completely fabricated.

“My editor was like, ‘Yeah, this guy is full of sh-t, you need to background him,’” she said.

After two and a half years at the Oregonian, Castillo asked if the paper was going to prioritize immigration coverage, as she felt that was her true calling. When the paper said no, she could see the writing was on the wall, and her time there was up.

She then moved to The Fresno Bee, and said that her experience there was some of the most formative years of her professional career. Because it was a smaller paper, she felt a lot more valued, and it cultivated a team-oriented atmosphere that was very similar to what she experienced at the Evergreen.

Castillo said she was initially hired to cover immigrant communities of color, but she noticed a lack of coverage for LGBTQ+ communities.

“There was a lot of education that needed to be done,” she said. “I helped guide the staff on what terms and language to use, and people were just so open to it and receptive to everything.”

Some of Castillo’s favorite projects during her time in Fresno include a piece on a drought and how it affected the health of rural communities.

Another favorite was about substandard housing and how white flight and racism played a role in keeping people of color in awful living conditions. She said that these two series were the ones that caught the attention of the Los Angeles Times.

Castillo said that during her journalism classes, she felt that students were taught to separate themselves completely from what they write about, when human beings do not do that.

“I don’t think it’s necessarily a bad thing to show yourself being human, especially covering really dramatic and difficult subjects,” she said.

Shors said some of his favorite work of hers post-WSU was her Los Angeles Times piece on Venezuelan migrant caravans at the Colombian border. He said she seamlessly wove her deep, personal connection to the topic and engaged with the piece from a very humane perspective without compromising journalistic integrity.

“She’s surpassed everyone who has taught her at Murrow, but she still has that same core of curiosity, initiative and voice that occupies her writing 10 years later,” Shors said.