The power of plant communication

CBD wards off worms, flies; cannabis is planted near other crops to lessen pests, disease 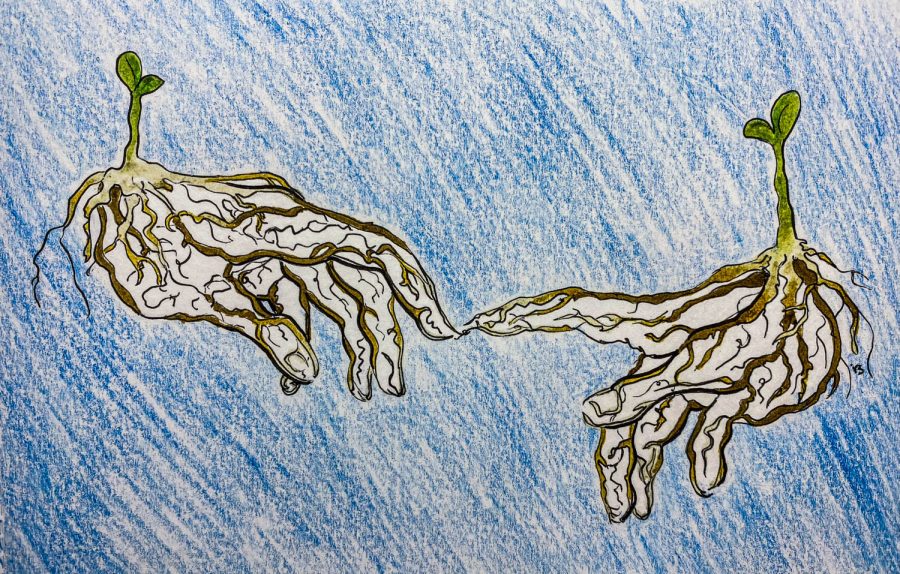 As a biology major, I tend to focus on the wonders of the animal world: species interactions between badgers and coyotes, reindeer adaptations and the evolution of the pronghorn antelope. But there is a whole other world out there: plants.

Without flora, there would be no fauna. Plants are traditionally thought of as passive beings, simply growing, blooming and becoming food for hungry herbivores. However, recent research is prompting scientists to take a closer look at the complex lives of plants; especially how they communicate.

When a plant is under attack, it warns its neighbors. Caterpillars munching through leaves, beetles boring through bark and antelope browsing on foliage are all serious threats to a plant’s survival. To deter pests, plants produce toxic chemicals like tannins.

One study conducted in South Africa discovered that damaged Acacia tree leaves emit ethylene, a volatile airborne chemical, according to Scientific American. The chemical signal travels downwind, where neighboring trees receive it as far as 50 meters away. Neighbors increase their toxic tannin levels within 10 minutes to deter nearby foragers before they arrive. Giraffes have adapted to minimize their exposure to tannins by avoiding trees downwind of those they forage on.

Another study found that sugar maples increase their tannin levels when they are near other maples with damaged leaves, according to the American Chemical Society.

We can often detect the alarm compounds plants release. Do you like the smell of freshly cut grass? Think again: it’s the plants screaming to each other that danger is imminent.

The cannabis plant produces a compound called cannabidiol, or CBD, to ward off the worms and flies that often consume its leaves, according to research conducted by biologists at Colorado State University-Pueblo. It is such an effective pest deterrent that cannabis has historically been planted near other crops, like potatoes, to lessen pests and disease.

Many plant species have unique combinations of alarm chemicals, but often the alarms can be sensed despite species barriers. Tobacco plants respond to the alarm signals emitted by sagebrush, according to researchers from University of California, Davis.

Some plants have even evolved to emit chemicals that attract pest predators. When infested with worms, corn emits chemicals to attract wasps that parasitize the worms, according to researchers from Suez Canal University in Egypt.

Besides warning each other of danger through the air, plants can communicate through vast interconnected root networks, according to NPR. Trees are the most famous example. Their roots are often intertwined by symbiotic fungi called mycorrhizae — what ecologist Suzanne Simard deemed the Wood Wide Web.

Simard discovered that through these mycorrhizal networks, trees can exchange nutrients, water and hormonal alarm signals, according to Nature. So-called “mother” trees send nutrients to nearby seedlings to help them grow. Animals aren’t the only species who engage in altruism. Trees also send nutrients to injured or diseased neighbors in need. Some stumps in old-growth forests, although cut decades ago, are still alive thanks to their neighbors.

Research conducted by biologist Malcolm Campbell also suggests that trees remember, according to University of Toronto, Scarborough. Although it may not be like our complex memory, trees respond differently to threats they have encountered before, like drought, demonstrating a sort of molecular memory.

Another avenue of plant communication being investigated is electricity. Some plants produce electrical impulses when pests are foraging on them, according to Scientific American. These impulses work similarly to those of the animal nervous system, traveling through the plant and stimulating the production of defense chemicals in distant areas.

Researchers also discovered that plants emit high-pitched clicks when damaged or stressed by situations such as drought, according to researchers from Tel-Aviv University. Another experiment conducted at the university found that plants increase the concentration of sugar in their nectar when exposed to the sound of a flying pollinator species like bees. The results also suggested that plants react to man-made noise.

So, what does the science point to? Plants are not the stoic species we thought they were. They warn, nurture and support their neighbors. They listen to their surroundings and may remember events like disease and drought. Although much remains a mystery in the world of plant communication, scientists are all ears.