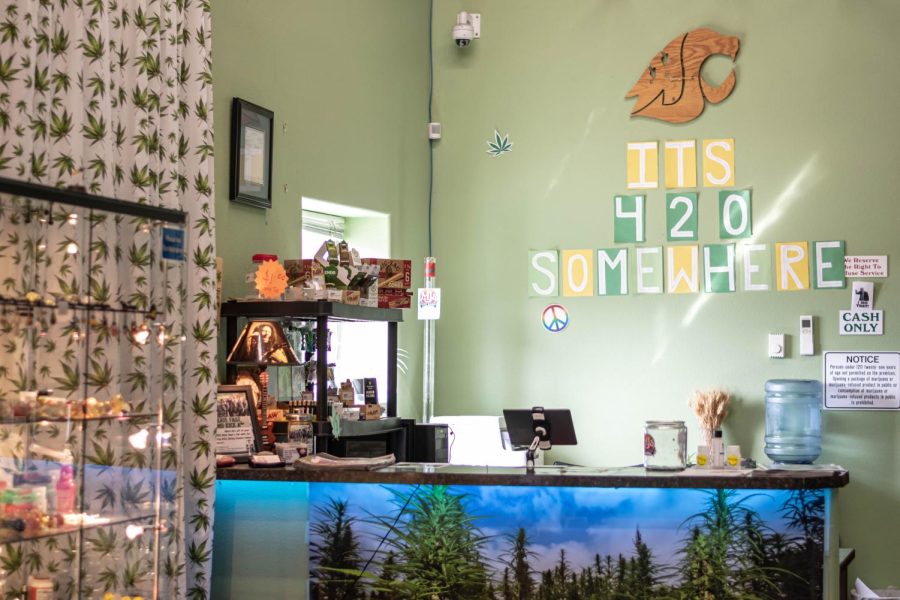 Editors Note: One of the sources will be identified only by their first name, per their request.

MJ’s Pot Shop is a local dispensary that caters to personalized customer needs while providing a calm and welcoming atmosphere for all to enjoy.

“We’re the first shop that was in Pullman, and we’re definitely a customer shop,” MJ’s general manager Terry said. “We love explaining; we are over-explaining and helping customers first, rather than just selling product.”

Terry said the shop originally opened in 2014 after the founder Mary Jane won her lottery pool and decided to put her winnings toward opening a local business.

He said one of the things that MJ’s takes pride in is their locally grown product.

“We try to support local product as much as possible; most of our product I actually tried to keep from the east side of the state,” Terry said. “So, it’s about supporting as many local farms in the local area as we can.”

Senior marketing major Emma Shriner has been going to MJ’s for a few years and said she appreciates how much time and care they put into each customer that walks through their door.

“The people there are really outgoing, and I remember going there, and I’d see the same people, and they’d remember me and ask me how my weekend was,” Shriner said. “They’d remember our conversations from last time; it feels really personal.”

In addition to their recreational sales, MJ’s is also a medicinal dispensary that accepts most green cards. The staff is very knowledgeable on the medicinal purposes of cannabis, which sets them apart from neighboring dispensaries, Shriner said. That being said, the age demographic of customers in MJ’s is a bit older than others.

“I think they’re definitely trying to branch out and expand to more college students,” she said.

Shriner remembers MJ’s doing an event on Greek Row during football season, where they passed out MJ’s T-shirts to students in the area.

“I like that MJ’s doesn’t have a lot of big flashing lights and loud music,” she said. “Their ambiance is very different.”

For the upcoming holiday, Terry said MJ’s is putting on a storewide sale, where all products will be 20% off.

“We’re also having a lot of vendors and are looking forward to seeing everybody. We have local glassblowers, and people that do beads, and artists with us too,” Terry said.