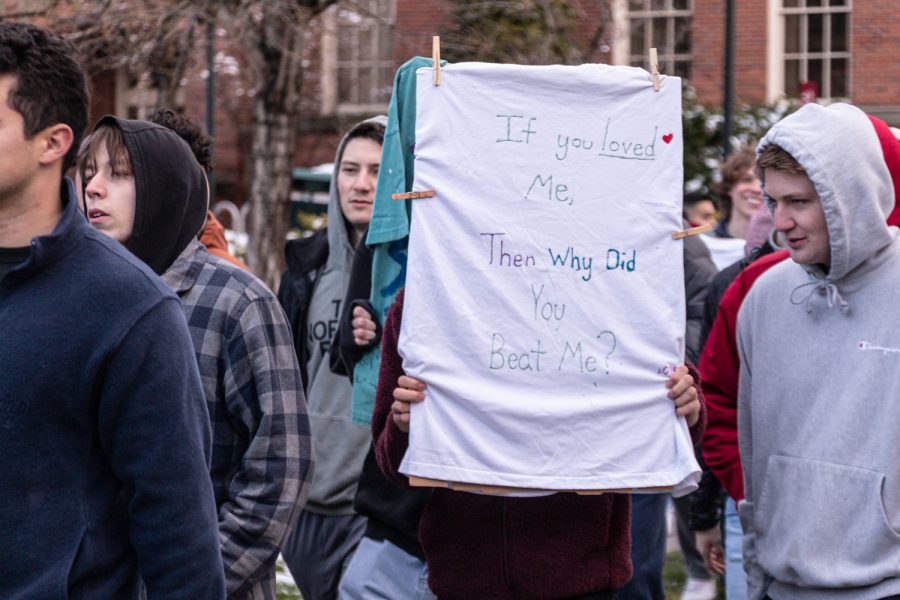 WSU students march during the Take Back the Night Rally, April 14.

Students showed up to the Todd Hall steps Thursday evening for the Take Back the Night march, where they raised awareness for sexual assault.

The event, which ended at Flag Lane, was held in honor of Sexual Assault Awareness Month, said Ky Wong, senior humanities major and Coalition for Women Students chair. This is the first Take Back the Night march since the pandemic.

Take Back the Night is a global event. Wong said it is one of the earliest efforts to bring awareness to sexual violence.

The event started in the 1970s at the University of Southern Florida and received a lot of media attention, she said.

“In 1972, a group of women at the university demanded resources and marched through campus towards safety for women,” Wong said. “As the years went by, more citizens held marches against sexual violence.”

Wong said she knows multiple people who have experienced sexual violence and that advocating against sexual assault is something that is extremley important to her.

“I really want to raise awareness, which is why we’re doing this,” she said.

Sajeenaa Jebanathan, Coalition of Women Students violence prevention coordinator, said the turnout for the event was great, and it was cool to see so many people show up.

Similar to Wong, Jebanathan said she was excited to see people coming out to support sexual assault survivors.

Emma Peirano, junior medical terminology major, said she went to the event because she wanted to support those who have been sexually assaulted.

Stephanksi said a huge part of her role at Health Promotion is to talk about sexual violence, as well as host and attend events to spread awareness about it.

“[Take Back the Night] is definitely something that falls right into what we stand for and what we believe,” Tucker said.