Eric Kim’s “Korean American: Food That Tastes Like Home” is homage to his heritage, upbringing 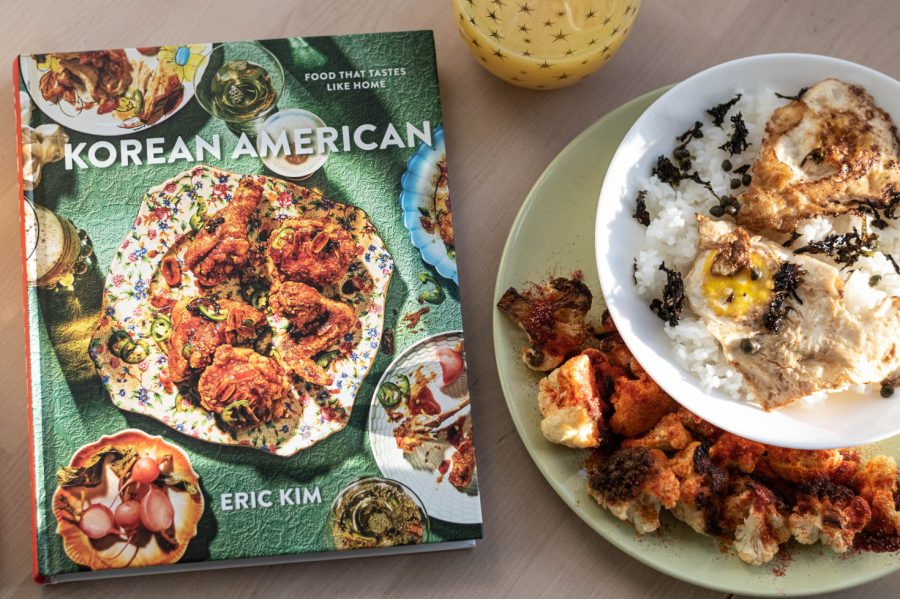 “Korean American: Food That Tastes Like Home,” complete with baby photos, is a cookbook that tells the story of Eric Kim's life, as defined by the relationship between family and food.

The first thing I really remember is this Twitter thread that starts, “When I came out to my parents, I was dating a boy who lived in Atlanta.”

In the span of six tweets, the author wrote about his relationship with his mom, struggles with his sexuality, the food science of Korean pears and tied it all back to making a galette.

All I could think was, “I’ve never read anything like that before.”

In a seventh tweet, the author, Eric Kim, @ericjoonho on Twitter, ended the thread with, “I guess this is the prequel:” and a link to a personal essay and recipe titled “I Came Out to My Parents Over Kimchi Fried Rice.”

A month later, he replied to the thread again. “And here’s the sequel:” this time linking to his personal website, with the preorder link for his then-unreleased cookbook.

Thinking about it now, what drew me into Kim’s writing was the way every essay sounds like a love letter to the topic he’s writing about – his mother, kimchi, old cooking shows. It’s all so personal and poignant, I sometimes feel like I’m intruding by reading it.

At the time I learned of him, I had just begun writing a personal essay about dinners with my late dad, and the cultural significance of family dinners. The driving point of my essay was that food, everywhere, is an act of intimacy. Cooking is something that’s hard to learn alone, so when we cook we carry with us all the people and things we learned from.

Kim’s new cookbook, “Korean American: Food That Tastes Like Home,” shares this same premise. The book is another love letter of his: this time to his cultural identity and the two halves that comprise it, and again to his mother, their relationship and her cooking.

“I have come to understand my identity not just as Jean’s son,” Kim wrote in the introduction, “but also as someone who has always had to straddle two nations: the U.S. (where I’m from) and South Korea (where my mother is from). Too often I have felt the pangs of this tug of war: am I Korean or am I American? Only recently have I been able to fully embrace that I am at once both and neither, and something else entirely: I am Korean American.”

He regularly refers to his mom by her name, Jean, which he has explained is a personal choice. He’s always wanted her to be viewed as a person in her entirety, instead of as an abstract figure or “immigrant mom trope.”

Much of the book was written alongside her, or with her help. Often, recipes include footnotes of Jean’s tips or descriptions of how the recipe varies from her version.

Kim also noted the recipes may not live up to some people’s standards of “authenticity,” but that’s because these recipes are products of an immigrant family in Atlanta, working with what they had to make food that tasted like home.

“These recipes are Korean American because the people who cook them identify as such,” he wrote. “In this vast, expansive world, this is just one story in the pantheon of Korean American cooking.”

For this column, I chose to make two of Kim’s simpler recipes. I wanted readers to become familiar with the book’s flavor profiles, without giving away for free the recipes that truly make “Korean American” special. As much as I would love to demonstrate caramelized-kimchi baked potatoes or soy sauce fried chicken with jalapenos, I’m better off making those on my own time, and so are you.

If you aren’t yet familiar with how good eggs, rice and soy sauce are for a lazy meal, you’re sure to learn and come to love them. The shining star here, however, is the cauliflower. I had no idea how well the gochugaru, smoked paprika and vegetable oil would blend together, but it’s seriously so chef’s kiss.

For recipe notes, I found high heat was too much for the eggs and resulted in the yolks being cooked too thoroughly. I think it works better over medium, but high is worth trying, even just once, for the sake of following the recipe. And for the cauliflower, my oven’s broiler doesn’t work, so I just set my oven to 350 degrees and roasted it on the middle rack. I assume via stovetop would’ve worked fine too.

All of the ingredients used can be bought here in Pullman.

For details on where “Korean American: Food That Tastes Like Home” is available for purchase, you can visit his website at erickim.net/cookbook.