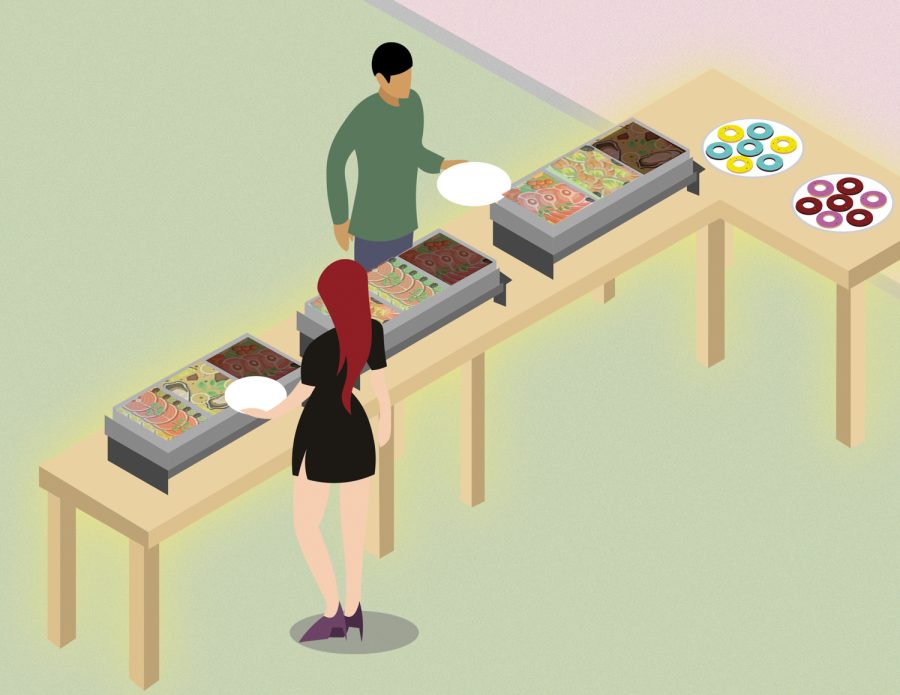 “I’m really happy about [the food festival],” IBUS Club President Christian Wilgis said. “A little worried [we were] going to run out of food.”

On April 13, the IBUS hosted its International Food Festival to showcase different clubs’ food and culture.

“My mom’s from Germany, so I grew up with a lot of this kind of food and this is usually a staple lunch kind of thing, along with potato salad,” said Klarissa Cone, german club out-reach chair.

The booth served a drink called spezi, a mixture of 50-50 Coca-Cola and Fanta drink.

“It has an interesting taste,” Cone said. “It’s like its own flavor.”

Cone said when she first heard about speize, she questioned why someone would want to mix the two sodas. After giving the drink a chance, she unexpectedly enjoyed it.

The German Club also had pretzel rolls and sauerkraut. Cone said there was a cucumber salad with traditional German spices, Kinder chocolate and Haribo gummies, because Haribo originates in Germany.

On the other side of the room, Italy’s table had a treat for people with a sweet tooth.

Giulia Vianello, IBUS club marketing vice president, brought Italian desserts because she is from Italy and wanted to add representation to the event.

Vianello said her table consisted of an Italian sweet bread. One was traditional, consisting of different fruits and the other was chocolate.

However, because most people don’t like the fruits in the traditional bread, she brought the chocolate one along.

“[The chocolate] is usually more popular, but it’s usually around Christmas time,” Vianello said.
“So that’s when it’s the most traditional way of eating it.”

Other clubs in attendance shared their cultural food, like the Slavic Language Club with a selection of cookies mostly from Eastern European countries and the Japanese Club, which brought multiple flavors of rice crackers.

Wilgis said the inspiration behind this event came from the club wanting to connect with different regions of the world.

Wilgis said there are multiple members in IBUS who are hoping to study abroad or are part of the booths at this event and are studying foreign languages.

“We wanted to kind of bring it all together for one big event this semester,” he said. “No better way to do [that than] food. [It is] something that’s really special about the world and cultures.”

“Building international networks is something the IBUS club focuses on a lot,” he said.

He enjoyed meeting people interested in global learning, studying abroad or pursuing a global career and connecting with people looking to build connections and learn about the world.

Throughout the night, people chatted and got to know one another while music from different cultures played in the background.

“We have a collaborative playlist with a bunch of different languages. Each club has gone around adding some songs,” Wilgis said. “I don’t think there’s any English music on [the playlist].”

“I love trying new foods,” Thomas said. “My mom grew up in a bunch of different places all over the world, so it’s kind of second nature to try new things.”

As someone with a sweet tooth, she enjoyed the desserts Vianello brought from Italy. She said she also enjoyed the Japanese club’s food because it was on the sweeter side.

Thomas said she was unaware this event was going on until the last minute. A classmate told her about it, and she instantly decided she wanted to go and try new food.

“Best thing ever,” she said.