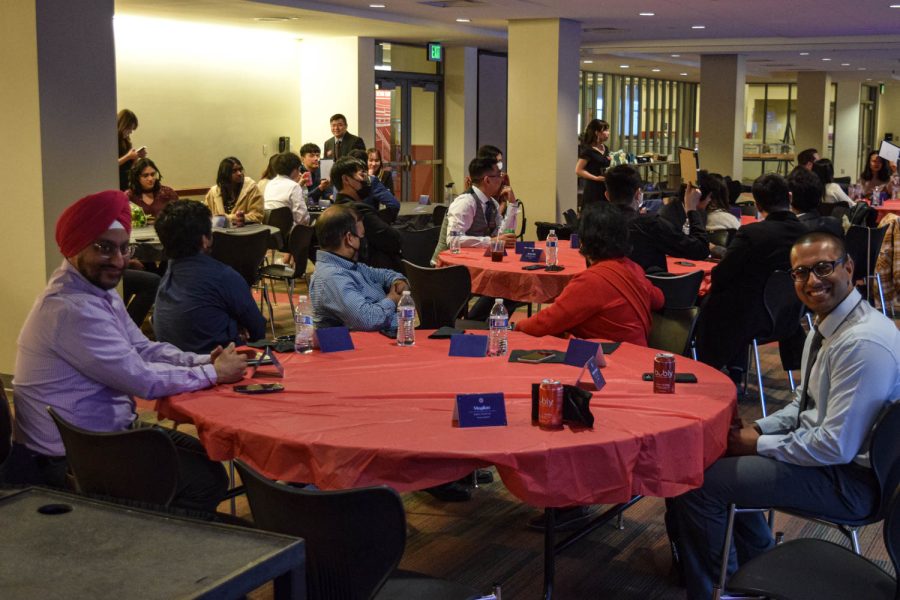 The Indian Students Association and other guests celebrate the ISC End of year Gala.

Gabrielle Adamma (she/they), ISC Public Relations/Marketing Co-chair, organized the event, bringing together the various student councils that are a part of the ISC.

The Vietnamese, Taiwanese, Indian, Indonesian and Sikh Student Association and their representatives were present.

The event was black tie optional with every member dressing formally.

“The thought comes from wanting to give back to the community,” Adamma said. “To say thank you for all the work you’ve done for the international students and local students.”

Adamma said their favorite part of doing this event was seeing it all come together.

“At one point these were all just words on paper, and now it’s all come to life,” they said. “It’s a wonderful experience.”

The night started off with Adamma’s introduction congratulating the various student councils and speaking about achievements the ISC has made throughout the year.

The award ceremony called the representatives from each of the councils to the stage and a total of four awards were presented.

The Best Registered Student Organization award was given to the Indian Student Association for all the hard work they put into organizing their events and enriching the community.

The Best Event award went to the Taiwanese Student Association for the widely received Chinese/Lunar New Year and Night Market.

As an important member of the ISC and ISA, Gosal said he is very honored to have received the Ka Yan Tang award.

“I can talk about it in two ways, one I am a treasurer and that’s a role I have to fulfill. I do have my responsibilities,” Gosal said. “Secondly, this is a broader thing, it doesn’t matter what particular role I’m in, at the end of the day we just want to contribute to the community.”

We all work as a team and interchange our roles and do whatever is needed for any task, Gosal said.

“We believe in inclusiveness, and we believe that the more diversity we have, the more fun we have,” said graduate student Kulpreet Kunal Singh, public relations head of ISA.

This ceremony was followed by an international trivia night that tested each council’s knowledge of each other’s culture. It was a game that provided unity and cooperation, which was a big theme for the night.

After a successful year for all of its members, the ISC ultimately celebrated the night with laughter, joy and commentary on the triumphant return to on-campus events.