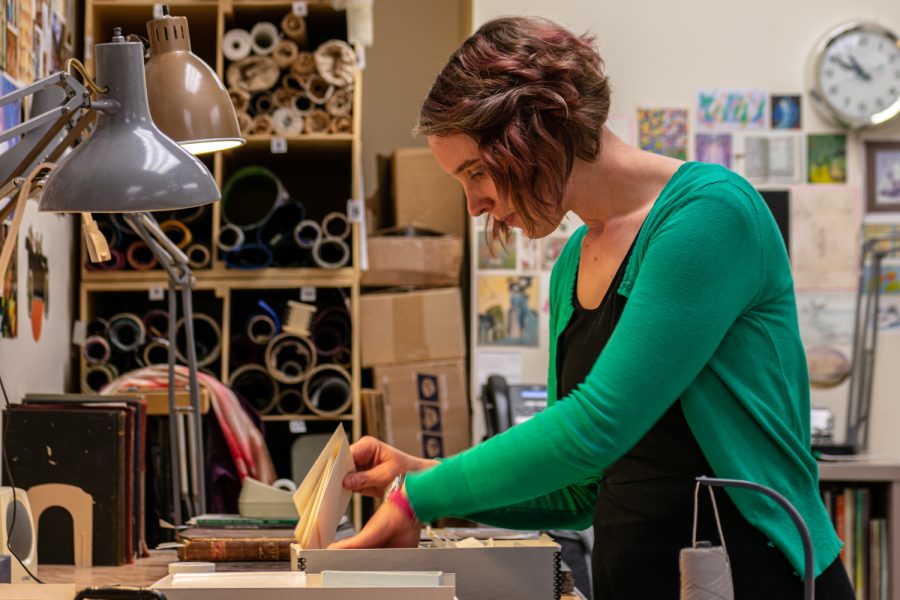 Linnea Rash is lowered deep into the basement of WSU’s Terrell Library, where she walks among endless stacks of weathered books and maps. The hushed silence of her laboratory is broken only by the gentle scraping of scalpel tools and the crinkling of torn, yellowed pages, ready to become whole once more.

Ten years ago, Rash became the sole conservator for WSU and has mended over 1,000 historical documents, preserving pieces of history for both researchers and the public.

After her first time cleaning maps as an intern for WSU’s archives, Rash said she could not believe she could get paid to work with history and crafts.

“It allows me to work with my hands, which I really enjoy, but also in a way that is challenging and feels really purposeful,” Rash said. “When I’m working on things here in the archives, it’s not just for other people in my department – it’s also just for the future. I think about researchers who will be looking at this map in a hundred years, and I helped make that happen.”

Rash said it is fulfilling to keep materials from deteriorating and allow people to learn from them. She recently pieced together a map of Central Washington’s irrigation canals that is over 100 years old, mending the tears with Japanese tissue paper.

“This map was in about six different pieces,” Rash said. “Putting it all back together and sitting there lining up exactly where the tears were – lining up both sides of it so that you can’t even tell that it was ever broken – gives me a lot of satisfaction.”

Her favorite project she completed is a book of Gregorian chants from the 1500s, she said. Rash said the woman’s name printed on the cover and the book’s small size indicate the woman must have carried it with her in her pocket as she went about her day.

Rash said people always come to her with their “book problems.” When Trevor Bond, associate dean for digital initiatives and special collections, mentored Rash during her first internship at WSU, he said she had a natural inclination for organization and problem solving.

“Working in libraries and working in archives is very much a service profession,” Bond said. “There’s a real emphasis on doing things for the public, so [Rash has] always been really good at that. When people have random questions about caring for their family’s scrapbook or whatever else, she’s always glad to share her expertise and help others out.”

Sheryl Nelson, Rash’s mother, said she has always been good at “taking care of the little things,” and Rash’s role as a conservator matches her personality perfectly.

“I can tell that she’s really into what she does just because she’ll talk at length about it and tell me the details and just has a smile in her voice,” Nelson said.

Rash did not always know she wanted to become a conservator. When she was younger, Rash said she aspired to be a teacher during the week and a ballerina on the weekends.

Now, Rash said she is continuously learning how best to conserve materials by attending workshops, like a week-long class on rebinding cloth-bound books at the American Academy of Bookbinding in Telluride, Colo.

Bond said Rash passes on her knowledge of bookbinding and preserving historic treasures by holding her own workshops at WSU, training the next generation of conservators. Bond recalls when Rash hosted the Tribal Digital Stewardship Cohort Program and trained archivists and curators of Native American artifacts to create custom book boxes with bone tools and sharp scalpel blades.

“You need them to be really sharp,” Rash said. “Whatever rock-paper-scissors told you, paper will defeat a blade. That’s why you’re not allowed to use your mom’s sewing scissors on your school project.”

Rash said it is often difficult being the only conservator at WSU. Although Rash is forming a network of fellow “history nerds,” she said she does not have many people to consult when she is struggling with a project. She sets these projects aside for her future self, who may know what to do.

Although much of Rash’s work is behind the scenes, her commitment to learning new skills and involvement in public outreach make a difference in the community, Bond said.

“In the end, everything ends up better than when she started on it,” he said.